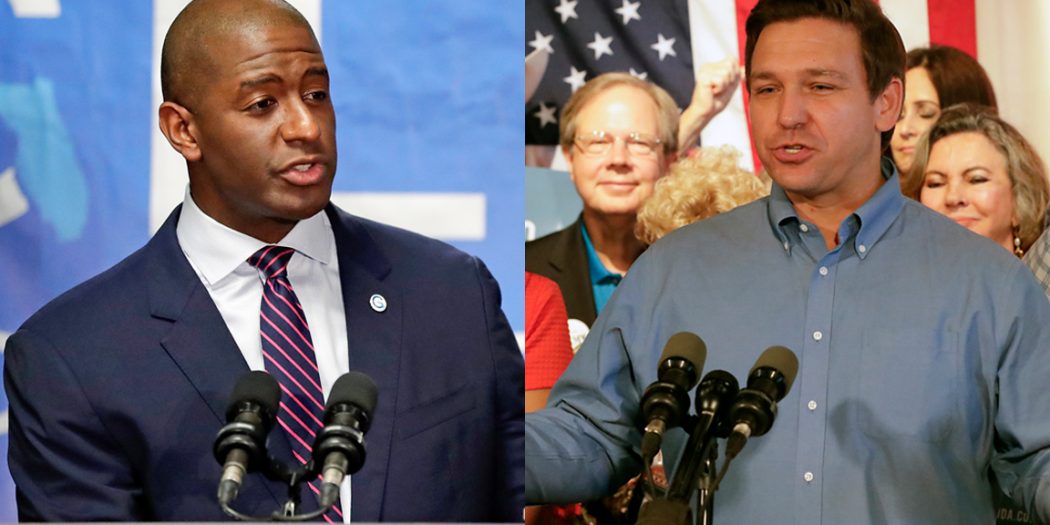 In the 18 years Chloe Parrish has been alive and living in Florida, Republicans have occupied Florida’s governor’s mansion.

Parrish, a University of Florida political science student and the Gators for Gillum president, said she is ready to see change in Tallahassee.

She remembers growing up in Jacksonville and seeing how what she perceived as a lack of resources and funding affected her public school education.

Parrish switched elementary schools because of overcrowding, two of her high school teachers moved to Europe for better pay and she frequently had to use online textbooks because her schools did not have enough physical textbooks.

Now, Parrish wants to witness not just any Democrat, but Tallahassee Mayor Andrew Gillum  sworn in as Florida’s next governor in January. She said she has been inspired by his stances on education and gun reform.

In order to move into 700 N. Adams Street in Tallahassee, Gillum will have to defeat the Republican nominee, former U.S. Rep. Ron DeSantis, Reform Party nominee Darcy G. Richardson and a handful of unaffiliated and write-in candidates. That task, however, has been a challenge that Democrats have not been able to accomplish since 1994 when Lawton Chiles defeated Jeb Bush.

And supporters of DeSantis are prepared to extend the 20-year Republican governorship by at least four more years.

Gabriel Thompson, an 18-year-old economics student at Santa Fe College, has interned for the DeSantis campaign since the primary in hopes of helping DeSantis win in November.

Thompson said that he sees DeSantis as a well-rounded candidate and likes his policies that would lower taxation and regulations for corporations.

“Ron DeSantis’ policies are going to continue job creation in Florida and continue our growth trend,” Thompson said. “Gillum’s idea of increasing the welfare state will increase taxes, which will make Florida unappealing for people who want to move here and start businesses here.”

Volunteers like Thompson and Parrish are working hard to encourage as many people as possible to vote for a race in what some are anticipating to come down to a “small margin.”

What has happened in the past 20 years?

The Republican Party has dominated gubernatorial elections in Florida over the past 20 years, despite having 245,746 fewer registered voters than the Democratic Party in 2018, according to Florida Division of Elections records.

Since 1998, the Republican Party has won every Florida gubernatorial election, all of which had a voter turnout rate near 50 percent:

The last time a Democratic candidate won the gubernatorial race was in 1994 when then-Gov. Lawton Chiles defeated Republican candidate Bush with 50.8 percent of the vote to Bush’s 49.2 percent.

In that election, voter turnout was at 66 percent, according to the Florida Division of Elections website. That same year, voter turnout during the primary election was at 29 percent.

In the state of Florida, the governor is elected during mid-term elections every four years, or elections when the president is not elected. The governor can serve up to two consecutive terms before being ineligible to run for re-election, according to the state constitution.

During the 2018 midterm primary election, over 3.5 million ballots were cast, amounting to about 27.46 percent voter turnout, according to unofficial numbers from the Florida Division of Elections website. This is the most ballots cast in a primary election in Florida history.

Pyche said, “[Voter turnout,] whether it’s low or high, is an indication of how many people are participating.”

“We were extremely encouraged, inspired and pleased by the historic voter turnout for the primary election,” said Caroline Rowland, spokesperson for the Florida Democratic Party.

Setting up the race

Gillum and DeSantis’ wins in the August primary election are setting up a progressive-conservative showdown in November.

Gillum, who has earned the support from U.S. Sen. Bernie Sanders and former President Obama, won the Democratic primary race in August with 34.36 percent of the vote, defeating six candidates, including former U.S. Rep. Gwen Graham, who earned 31.25 percent of the vote, according to unofficial numbers from the Florida Division of Elections.

His nomination is historic: He is the first African American to win a major party’s gubernatorial nomination in Florida.

At the end of the primary election, Graham led in 44 counties, compared to Gillum’s 18 counties and Miami Beach Mayor Philip Levine’s 5 counties, according to unofficial numbers.

However, Gillum built leads in heavily populated counties like Broward, Miami-Dade and Duval to pull ahead of the other candidates.

DeSantis, who is endorsed by U.S. President Donald Trump, beat out a field of eight candidates, earning 56.49 percent of the vote, nearly 20 percentage points more than his runner-up, Commissioner of Agriculture and Consumer Services Adam Putnam, according to unofficial numbers.

DeSantis led the candidates in 39 of Florida’s 67 counties at the end of the night. Putnam led in 28 counties.

With only five days left before the Nov. 6 general election, several polls show Gillum barely leading DeSantis by a few percentage points — well within the margin of error.

Caroline Rowland, Florida Democratic Party spokeswoman, said they are hoping to see voter turnout levels similar to that of a presidential election, especially considering the relatively high turnout for the 2018 primary election.

“It shows that the base is motivated and fired up,” she said. “It showed all this momentum and passion turned into votes.”

She also said it will require a lot of groundwork in order to reach all voters and see the results the party wants.

Republican Party of Florida spokeswoman Meredith Beatrice declined to comment on the story or their campaign strategy.

“[These people] are important voters who are not always inclined to vote for other Democratic candidates because they don’t feel like they will care about their communities,” she said.

Ultimately, Rowland said the party is hoping momentum from the primary will lead to an even larger turnout for the general election.

“Ideally, we would like to see 100 percent voter turnout,” Rowland said. “We are expecting to see turnout that we would see in a presidential election.”