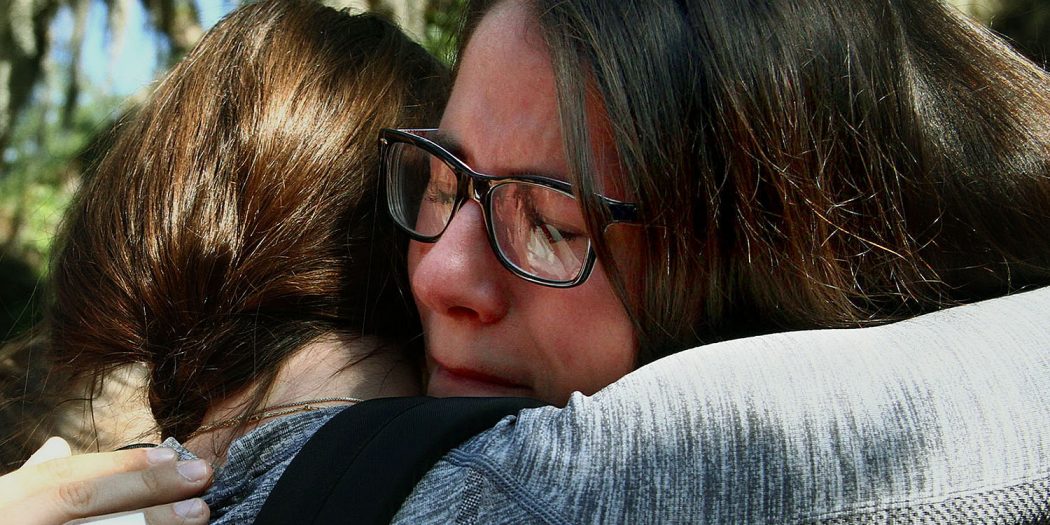 Morgan Green, a Jewish UF student from Pittsburgh receives a hug from another student at the Stand Together Against Hate Solidarity Vigil Monday at Turlington Plaza. (Gabrielle Rueda/WUFT News)

Mourners with lit candles gathered around a small blue canopy on Turlington Plaza Monday afternoon to honor the 11 lives lost in the shooting at the Tree of Life Congregation Synagogue in the Squirrel Hill neighborhood of Pittsburgh, Pennsylvania.

A group of Jewish students sang “Oseh Shalom” to those heads held low in respect while others were close to tears.

“Every single soul in this world has a special song,” said Rabbi Aaron Notik of Chabad UF. “When someone is so brutally taken from us, it’s in our hands to keep singing their song, to keep their song going so that it never ever stops.”

The vigil on UF campus was organized by the Jewish Student Union, Chabad UF and UF Hillel.

“Our safe spaces have been threatened,” Grossman said. “Until we stop accepting people just for their similarities and start to embrace each other because of our differences, this will not change.”

Colin Silverman, a 22-year-old UF accounting major and president of the Jewish Student Union, said he has a sister who moved to Pittsburgh. His family is safe but he knows people who were affected by the shooting.

Silverman said there is a Go Fund Me page for the Tree of Life Congregation and invites the public to celebrate Shabbat.

“The 11 lives that were lost were lost celebrating Shabbat,” he said. “And the most we can do is honor them on that holiday.”

“Everyone’s going to feel like we need to be more protected,” said Galper, “and I feel like that’s going to take away the spirituality of it all.”

Silverman teaches Sunday school at Congregation B’nai Israel and said an armed guard was stationed at the synagogue this past Sunday.

“The answer is definitely not arming our places of worship, our places of safety,” Silverman said. “Those institutions should not turn into armored stations.”

Avi Snyder, executive vice president of Chabad UF, said people should not let people like the gunman scare them. “The moment they scare you is the moment they win, and that’s what they’re trying to do.”

Gabrielle is a reporter for WUFT News who can be reached by calling 352-392-6397 or emailing news@wuft.org.
Previous Oct. 29, 2018: Evening News in 90
Next Organic Farmer: Immigration A Top Issue For Amy Van Scoik