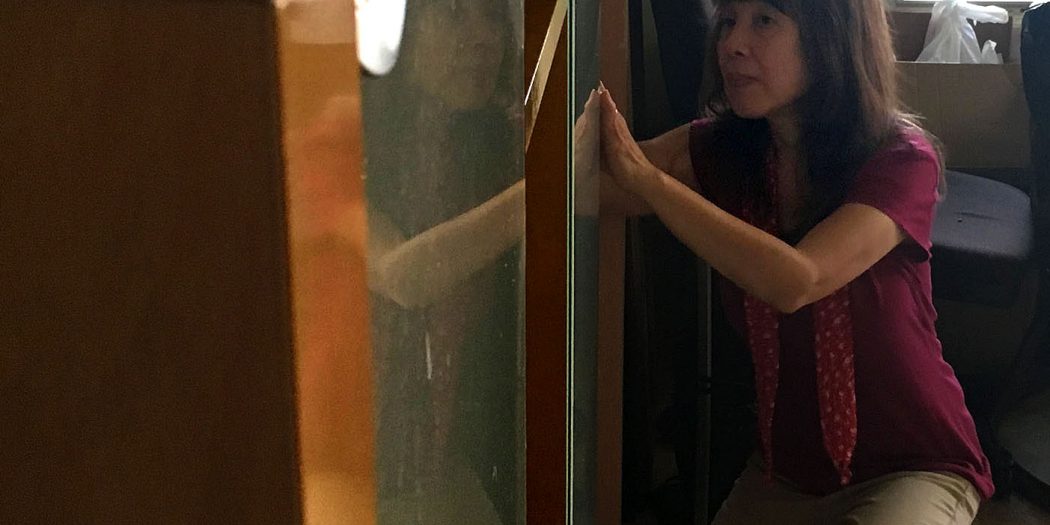 Minh-Trang Le, 62, cleans a shelf inside A Nan Temple on Sunday. Members of the temple were preparing for the Buddha Statues Dedication Ceremony on Oct. 28. (Gabrielle Rueda/WUFT News)

A new member is joining A Nan Buddhist Temple, but may not get there in time for the welcoming party.

At 32-feet-tall, the Birth Buddha statue will join three other similar-sized statues in the meditation garden outside the temple at 2120 SW 15th St., said Minh-Trang Le, a temple member.

Birth Buddha was scheduled to arrive from Vietnam in Feb. 2017 with the other three, Le said, but production delays pushed back delivery of this fourth figure by several months.  The three statues currently displayed are the Enlightenment Buddha, at 23-feet, Nirvana Buddha and Avalokiteshvara Bodhisattva, both at 32-feet.

Le joined the temple in 2010 and said her mother was Buddhist and her father was Catholic. She said the A Nan Temple follows the Vietnamese tradition of Buddhism with all services conducted in Vietnamese and added that anyone is welcome to enter the temple.

“Our monk used to say all the time that we don’t discriminate any religion,” Le said. “He welcomes everybody.”

Clement Anson is not Vietnamese but attends A Nan Temple as a member because he connects with the people. During service, when other members sit on pillows on the floor, he said he sits in the back and meditates.  Anson was raised Buddhist and said, for him, Buddhism is more than a religion. He defined being Buddhist as being “mad”: M for leading a moral way of life, A for awareness of one’s thoughts and D for developing wisdom through learning and understanding.

Despite their newest statue’s absence, the temple members plan on having a dedication ceremony for Birth Buddha on Oct. 28 featuring performances by Vietnamese musicians such as Thanh Tuyền.

Le said the statues were carved from granite and shipped from a company in Saigon in the Binh Duong province in Vietnam, which helped reduce costs compared to U.S. production. The three statues in place at the temple cost $216,000, with $165,000 for shipping. She said the Birth Buddha statue cost $50,000.

The temple’s founder and monk, Venerable Thích Đức Thông, raised money by hosting holiday events such as the Lunar New Year and Buddha’s birthday, among others. Le said that after three years, the temple continues to raise money for the cost of the statues.  She said the temple plans to have a fundraiser during the dedication ceremony to help pay for completion of the garden and the mortgage on the property.

Three of the four statues commemorate moments in the Buddha’s life such as birth, death and his enlightenment. The enlightenment period represents when the Buddha meditated under a tree until his awakening, said Mario Poceski, a professor of Buddhist studies and Chinese religions at the University of Florida.

“The story of his life assumes a great significance in the belief system of his follower,” Poceski said. “Birth and death are major events in every person’s life.”

He explained that Buddha’s enlightenment, or awakening, was the most symbolic of his life and the moment when “the Buddha becomes ‘the Buddha’.”

“But it is a title; it means ‘one who’s awakened’,” Poceski said. “So really, the story of Buddhism, in a way, starts with Buddha’s awakening in India and then continues from there.”

The only temple statue not related to specific moments in Buddha’s life is Avalokiteshvara Bodhisattva, which Le said represents the lady of compassion and has a pink lotus flower beneath it.

Erecting the large statues reflects Thông’s gratitude for the freedom to practice and to teach his religion within the United States, according to Le.

“In Vietnam, you don’t have the freedom to practice religion, so when he came here it was easier for him,” said Le. “If you want to teach, you have to follow the guide from the government. You have to teach the way they want you, not the way that it’s supposed to be.”

The temple was founded by Thông and his sister, Su Co Nguyên Quang, in 2010. She moved to Gainesville in 2016 and they run the temple together.

Gabrielle is a reporter for WUFT News who can be reached by calling 352-392-6397 or emailing news@wuft.org.
Previous Alachua County Responds To Growing Suicide Trend With Community-Wide Training
Next Newberry’s North and South: Two Sides, One History And A Path For Healing