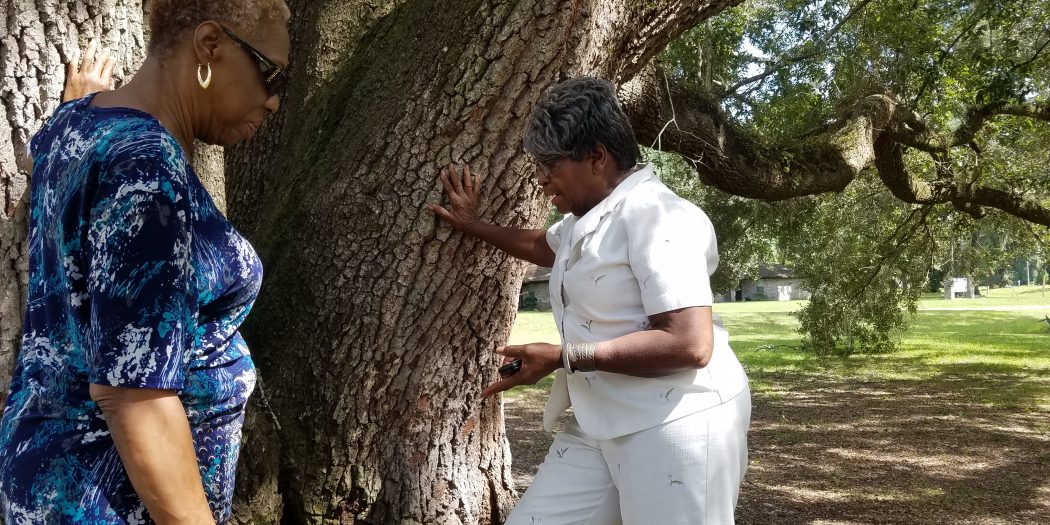 Newberry residents Judy Hasan Lewis, 65, and Gwendolyn Hunt, 80, share their thoughts next to this historic oak. The tree is said to be the sight of Newberry’s final lynching. (Rebecca Santana/WUFT News)

Newberry’s North and South: Two Sides, One History And A Path For Healing

North versus South: A dynamic that has plagued this country since long before the Civil War, and a dynamic that plagues Newberry even today. In a town where race-related atrocities are an integral part of its history, racial tensions remain, and though they have evolved, there is still a clear separation.

Mayor Jordan Marlowe said Newberry is currently trying to reconcile past atrocities, particularly the Newberry Six killings that occurred in Aug. 1916 when six black members of the community were lynched. Marlowe hopes that this process will act as a bridge, bringing a separated community together as best they can.

“We don’t want to forget, but we also need to look forward to our future.”

City officials and members of the Concerned Citizens of Newberry group initiated a series of meetings to involve the community in Newberry’s reconciliation process. The first meeting on Sept. 20 provided background on the 1916 lynchings by local historian Janis Owens, who explained that there is more than one side to the story. The city plans to continue hosting events devoted to healing the town. A community dinner is scheduled for Nov. 18 at Lois Forte Park, where local pastors are invited to speak about healing, forgiveness and tolerance, Marlowe said.

Kenneth Hunt, distant relative of a Newberry Six victim, said the process will benefit the next generation, including his 17-year-old daughter. “We’re all about growth, and we’re moving forward,” he said. “We don’t want to forget, but we also need to look forward to our future.”

And while some citizens feel this process will help the city heal, others feel it will only lead to more resentment. Eighty-year-old Evelyn McKoy has lived on the south side of Newberry her entire life.

“People have lots of hatred in their hearts about what happened a long time ago,” McKoy said. “You can’t make what happened right. There’s no way, and if you start stirring that pot, that pot’s gonna run over.”

Gwendolyn Hunt has witnessed a long history in Newberry as a resident of the north side since the early 1970s.

“We are here, but a lot of times we’re looked over,” she said.

Hunt said the north part of town suffers from a lack of development compared to the new homes and businesses in downtown.

Born and raised in Newberry, Judy Hasan Lewis also experienced a lot changes in her 65 years.

“The south side has come up, and that’s where you get the nicer homes and neighborhood development,” she said. “Over on the northwest side there’s not anything done.”

Lewis feels Newberry’s separation is deeply rooted in events like the Newberry Six and other racially charged issues. She recalled a time when black citizens avoided Newberry’s downtown area for fear of “severe consequences.” She said that past racial tensions, though less obvious today, never disappeared.

“And that has kind of lingered over because you don’t have a lot of black people now that go downtown,” Lewis said. “It’s something you don’t do.”

Hunt and Lewis appreciate that Newberry has made an effort to address the Newberry Six. They believe talking about it will help the city heal, and like Marlowe, they hope that the process will bring the two sides a little closer together.

“I definitely appreciate them, whatever they’re going to do to let them know it did happen for the generation that’s coming,” Hunt said. “You can’t forget it, but you got to go forward. Don’t keep the hate in you. Keep going.”

McKoy and Hunt are best friends, and while she’s seen the inequality, McKoy questions whether Newberry should go through a reconciliation process for 100-year-old lynchings.

“There’s no use to bring it up. If it’s history, it should be in the history books,” she said.

McKoy isn’t the only one who feels this way. Multiple people voiced similar concerns when the city first started the discussion process, Marlowe said. But Marlowe and other community leaders decided this was an opportunity for healing.

And for Lewis, that healing is a vital first step for the community’s future.

“Your history always is gonna affect your future,” she said. “It carries a certain stigma along with it.”

Rebecca is a reporter for WUFT News who can be reached by calling 352-392-6397 or emailing news@wuft.org.
Previous Temple Members Await Newest Buddha Statue To Arrive From Vietnam
Next Oct. 16, 2018:Morning News in 90