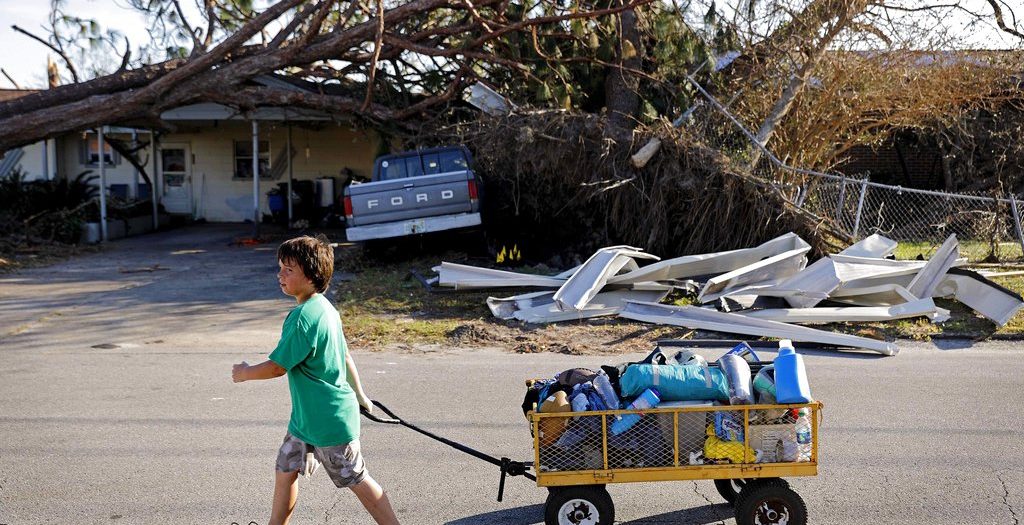 Anthony Weldon, 11, pulls a cart with his family's belongings as they relocate from their uninhabitable damaged home to stay at their landlord's place in the aftermath of Hurricane Michael in Springfield, Florida, Monday, Oct. 15. (AP Photo/David Goldman)

The Latest on Hurricane Michael (all times local):

Officials say 16 people died in Florida because of Hurricane Michael, doubling the numbers of deaths in the state The Associated Press had previously attributed to last week’s storm.

Florida officials announced the state’s updated death toll Tuesday. State officials did not provide details of how the victims’ deaths were storm-related and the AP was not immediately able to confirm those details.

Officials say 12 of the deaths occurred in Bay County, a seaside county which took a direct hit from the storm.

Cathey said Tuesday that the dead were a man and a woman living in separate homes who did not evacuate.

He said the sheriff’s office would release their names and the details of their deaths later.

The mayor says only one person in Mexico Beach is still missing. He says authorities are “almost certain” that person evacuated before Michael and just hasn’t been contacted.

Cathey says officials are “holding steady at two (deaths) and don’t expect that number to rise.”

Life in some of the hardest-hit areas of the Florida Panhandle improved drastically as widespread cellphone service returned for the first time since Hurricane Michael.

Mexico Beach Mayor Al Cathey had a one-word exclamation when his Verizon phone started working Tuesday for the first time in nearly a week: “Hallelujah!”

Verizon service also resumed in storm-damaged Panama City, where residents haven’t been able to contact loved ones or call for help.

AT&T service was drastically better in the days after Michael, but even it was spotty.

Cathey says communication problems have been his biggest problem in Mexico Beach, where destruction is widespread. He says Verizon is the dominant cellphone company in the area.

In the aftermath of Hurricane Michael, Florida Panhandle residents are struggling to locate friends and loved ones who haven’t been heard from, and it’s unclear how many people are missing.

As President Donald Trump visited the devastation Monday, the death toll from Michael’s march from Florida to Virginia stood at 17, and the search for victims continued.

Since the storm, many people have been rescued. Emergency officials said that because of widespread cellphone outages, others could be safe and just haven’t been able to tell friends or family.

Cities that were hit the hardest include Mexico Beach and Panama City, both in Florida. George Ruiz of Geaux Rescue, a nonprofit search-and-rescue operation, says authorities aren’t allowing volunteer groups into either city.

The Associated Press is a wire service to which WUFT News subscribes.
Previous Open Track Nights At Gainesville Raceway Provide Safe Lanes For Street Racing
Next Oct. 16, 2018: Evening News In 90

Gainesville is inching closer to its goal of achieving zero waste by 2040.