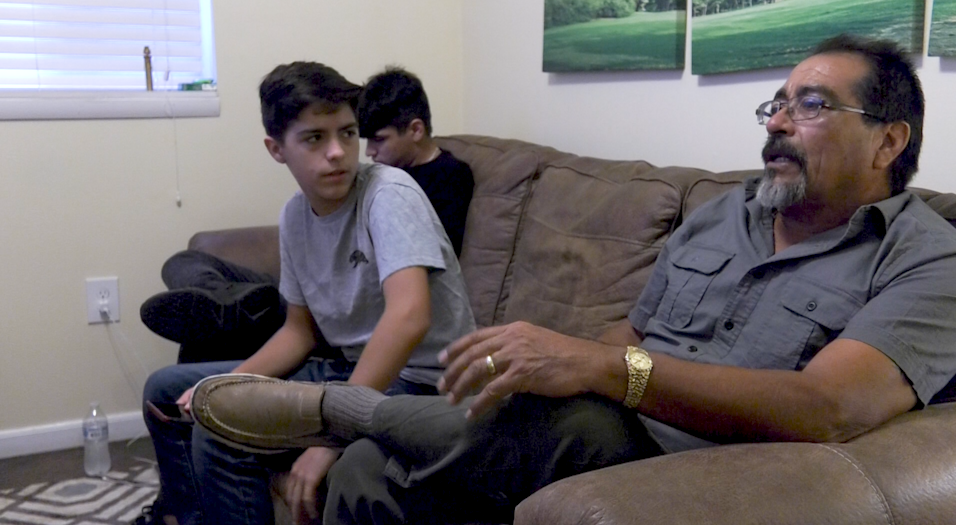 As the storm made landfall, Dallas Padilla asked his father where they will live if their home is gone. (Rachel Rhodes/WUFT News)
Home / Weather / A Port St. Joe Family Takes Refuge In Gainesville

In a living room with an armchair and a couch that only fits three, one of the children was forced to claim the ground as their seat. The other two squished in beside Donna Padilla and her husband. The small dining table for two was home to their backpacks.

They’d spent the last two days watching continuing coverage of their hometown, Port St. Joe, flash across the television screen after they evacuated to Gainesville. Their town was in the path of Hurricane Michael, the strongest hurricane to hit Florida’s Panhandle in over a century.

Facebook friends provided them with updates in real time.

“That’s a roof. Oh my God. That’s a roof,” said Padilla as she showed her husband a video on her phone.

They had family in Alabama and Georgia, but decided to follow the advice that came from news outlets not to go in that direction. So, they headed east to Gainesville.

Above: Hear this story.

Every hotel in Gainesville was booked, according to Padilla. She decided to try Airbnb to see if there were any places available.

Penny Goree, of Gainesville, received an email Wednesday morning from Airbnb that alerted her to the ability to register her rental to a list that designates it as free to evacuees. Her place was booked by Donna Padilla about ten minutes after she registered it, Goree said.

Padilla paid for the guesthouse for two nights and wasn’t aware the rental company had asked hosts if they were interested in helping victims of the storm. She didn’t know it would be free until they arrived at the property nestled in a residential neighborhood north of Hogtown Creek and Goree told her.

Goree returned the money to Padilla by going through Airbnb’s resolution center to issue a refund.

“I’m a south Florida girl so I’ve been through a lot of hurricanes down there and know what it’s like to, you know, should I run, should I stay,” said Goree. “A lot of times people stay in dangerous conditions because they don’t have anywhere to go.”

The Padilla family didn’t have much space in the rental that consisted of a kitchen, a bathroom, a living room and one bedroom, but they were safe and out of the path of the hurricane.

Padilla had been torn about whether they should evacuate or not. She had intended for them to ride out the storm in their three-story home just three blocks away from the beach.

They had only moved to Port St. Joe three and a half years ago, choosing it because of the schools, the beach and because the weather was nice there. They never expected a hurricane, said Padilla.

This is the strongest storm the Panhandle of Florida has seen in over a century. When it made landfall at 1:40 p.m. Wednesday as a Category 4 hurricane, it had sustained winds of 155 mph.

After forming in the Yucatan Peninsula late Sunday night, Michael’s winds doubled from 35 mph to 70 mph in 24 hours. When the news started reporting that Tropical Storm Michael had turned into a hurricane on Monday, Padilla began to worry.

She finally decided that they needed to leave at noon on Tuesday. She told her family to pack two days’ worth of clothing, Padilla said.

Their neighbor had already told them their fence and RV had been destroyed by the storm. The RV had been their backup plan in case their home was too badly damaged.

The rental reservation ended yesterday.  Padilla and her family planned to drive back to their home in Port St. Joe, yesterday, to see if they had anything left.

Authorities say six have died so far. Hurricane Michael weakened back to a tropical storm Thursday.

After the Eye: A Story of Recovery Along Florida’s Forgotten Coast

One year after Hurricane Michael devastated the Florida panhandle as a category 5 storm, many residents continue to rebuild the communities they call home. A team of WUFT journalists share a collection of stories that spotlight struggle, hope and perseverance.