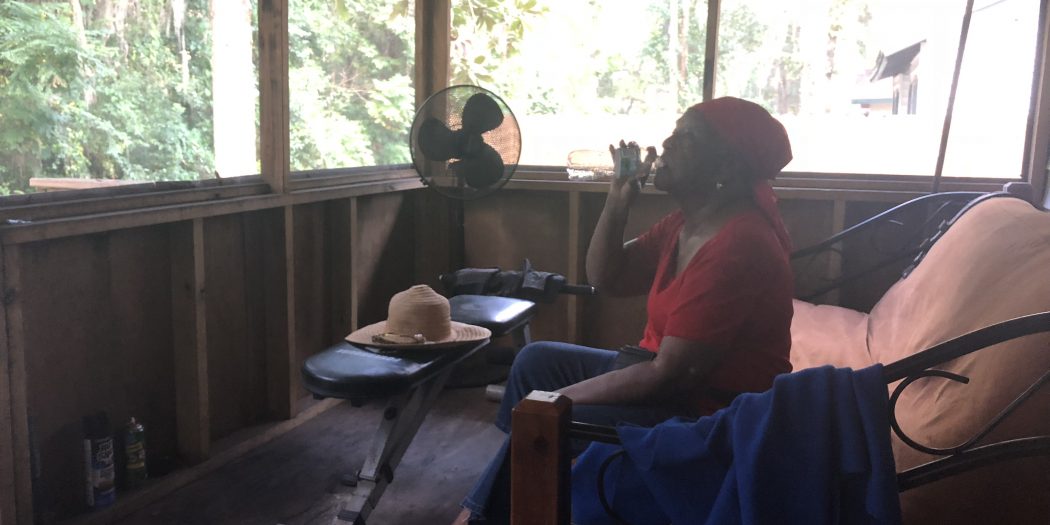 Mariah Span, 81, sits on her porch at 421 SE 12th St. reflecting on GRU rates over the years in East Gainesville. (Eman Elshahawy/WUFT News)

East Gainesville resident Mariah Span, 81, has lived at her home on SE 12th St. for a year and a half, but her frustrations with high utility rates in the area have lasted over 40 years.

The GRU Authority referendum on the November ballot will allow Gainesville residents to vote on whether GRU’s governing authority should be transferred to an independent board appointed by the city commission. State Sen. Keith Perry, R-Gainesville, said the Gainesville city commission, which currently determines GRU rates, has consistently voted to raise rates despite residents’ concerns.

“Citizens are forced to pay financially, and the lower socio-economic communities are hit the hardest by this,” Perry said.

Span has struggled to pay because of the high rates.

“It gets worse during certain times of the year,” she said. “When it’s winter time, they don’t care if you’re poor.”

Ellis said higher than average utility bills could be attributed to, but not limited to, “weather, age of home, efficiency of the home and/or appliances, the number of people, the size of home and the [consumption] habits of residents.”

Span has used GRU’s payment plan in the past, but now her family helps.

“I’ve never had the electricity go out in this house because my kids are grown now, and I’ll ask them for a few dollars to help me out,” she said.

But Span’s rates are going up again.

The city commissioners this summer voted 4-3  to approve a 2 percent rate increase that went into effect Oct. 1. The GRU Authority Referendum — if passed — would remove the commission’s ability to raise rates and give that right to the board that commissioners would appoint.

“This is the most important vote people in Gainesville will take this year,” Poe said. “They will either choose to retain control over the utility, or they will choose to give it up. The only difference is that when you have a problem, you can call your elected officials — they’ll pick up the phone and they’ll help you. When it’s taken away from the city commission, we will no longer have that ability, we’ll no longer have the ability to make a change and [the referendum] will lead to the eventual selling off of the greatest asset.”

A Gainesville political consulting firm is spearheading the campaign against the referendum.

“This is one of the most aggressive, unethical attacks on local government that I’ve seen,” Eastman said. “He says the city is using the budget for frivolous spending when actually, when we pay our bills the profit goes back into our community.

Perry said he placed an ad that was a “little controversial,” calling the transfer of GRU revenue to the city budget a “slush fund.”

“The reason I referred to it as a slush fund is because they have pet projects of things that are beyond what anybody would call the core responsibility of city government,” Perry said.

At a city commission meeting held July 19, Commissioner Harvey Ward said, “This idea that there’s a piggy bank over here that we’re just stealing from is frankly not the correct characterization.”

Darin Cook, CEO of Infinite Energy and former Chair of the Utility Advisory Board, said at a public debate held last month that utility rates are likely to go down if the referendum passes and grants sole control to an independent board because a nine-member board of appointed energy experts would decide on utility rates, not politicians.

GRU board member and UF Law Professor Joe Little argued that the ballot language itself is flawed.

“The ballot language that the voters will see is misleading and deceptive,” Little said. “Voters should not be required to vote on this.”

According to Little, there is no statute in the referendum that requires the utility authority to transfer any additional funds they receive to the city, but grants the authority the ability to reduce the transfer of funds to the city by 3 percent.

While politicians and city stakeholders spar over rising utility rates and government bureaucracy, GRU customers saw a 2 percent increase in rates October 1. This is the second rate increase in as many years, even though rates were reduced after the purchase of GREC, which is now the Deerhaven Renewable Generating Station.

As for Span and other residents of East Gainesville, the fate of who will determine their utility prices will be decided in November during the General Election.

“I’ve been thinking about which way I’m going to vote [for the referendum] this election, and I still don’t know,” Span said.

The question for area voters: Do they want to retain the right to directly vote out an elected official who votes to raise their utility rates?