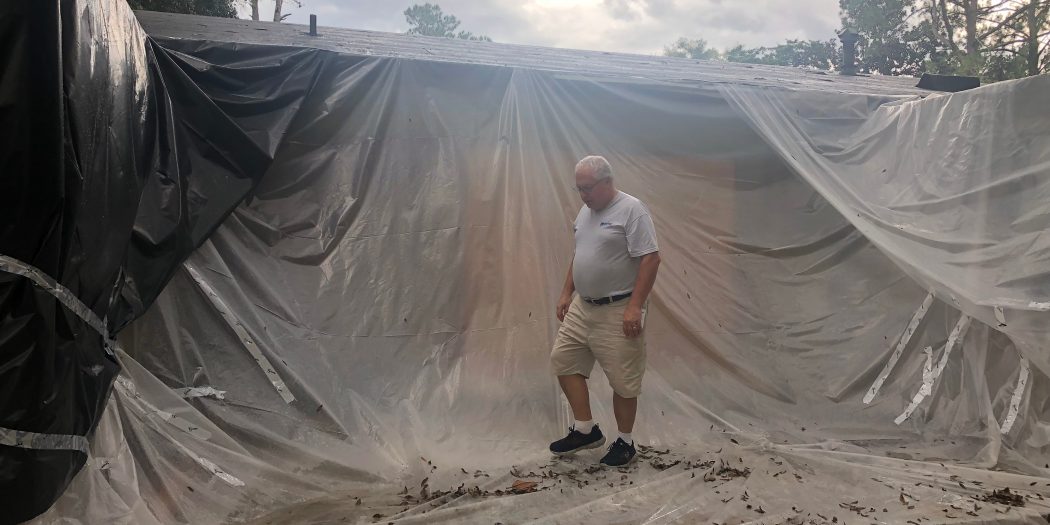 Scott Holowasko inspects the tarp that is keeping water from infiltrating his home for water after a recent storm. (Kacey Finch/WUFT News)

Hurricane Michael Is On The Radar, And Some In Gainesville Are Still Recovering From Irma

Scott Holowasko moved at the end of September for the second time in a year.

The first time, he, his wife, two sons and two dogs were forced from their home for three days by a 60-foot tree that had fallen across the back of it, sheering off the addition during the height of Hurricane Irma’s impact on Gainesville.

“It was unlivable,” the Gainesville Regional Utilities safety director recalled. “We had water standing in the house, and the addition was crushed.”

Today, the addition still isn’t rebuilt. The insurance company, contractors, weather and unforeseen foundational issues delayed the project by months. In a few weeks, however, the family will move out of their home again so that construction can take place in the main house, replacing the ceiling that was waterlogged from water intrusion.

“We just need to get the house rebuilt,” he said.

Since Irma hit Florida last year, its effects continue being felt by Gainesville — the residents, the city and the University of Florida are all still working with the Federal Emergency Management Agency and insurance companies. Citywide recovery efforts are ongoing. Preparations and changes are being implemented for the current hurricane season.

While the city as a whole has recovered well, there’s still some work to do, said David McIntire, district chief and emergency manager at Gainesville Fire Rescue. The city does not have a total cost of damages from the storm yet, but he estimated it at more than $1 million.

Creek basins around Gainesville, which caused flooding during the storm, suffered damage. The city is still working on ensuring the retaining walls are repaired.

McIntire said GFR experienced some communication issues with the public before and during the storm. Last year, the city added a Critical Event Management platform from a software company called Everbridge.

“Our program is called Alert GNV,” McIntire said, “and it allows us to communicate with anyone within the city who has opted into the program for any public safety messaging.”

Gainesville residents can opt-in to the program online or, if internet is not accessible, by calling McIntire at (352) 393-8465. Alert GNV, which was implemented on Aug. 1, allows the public to sign up for text alerts, such as weather and police activity.

Now, after facing three hurricanes in two years, the city is prepared for future storms more than ever, McIntire said.

“The more you work the system, the better the system is because you fine tune it,” he said, “and that’s what we’ve managed to do over the last two years — if not equally prepared, I think we are better prepared than last year.”

At the University of Florida, hurricane preparations also occur year-round.

“We constantly work to prepare,” said Kenneth Allen, UF’s director of emergency management. “Some things that we do consistently is making sure we are walking through each of our shelters every year, making sure the shelter supplies are in place and replenished from last year’s usage.”

Allen said Irma made the university realize the importance of individual preparedness, especially for students.

“It certainly caused us to look and make sure we’re stressing, more than ever, the need to have those emergency kits and to have three days’ worth of supplies,” he said. “We always stress to everyone to have a plan, get a kit and be informed.”

The university, like most of Gainesville, was affected heavily by flooding.

“Coming right off of the rainiest summer on record, it’s no surprise that Irma caused the flooding that it did,” said Jeff Huffman, director and chief meteorologist of Florida Storms and UF Weather Center.

The rain, which broke records from the 1800s, prior to Irma caused the ground to be more saturated than usual, leaving the storm’s heavy rainfall nowhere to drain.

So far, this hurricane season is looking “near or below average in terms of overall activity,” Huffman said.

As this hurricane season is a lingering thought, Scott Holowasko just wants Irma to finally be put behind him.

“By the end of the year,” he said, “we should be fully back in and back to whatever you call a normal life.”

Kacey is a reporter for WUFT News who can be reached by calling 352-392-6397 or emailing news@wuft.org.
Previous Oct. 9, 2018: Morning News in 90
Next Lessons Learned: Horseshoe Beach Residents Evacuate Ahead Of Hurricane Michael