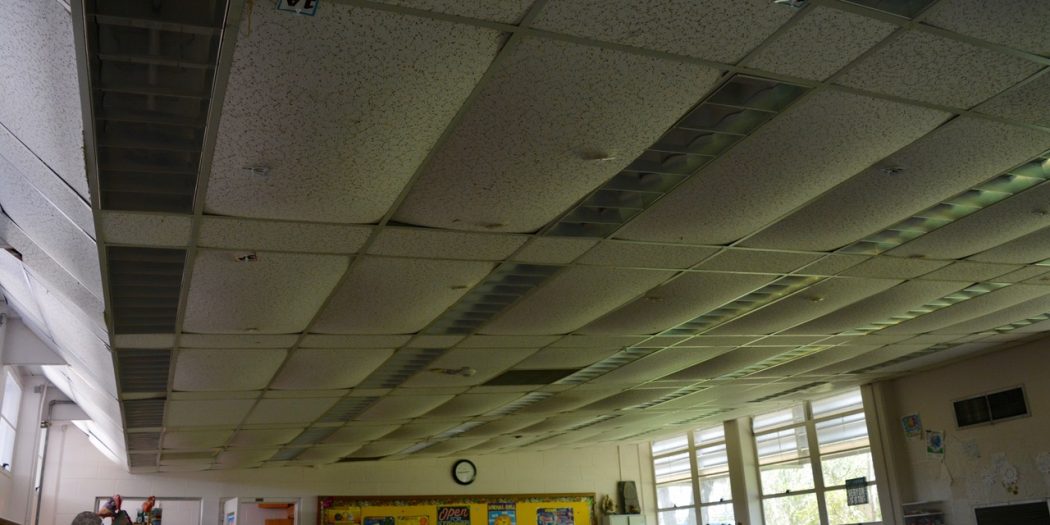 Humidity has affected the roof of a classroom in Howard W. Bishop Middle School, which also suffers from leaks and broken air conditioners. The school will receive renovations in 2020 from the Half-Cent Tax Initiative. (Christina Morales/WUFT News)

The half-cent sales tax will be a referendum on the ballot in November. The focus of the tax is to modernize and revitalize public schools around Alachua County. If it passes, it will produce about $22 million over the next 12 years starting in January.

Six of the seven commissioners were present for the meeting, and all gave their support for the proposal. Mayor Lauren Poe has previously stated his support for it but was absent from the meeting.

Johnson was concerned about the makeup of a committee overseeing how the $22 million would be spent.

“The piece of this that concerns me is that we have not talked about what that oversight committee… who’s on that, who’s choosing the people that are on that,” she said. “That’s a big question mark and ‘what if’ for me that sometimes can be a red flag when deciding how large pots of money are going to be spent.”

Alachua County School District spokeswoman Jackie Johnson assured her that the school board will be choosing who will be on the committee, but the district is looking to other organizations for help. She said the roles of the committee aren’t to choose the projects, but to oversee how the money will be spent and that the plan for each project is followed.

Gail Johnson is hoping the school board would consider including people from the communities that are affected the most by run-down schools. She stated that equity is important to her. Jackie Johnson said the committee will hold a workshop in the next couple of months.

“How are the priorities assessed?” Gail Johnson also asked.

“That is still to be determined,” Jackie Johnson said, stating the school board will be working with a private consultant to determine which schools receive priority. “Obviously the schools that are in the worst shape will get the first benefit.”

The school board is in the beginning stages of the bidding process for design work at Metcalfe Elementary School, Howard Bishop Middle School and Idylwild Elementary School. They are “probably going to need the most amount of work,” Jackie Johnson said.

Simmons also gave her support for the sales tax. But she made a correlation between the ages and conditions of some lower-grade schools.

“Will those schools be considered a priority?” she asked.

“Not based technically on their grade,” Jackie Johnson said. “It’ll just end up working out that way. But we didn’t intentionally go in and say, ‘OK, let’s do the F and D schools first.’”

If the facilities at lower-grade schools are so poor, Simmons said, she would hope the school board would make them a priority.

“Motivation is key,” Jackie Johnson said. “If they have a wonderful place to come to learn, that’s going to make all the difference.”