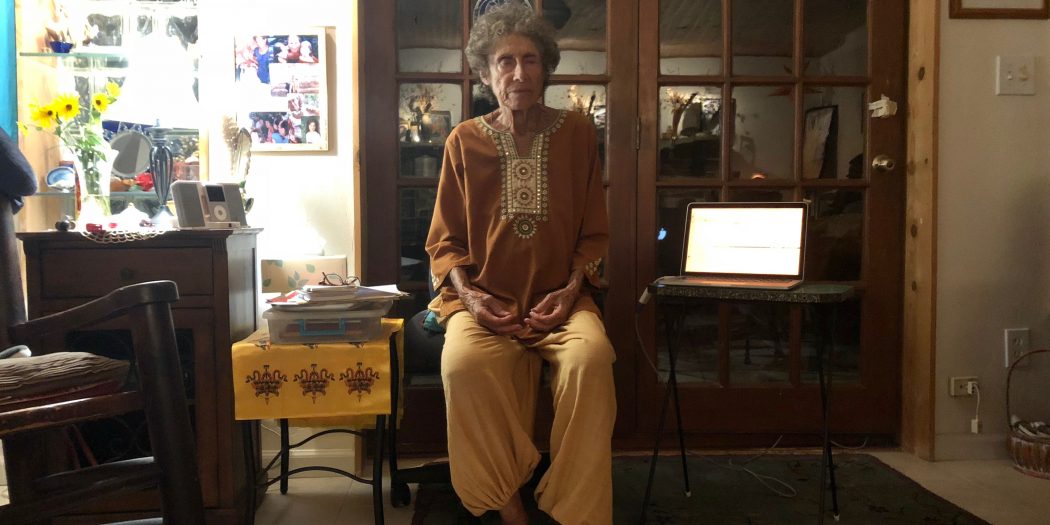 Harriet Meiss, 83, guides a meditation with a deep breathing technique during a recent session at her Gainesville home. (McKenna Beery/WUFT News)

Harriet Meiss doesn’t think about the loss she suffered in a bad investment in 2010. She had already learned to let go of her compulsions and trust more in the universe.

For 12 years, Meiss, 83, says she has helped thousands of people from across the world do the same. She holds meditation and blessing gatherings at her house in Gainesville twice a month.

Emily Snyder, 32, who works at a local health-and-wellness business, said after attending a recent 90-minute session at Meiss’ home: “I really enjoyed it. I definitely could feel a difference of having the hands put on me – it made me feel more at peace.”

A Boston native, Meiss earned a bachelor’s degree in biology from Brandeis University and a doctoral degree in medical science from Harvard University. She worked as a scientist in Italy for two years and before eventually becoming a professor at New York University.

In the 1970s, Meiss was still in a lot of pain from what she would only describe as childhood and other traumas, and wanted something lighter to focus on other than science. That’s when her life-changing spiritual pursuit began. Having moved to Gainesville in 2003 for a change of scenery, Meiss says she has also initiated 150 people to be blessing givers. She does not charge for the blessings, but participants may offer a donation should they choose.

What follows has been edited for length and clarity.

Q: What sparked your interest in the spiritual world?

A: I had friends involved, and the whole idea appealed to me because, at the time, I was working as a scientist and everything was concrete. I liked the fact that spirits were different. The energy was different – it was lighter. So I went to Spain, where I was introduced to the teachings from a book called “The Path of Self Transformation.” This led me to the spiritual world.

Q: Can you tell us more about your spiritual pursuit?

A: After I went to Spain, I became a spiritual counselor and teacher of spiritual concepts from the book. Next, I went to Australia in 1985 and learned many spiritual exercises, including breathing techniques. I was an international breathing trainer for 30 years. I have done a lot of teachings all over the world, in Brazil, Australia, Italy and all over the states. I went to India in 2005 to attend Oneness University. After a month there, I was initiated as a blessing giver. When I returned home to Gainesville, I became a trainer and then started initiating people here.

Q: Tell us more about the oneness blessing?

A: It is a way to transfer the benefits of traditional meditation, via subtle electrical energy or grace, without any effort required from the person receiving it. It has a neurobiological effect on the brain, which shifts us from a consciousness of separation and competition to one of oneness where we are all connected. The blessing is transferred in different ways. You can place your hands on someone’s head or energetically without physical contact.

Q: What is your spiritual name, what does it mean and how did you get it?

A: I was given the name Prana, which means life force, from the spiritual leader Mata Amritanandamayi in India. I put the rose part on myself when I was studying in Australia. I was very impressed with how big the roses were.

Q: What impact has your spiritual path had on you?

A: I think it opened my heart. I feel more loving, compassionate, gratitude and blessed. My spiritual journey has helped me stay as healthy as I am and live as long as I have. It has relaxed me and made my life more peaceful with less stress.

Q: Why do you want to bless people?

A: I want to pass on love and gratitude to everybody I can. The whole idea of the blessing is to create a golden age – an age of peace where people are not fighting each other. I wanted to contribute to that. I know I have had an impact on people. What I do is nurture people along the spiritual way of being. I listen as a counselor and as a friend.

McKenna is a reporter for WUFT News who can be reached by calling 352-392-6397 or emailing news@wuft.org.
Previous Florida Stuns No. 5 Ranked LSU At Home, Defeating The Tigers 27-19
Next Levy County Prepares For Tropical Storm Michael’s Landfall