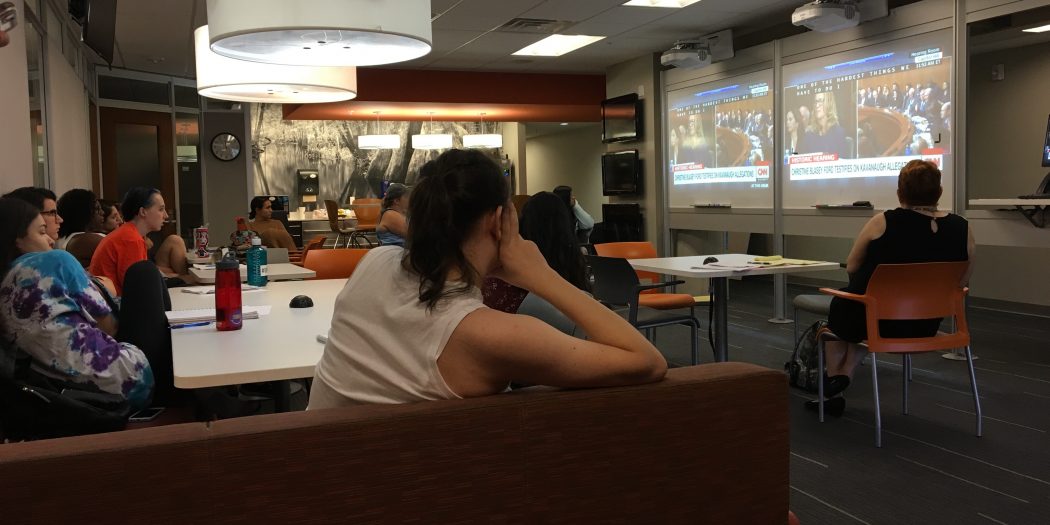 Professor Mary Ann Ferguson’s public relations, ethics and professional responsibility class watches the Kavanaugh hearing. “I think it easier for people to relate to things that are very current and that are being discussed,” Ferguson said. "It is one thing to talk about something that happened 10 years ago or longer, but these are young people and they react to much better to things they can see and hear.” (Angel Kennedy/WUFT News)

President Donald Trump has twice in recent days warned young men that their futures are at stake because of how his Supreme Court nominee’s confirmation became imperiled.

This week, the president doubled down on that assertion. “It is a very scary time for young men in America when you can be guilty of something that you may not be guilty of,” he said.

What do college students in Gainesville think of his warnings and Judge Brett Kavanaugh’s confirmation battle, which could reach a climatic conclusion in the U.S. Senate this weekend?

Turns out that many are not all that worried. Recent interviews with nearly two dozen students at the University of Florida and Santa Fe College found that about half agreed with Trump’s assessment. But half also said the statements and historic hearing involving Kavanaugh and professor Christine Blasey Ford aren’t personally consequential to them.

Ricky Campbell, 21, an engineering major at Santa Fe, said that because he doesn’t drink alcohol or hasn’t sexually assaulted anyone, the confirmation battle doesn’t affect him. Campbell also said that he has not witnessed any related behavioral change among his friends.

“I’m not in the realm of people it would affect,” he said.

Ruthanne DeGrange, 19, a UF public relations major, said she couldn’t take her eyes off the TV screen for the four hours the hearing was shown in her American history lecture and lab.

“Anyone who is a human being should take away from the hearing that your actions, no matter how old you are, matter,” she said. “Also, that sexual abuse is never OK, no matter who it is.”

Kathleen Conow, 21, a Santa Fe political science major, said she doesn’t feel safer knowing sexual misconduct is in the spotlight because of Kavanaugh. If the hearing changed any such behavior of men toward women, it would be more hidden and strategic, Conow said.

“It persuades them to be sneakier … to do things behind closed doors,” she said.

Dorothy Espelage, a psychology professor at UF who has written scores of articles and five books on bullying, sexual harassment and dating violence, said dismissive attitudes about sexual misconduct among college students is not surprising.

“We have a generation of college students that are not aware that they have experienced, or have done sexual harassment, because they haven’t been taught about it,” Espelage said.

Shayna Grife, 19, a UF political science major, said college students are more cautious and watching their actions because of Kavanaugh, the #MeToo movement and Trump’s comments.

“It is opening the door (for victims) to report actual sexual assault,” Grife said.

Libby Shaw, 20, a public relations major and director for Sister Support Ambassadors at UF, said Trump’s comments are setting back progress made because of #MeToo.

“Can you imagine if you were a sexual assault victim and the president of the country you lived in was basically saying you are lying?” Shaw asked. “It just blows my mind.”

She added that not all young men will be swayed by Trump’s comments.

“I think some men are going to think, ‘Oh! Wow! Look at all these women lying,’ and some men might have some understanding of how hard it is for women in these trials,” Shaw said.

Jay Curry, 24, a media productions major at Santa Fe and a member of My Brother’s Keeper, said the confirmation battle is making a difference among young men.

“Any time we see a situation where we can say honestly that there is some type of (potential) sexual assault or misconduct toward another,” Curry said, “we always say, ‘Hey man, you might want to check yourself – and take a step back and look at the situation from another standpoint.’”

Alejandro Pena, the Santa Fe student body president, said the hearing should help cause students – male or female – to focus more on the long-term affects of what they do now.

“Our generation is now understanding that anything you do has a permanent record and you have to watch out with that,” he said.

Devoun is a reporter for WUFT News who can be reached by calling 352-392-6397 or emailing news@wuft.org.
Previous Oct. 4, 2018: Afternoon News In 90
Next Watch Live:Senate Cloture Vote On Kavanaugh

Only 10% of student athletes living with mental health issues seek professional help, according to Athletes for Hope.