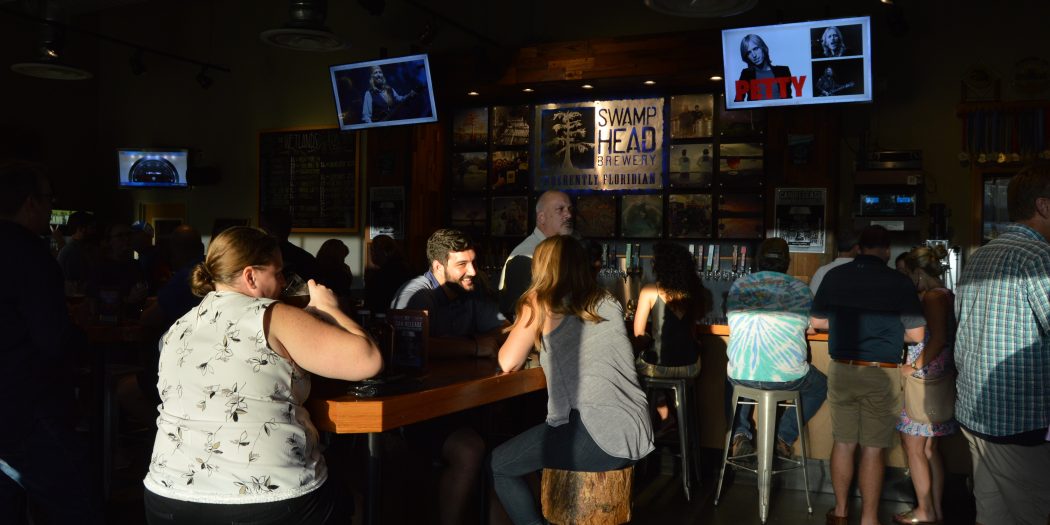 Fans gather at Swamp Head Brewery on Thursday night to enjoy a craft beer and the unheard tracks on “An American Treasure” released on Friday. (Karina Elwood/WUFT News)

Hours before the release of Tom Petty’s box set “An American Treasure,” Mark Ingram’s eyes watered Thursday as he reflected on the music legend at an official listening party in Gainesville.

“What a rock ‘n’ roll way to go,” said Ingram, who started a Petty tribute band in Vancouver, Canada, and who came to the listening party from a Microsoft business conference in Orlando.

“He had just finished his 40th anniversary tour,” Ingram said of Petty, the Gainesville native who died Oct. 2 in Los Angeles a week after he and The Heartbreakers had come off the road.

Tom Petty Nation, which bills itself as having the biggest fan group on Facebook with more than 32,000 members, hosted the listening party at Swamp Head Brewery on Southwest 42nd Avenue. It was one of 30 across the world designed to give fans a preview of the new music.

The Thomas Earl Petty Family Trust reached out to Tom Petty Nation two weeks ago for help hosting the listening parties, said Donna Quinn, 60, of The Villages in Sumter County, a devoted nation member and an organizer of the event.

“The true fans were here,” Quinn said. “If they weren’t a fan, they respected the fans.”

Meri Nantz, 55, of Gainesville, and a research administrator at the University of Florida Department of Food Science and Human Nutrition, remembers dancing to Petty’s “Refugee” on repeat with her best friend in high school. Nantz said she was devastated after Petty’s death, but believes that the 60-track “An American Treasure” will help give her a sense of closure.

Petty’s new song “Gainesville,” which was released on Sept. 20, was a hit at the listening party.

“It feels like it will become an anthem for all the college students and and residents to remember their time here,” Nantz said. Borrowing from the song’s refrain, she added, “It is a big time for them.”

Frank Prince, 22, a student at the University of Florida who hails from Cocoa in Brevard County, said “Gainesville” changed his perspective of how Petty viewed his hometown.

“I thought he was always trying to get out of Gainesville and go west,” Prince said. “He sang about youthful escape. He wanted to escape.”

Swamp Head will release a Petty inspired beer named “Among the Wildflowers” on Oct. 16, just before what would have been his 68th birthday. Gainesville plans to continue the celebration that weekend with two concerts and renaming Northeast Park in Petty’s honor.

Fans of Petty in Gainesville also on Thursday attended a presentation by Warren Zanes, author of “Petty: The Biography,” at a “Great Storytellers” event at UF.

Zanes was interviewed by Clay Calvert, a professor at the College of Journalism and Communications, who this semester is teaching a honors class focused on the book.

Calling Petty a rare legacy artist whose work spans across generations, Zanes, who was once a member of a band that opened for Petty at concerts, spoke about how Gainesville played a big role in the rocker’s development as a musician.

Recalling a conversation the two had in Beverly Hills, California, Zanes quoted Petty as saying: “This isn’t where bands start. You’ve got to go home.”

Karina is a reporter for WUFT News who can be reached by calling 352-392-6397 or emailing news@wuft.org.
Previous Sept.27, 2018: Afternoon News In 90
Next The Funding For Florida Universities’ Projects Is Under Scrutiny