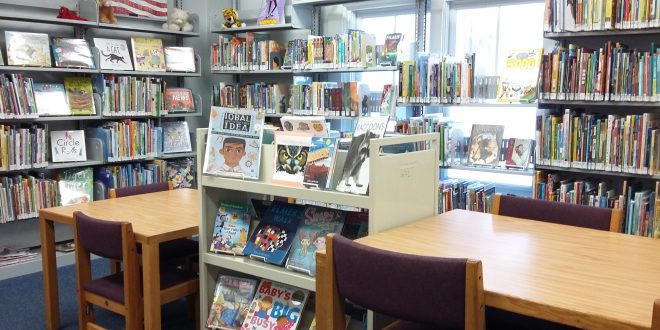 The Waldo Branch Library is relocating from Cole Street to NE U.S. Highway 301, growing five times its current size and adding about 3,000 books to its collection.The reading and activities area at the current Waldo Branch Library location has seven chairs and does not separate children, teens and adults. The new location will have different rooms for different needs. (Sarah Stanley/WUFT News)

The Waldo Branch Library will soon be an old Dollar General.

In 2014, the building that will house the branch was bought for $325,000. For four years the Alachua County Library District has used the building located at 15150 NE U.S. Highway 301 for storage. However, before they could start on the renovation of the Waldo Library,  the district had to finish two other capital projects for two other libraries — renovations to the Tower Road Branch in February and the Library Partnership, which was relocated to 912 NE 16 Ave., in August.

“Now we’re in the mode for doing [construction on the Waldo Library],” said Nickie Kortus, spokeswoman for the ACLD.

District officials are looking to open their doors in the Spring of 2019. Even after it opens, 3,000 of the 8,100 square feet will still be used for storage. The library will be five times the size of the current location.

“If you’ve been in the current Waldo [library], it’s like being in someone’s living room,” Kortus said.

The new library will come with all of the modern amenities. There will be more computers and a wider book selection. According to Kortus, the library’s book collection was 5,525 at the end of 2017. It increased to 7,434 so far this year and will increase to over 10,000 after the branch opens.

The number of computers will increase from four to 19 and have faster internet.

“Most everyone in the community is excited for the new library,” said Lisa Hill, 53, a life-long resident and Waldo Summer Camp director. “Whether we have the small one or the big one, [as] long the library is in Waldo, I’m still happy. I’m not frustrated because they haven’t opened yet because I think the library is still doing a wonderful job here in Waldo.”

The library will have dedicated teen and children spaces, a quiet reading room, two study rooms, a community meeting room and an art exhibit area. A survey of Waldo patrons showed they wanted more arts and crafts programs — followed by an increased calendar of educational activities.

“It was exciting, especially when we saw those numbers for arts and crafts knowing that we were going to have the art Makerspace,” said Kerry Dowd, Waldo Library branch manager. “So that was reaffirming.”

The Makerspace will provide an area for community members and librarians too pool knowledge and equipment, such as sewing kits or 3D printers, and learn to create art through different mediums.

“We’ll be able to hopefully tap into our community,” Dowd said. “There are a number of artists that are our patrons, and we’ll be able to offer different types of crafts where we have a separate room where we can be messy.”

Right now, due to lack of space, the library is forced to hold programs at the community center down the road, which has stretched the four library employees. They just find it a little difficult to monitor two places at once, and it limits the number of programs they can have.

The building on Cole Street, which was rented from the city, will be returned once it closes. Although they are leaving what Dowd described as a quaint atmosphere behind, she said that the new library will better serve the Waldo community and surrounding rural areas.

“I think people really appreciate the charming characteristics of the current library. It’s nestled next door with the historical church and the huge live oaks,” Dowd said. “But they — I think overall — are really excited to have all the opportunities that a larger building will offer.”

Sarah is a reporter for WUFT News who can be reached by calling 352-392-6397 or emailing news@wuft.org.
@stansarahley
Previous How A Land Trust Might Help Gainesville’s Worsening Affordable Housing Problem
Next Law Enforcement Personnel Stand In for Fathers on “Dads Bring Your Child to School Day”