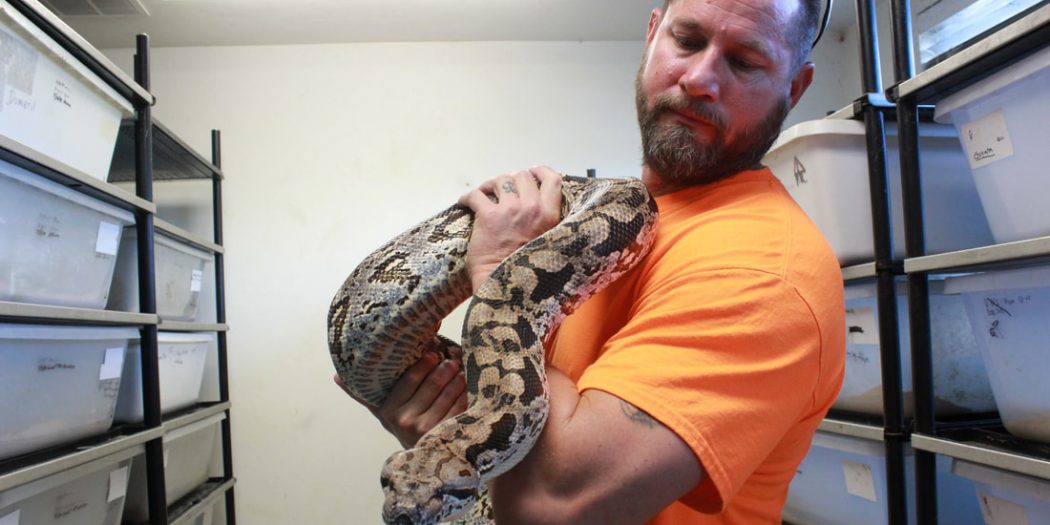 Mike Layman has had a passion for snakes since he was a kid growing up in south Florida. He said Newberry has welcomed and accommodated his business in any way possible. (Angela DiMichele/WUFT News)

Mike Layman is not afraid of being bitten by snakes. He’d rather be bitten than pooped on.

Both of these things, though, are everyday occurrences when you’re the owner of the biggest reptile farm in the world. His four warehouses, totaling 50,000 square feet, are better known as The Gourmet Rodent, in Newberry, Florida.

The Gourmet Rodent is home to 75,000 animals ranging from ball pythons and corn snakes to arachnids, frozen mice and scorpions. Layman’s business is the supplier for all 1,500 national Petco stores and sells to Disney’s Animal Kingdom park and the Central Florida Zoo in Sanford.

Newberry, Layman said, has accommodated his business any way possible, as long as he wasn’t attempting to build the reptile farm next to restaurants in the middle of downtown.

“We allow them to show that (Newberry) really does think outside of the box, and we really do want to have a diverse economy in the city of Newberry,” Layman said. “The officials understand that if your entire infrastructure is built around agriculture, and the farming industry takes a hit, so does your economy.”

Newberry’s pro-business and economic development program is what allows for Layman’s bustling business, he said. With 60 full-time employees and a weekly payroll of about $27,000, The Gourmet Rodent is a multimillion dollar business and the largest continual, non-seasonal employer in the city, Layman said.

“They came to Newberry, and they were looking for a new home. The city sat down with them and analyzed their process and discovered that really they didn’t really belong in an agricultural setting,” Thomas said. “They belonged in more of an industrial type setting. Working through that with them, we made some accommodations in our zoning.”

As a result of the zoning accommodations, Layman said he bought the warehouses at 25275 NW 8 Pl. and expanded to operate the business without conflict. The Gourmet Rodent fulfills 60,000 overnight shipments annually across the United States, Europe and Asia, Thomas said.

“The name Gourmet Rodent originated from the fact that the founder just loves reptiles, and he was spending so much money feeding his own reptiles that he realized he could actually turn that into a profitable business,” Thomas said.

Four separate colubrid snake colonies are currently being bred to either be pets or to be kept at The Gourmet Rodent, Layman said. Breeding the “right boys with the right girls” elicits a variety of colors and patterns in the diverse litters of the soon-to-be “designer snake” pets.

Layman, 45, bought The Gourmet Rodent in 2014 from previous owners Bill and Marcia Grant when he moved from South Florida in 2001 after his father became ill with Parkinson’s disease. He said he learned how to turn his childhood passion for snakes into a lucrative, fun career.

“They just always seemed like the perfect predator to me. They’re stealthy and sleek, and everything about them is just fascinating to me,” Layman said. “Reptiles have been really good to me. I live a very comfortable lifestyle thanks to reptiles and the pet trade.”

In terms of government regulation, the Florida Fish and Wildlife Conservation Commission inspects captive wildlife facilities like his once a year, and the agency said the last three years’ inspections have found it to be a clean operation.

The Gourmet Rodent is unusual in the reptile breeding industry because no other competitor produces as many clutches of eggs as this business, Layman said. About 2,500 clutches of ball python eggs were laid at the warehouses since January 2018, while competitors produced about 1,500.

Layman expects another 200 clutches of eggs to be laid by the end of 2018. Each clutch, or group, can range anywhere from five to 20 eggs, he said.

“We’re actually the only industry where every time I make a sale, I make a competitor,” he said. “It just goes hand and hand with the hobby. People are always coming into the hobby.”

The city of Newberry is open to different, unusual kinds of farming and agriculture, Layman said. The Gourmet Rodent is proof of a thriving, small business within the city.

Layman’s is no cookie-cutter business. In fact, he said The Gourmet Rodent is one of three breeding companies in the country that are zoned and permitted by the municipality they live in.

“We, probably more than anybody else, show if you’re a viable business that’s not necessarily a cookie-cutter business, you may have a home out here in Newberry,” Layman said.

Angela is a reporter for WUFT News who can be reached by calling 352-392-6397 or emailing news@wuft.org.
Previous Sep. 26, 2018: Morning News In 90
Next Alachua County’s Flood Management Ranking Improved, But This Northeast Neighborhood Still Suffers