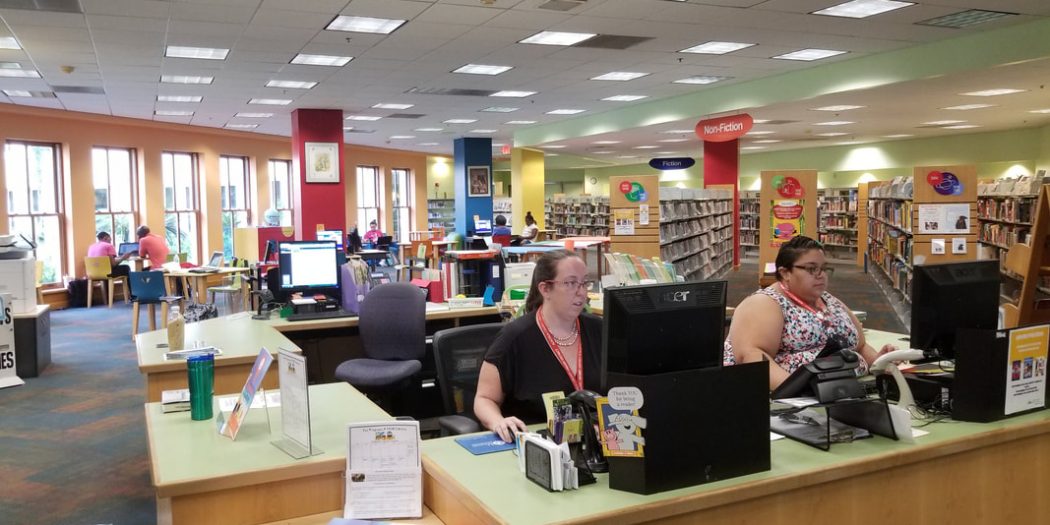 Erin Phemester, to the left, works the front desk of the children's section at the Headquarters Branch library in Gainesville. (Brittany Wallace/WUFT News)

Are Library Cards The Answer To A Level Playing Field For Alachua County Students?

Erin Phemester was tired of seeing public school students eager to use library resources but forced to leave with nothing because they lacked a library card.

In May, Phemester, the senior library manager with the youth service department at the Alachua County Library District, presented an idea to her colleagues: Offer all 27,000 public school students free library cards at the beginning of every school year.

“The Governing Board district here at the library was very pleased to see we are trying to find ways to reach those students,” Phemester said, adding that there are a variety of reasons that preclude them from getting a library card, including mom and dad’s work schedule. But by offering them library cards at the start of the school year, “they can still access our services.”

Meghan Bonnaghan, supervisor of media and instructional materials at Alachua County Public Schools, learned of the idea and brought it to the school board, which gave the green light. Their goal was to get library cards in the hands of every public school student from kindergarten to grade 12 by the end of September for National Library Card Sign-up Month, but now say October.

Gretchen Greene goes to the Newberry branch library with her two daughters Gracie and Layla multiple times a week. She lacks internet access at home and can only use hot spots with her phone. Though Greene does have a library card, she is happy to hear about the partnership between the schools and the libraries this year.

“It would be hard if we didn’t have access to the library,” Greene said, recalling a recent time when one of her daughters need library resources to complete a school assignment.

“Layla had to do a research project on Carl Sagan,” Greene said, referring to the famous American astronomer and astrophysicist, “and she had to come here. It is essential.”

Many residents don’t have internet access at home and need the library to go online. In Alachua County, 22.3 percent of the population is poverty-level, according to the U.S. Census Bureau. Poverty is one of the main reasons that people can’t afford a computer or to purchase every book their child needs for class.

Also, 45,000 people in Alachua County don’t have 25 megabytes per second of internet speed. This is the minimum speed needed in the FCC standard for broadband internet, according to Broadband Now, an organization that works to close the digital divide; the divide is between people who have computers and internet access and those who don’t.

Bonnaghan said that the school board has been working on equity and access for students. She understands that the library has more resources than a school library, and she wants students to have access to that.

There are other benefits of having a library card as well, like gaining access to all the libraries’ physical and digital books. Also students can access tutor.com and interact online with a real person who will answer their questions.

“A library card really is the best back to school resource in your backpack,” Phemester said.

Corrections appended: A previous version of this story stated there was a two-hour limit for people using library computers without a library card, which is not the case.

Previous A Q&A With The Van-Loading Man Named Sandy From Tom Petty’s New Song ‘Gainesville’
Next Sep. 26, 2018: Morning News In 90