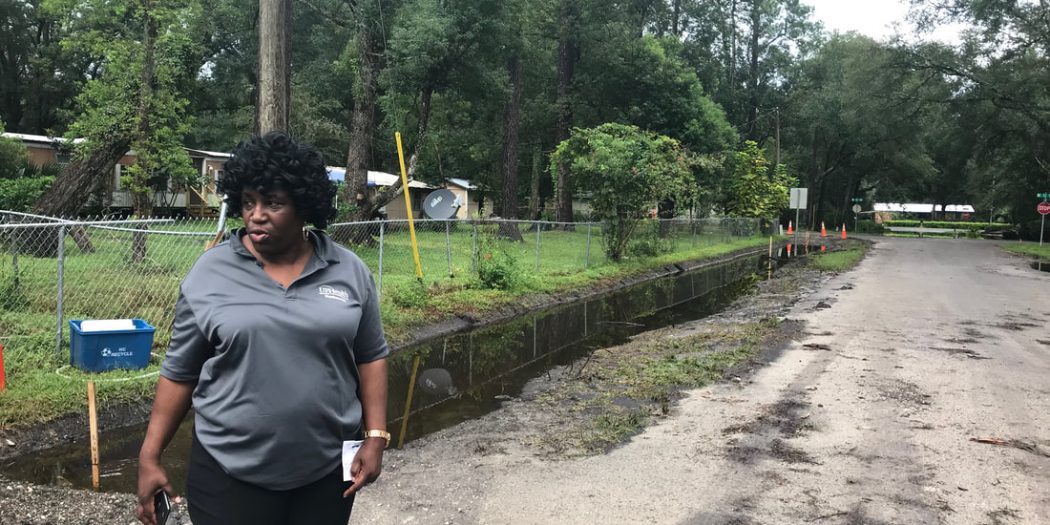 Rosalind Greene explains how her friend, son and hired workers helped dig a trench in front of her home to deter the water away from her yard. (Marianna Faiello/WUFT News)

By Marianna Faiello and Brittany Wallace

When Rosalind Greene pulled up to her single-family home in August — after living with her family at a Holiday Inn Express off Interstate 75 twice in one year — what she saw left her speechless.

The yellow-and-teal cinder-block building off Waldo Road, where Greene has lived for about 30 years, was trapped by water as if it were its own little island surrounded by a moat.

Ever since Hurricane Irma stuck last year, Greene a scheduling clerk at the University of Florida Health Shands Hospital, has been living in and out of her home.

This flood, however, had nothing to do with the Category 4 hurricane.

An abundance of rainfall this summer brought severe flooding in Greene’s Northeast Gainesville neighborhood. Since May, the rainfall has been higher than the normal average, according to the National Weather Service.

It’s why Alachua County Engineer and Public Works Director Ramon Gavarrete hopes for drier days ahead. Gavarrete has been working with Greene to help solve her flooding issues. But even so, it’s been a difficult task. The ground is overly saturated, and it’s hard for the soil to absorb the rain.

The first time Greene and her family were displaced, it wasn’t until about 45 days after the hurricane that she was first allowed back to assess the damage.

“I was completely devastated,” she said.

Greene said it took Alachua County a year before answering her pleas for help. It wasn’t until September when county workers installed culverts, large cylindrical drains, in her front yard.

A hope for federal aid

According to the Federal Emergency Management Agency (FEMA), the average wait time for an inspection following Hurricane Irma was 27 days. At least 967,163 inspections were requested as of the end of November.

FEMA reported that more than 2.6 million Florida homeowners had contacted the agency for individual assistance help by November. Floridians had also received more than $1.5 billion in funding. Of that amount, more than $899 million had gone to homeowners or renters whose insurance did not meet their disaster-caused needs, FEMA reported.

Greene said it cost her thousands of dollars to repair the interior of her home, which included: renovating the only bathroom after her septic tank overflowed, cutting out the bottom 4 feet of drywall and all of the baseboards throughout her house, taking up the carpet and cleaning everything inside after mold and mildew had set in.

Greenemoved into the Holiday Inn Express for the second time at the end of August, when the lush green grass that previously flourished in her yard had become waterlogged, as if someone left her yard hose faucet on and forgot to turn it off for weeks.

Where once stood a beige, wooden-paneled playhouse in Judy Nance’s yard, there was an empty plot with nothing but dirt and water.

“I’m beginning to think we’ve gone to hell and don’t even know about it,” said Nance, 71.

Nance relies on her red CTM mobility scooter to get around. She said that she became stuck indoors when her driveway became immersed in water.

It’s was flooded so bad that her 15-year-old Yorkie, Duke, and 2-year-old poodle, Duchess, had to do their business in the shed connected to her home.

James Waldo, a retiree, has lived in the area for about 54 years. In all his time living in Northeast Gainesville, Waldo couldn’t recall a time when flooding had been so bad.

Although the 75-year-old man’s home sits atop a layer of cinderblocks to keep it above ground-level, the water flooded his front yard as well. He resorted to wearing black knee-high rain boots to slosh about and said the water rose as high as one-and-a-half feet.

Greene said that by the end of August, she had finally had enough waiting around for the county to help her.

She resorted to hiring homeless people to dig ditches in front of her house, which neighbors did not like. This caused a verbal altercation, and the police were called. The authorities alerted the county, and that same day, help arrived.

That was when the county finally installed culverts into the ground in front of Greene’s house to prevent future flooding. A few of Greene’s neighbors received culverts in their yards, too.

With the new additions, Gavarrete said the road maintenance crews can resume their normal duties and not struggle trying to complete road jobs as well as emergencies like Green’s.

Before county crews got to work on Greene’s property, Gavarette said, the water was within an inch of her home. By helping to excavate some of the surrounding dirt and digging a trench in front of Greene’s home and down her street, the water started to move away and out of the area.

Gavarette said the county is trying to prepare for the potential storms that could result in a lot of flooding by having portable water pumps at the ready.

The county engineer said the county spent around $100,000 for three new pumps, which are currently delayed because of vendor issues, and an additional $6,000 rental fee per month for two pumps to hold over until the new pumps come in.

Gavarette said the county is expecting the new pumps to arrive by November, toward the end of hurricane season.

“I pray we don’t get hit,” he said. “We definitely need a few weeks of dry and sunny weather.”

For its efforts, the county was recently honored for improving its flooding standings with the County Rating System (CRS). The CRS is a voluntary incentive program that promotes exceeding floodplain management regulations set by the National Flood Insurance Polices (NFIP).

Benefit of the doubt, but residents expect more

FEMA recognized Alachua County’s government earlier this month and presented it with a plaque for improving its CRS from a Class 6 to a Class 5 rating. The best rating is Class 1 and the worst is Class 10.

Now that Alachua has been rated Class 5, the 492 residents with required flood insurance will receive more of an insurance discount — from 20 percent to 25 percent.

FEMA’s website says the focus of the NFIP is to reduce the impact of flooding on private and public structures. It provides affordable insurance for property owners and encourages communities to adopt their floodplain regulations. The CRS has to exceed these NFIP regulations to move up a class.

Alachua County exceeded the NFIP requirements by raising houses off the ground by 3 feet in Flood Zone A areas instead of the 2 feet that is required, said Lalit Lalwani, the county’s CRS coordinator and floodplain administrator.

Lalwani was the person who accepted the plaque from FEMA.

“I feel very proud of it,” said Lalwani, who accepted the plaque for the county.

The Alachua CRS, formed in the 1990s, has the highest CRS rating than any of its surrounding counties. Levy, for example, is a Class 9, according the October 2016 NFIP Flood Insurance Manual. Lalwani mentioned that newer developments did better during Irma than older ones built under different regulations.

The next CRS rating evaluation is in 2019, and Lalwani is not sure what ranking the county will get. He hopes to maintain the rating they have now. He said they do not have the necessary resources and doubts they’ll move up to Class 4 next year.

When Greene heard that about the plaque, she had to think long and hard about whether the honor was deserved.

“I feel like they are trying,” Greene said, “but they need to do a lot more.”

Nance, Greene’s neighbor, said she is disappointed in how the county handled the flooding in her community.

“We, as a community, are a very patient community,” Nance said. “But we haven’t had dried land here since Irma hit.”

Marianna is a reporter for WUFT News who can be reached by calling 352-392-6397 or emailing news@wuft.org.
Previous Gourmet Rodent Breeds Global Exotic Pet Business In Newberry
Next What Should People In Northern Florida Cities Like Gainesville Know About Red Tide?