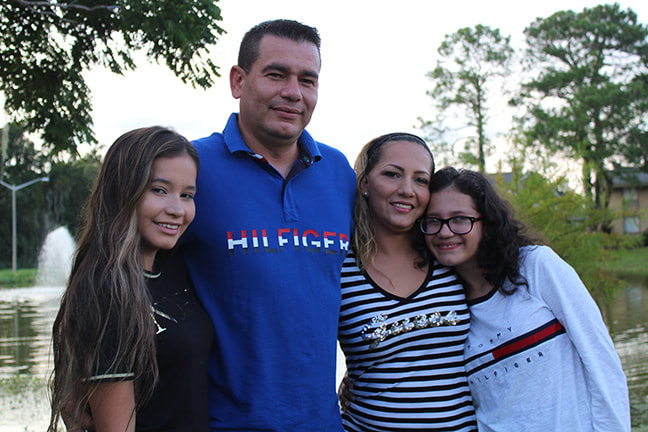 Juan Galvis, 43, stands in front of the fountain at his apartment complex Wednesday evening. He and his family, Karen (left), Maria (right) and wife Doly moved to Gainesville from Colombia in 2016. (Angela DiMichele, WUFT News)

Among the white and brown hard hats on the Northwest 18th Street and 2nd Avenue construction site in Gainesville, one sticks out.

The American flag hard hat with a perched eagle emblazoned across the top belongs to Juan Andres Galvis Ortiz.

In 2016, Galvis, 43, earned $500 a week working as a laborer at The Standard apartment complex on West University Avenue in Gainesville where he picked up trash until 4:30 p.m. five days a week. Since starting his own construction company, Jago 777 Drywall & Framing Inc., on April 10, he said he now makes $6,000 a week.

Galvis employs 37 construction workers in total across three jobs in North Central Florida in Gainesville, Ocala and Keystone Heights. He said his first project, a seven-story apartment complex in Midtown, will be complete by fall 2019.

“I took out a credit card, and that’s how I was able to pay the insurance for the company and workers’ compensation and disability,” Galvis said. “I got all my paperwork done, and now here I am.”

He will hire at least 30 new employees to complete the interior walls of the complex. Part of the St. Augustine Catholic Church will move into the building’s ground floor, Galvis said.

Galvis never worked in construction while living in Colombia, he said. He was a military captain in the army where he fought the rebel guerillas, The Revolutionary Armed Forces of Colombia (FARC), for 14 years until he retired in 2005.

After retiring, he opened Black Gold in Colombia, a store that produced and sold hair products and shampoos for women. But when his youngest of two daughters, Maria Galvis, became deathly ill at 10 years old with Lupus, a disease that causes the body’s immune system to attack itself, he sold the shop.

“Due to my daughter’s sickness I had to get rid of everything,” he said. “Get rid of my company, sell everything. I was practically ruined.”

“The doctors would say, ‘No, she’s probably not going to live,’” he said. “They would tell me she could die today or tomorrow.”

On Sep. 20, 2015 at 8 a.m., doctors pronounced Maria dead after suffering from cardiac arrest. But after more than 40 minutes later, she started breathing again, he said.

“You see her and she looks normal. She jumps and leaps,” he said. “That girl is attached to me completely. She’ll cry if I’m not there.”

When Galvis and Maria returned from China to Colombia, he appeared on TV because of Maria’s sickness. It garnered media attention because her Lupus fully developed in one month when it normally takes four years, he said.

After appearing on TV, he said FARC members who were tracking him since 2005 were able to find him. Because Galvis fought against the FARC in the military, he was one of their main enemies.

His oldest of two daughters, Karen Galvis, 15, said she and Maria often felt scared to go to school in Colombia because they were followed by Farc members. She is in 10th grade and Maria is in 9th at Gainesville High School.

“My parents were always so protective with us,” Karen said. “We couldn’t go to the school like five days a week every week. That’s why we came here.”

Once he arrived in Gainesville for Maria’s treatment at UF Health Shands Hospital on June 28, 2016, Galvis called his family in Colombia and learned that the FARC raided their home.  If he and his family hadn’t come that day, he said they wouldn’t be alive.

“Since I had been in the military, the guerillas had a price on my head,” he said. “They went into my house, destroyed my house and knocked the door in, attempting to murder me.”

Galvis was then forced to stay in Gainesville. He said his family told him they couldn’t come back.

Now in a foreign country with no money, job or house, Galvis said he started working at The Standard when he saw superintendent Pedro Hugo Lopez at the building and asked for work.

Every day, he said he walked an hour and a half to and from work to provide for Maria,13, Karen and his wife, Doly Pinzon, 35. He said he remembers staying at the job site until no one else was there because he didn’t know what time the workday ended.

Galvis moved up from his laborer position by learning how to frame buildings and do small repairs. He then used that experience to work as a framer at other jobs in Gainesville, he said.

Three local general contractors have offered him jobs once his current one is finished. The first one begins in February, he said.

“Various companies have seen my work now and see that it is good, and they are sending me blueprints and various projects,” he said. “They’re all telling me to come and work with them.”

Though he said a typical day in his job is stressful managing three crews, their equipment and safety, keeping his family healthy inspires him to do high-quality work and continually improve. He sees his job as an opportunity rather than a way to pay bills, he said.

“The majority of people don’t think they can create their own company and get out ahead,” Galvis said. “They think, ‘I’ll simply work Monday through Saturday, make my money, spend this on a car payment, pay this, pay that. But they dont project themselves toward the future. They don’t dream.”

“You have to dream.”