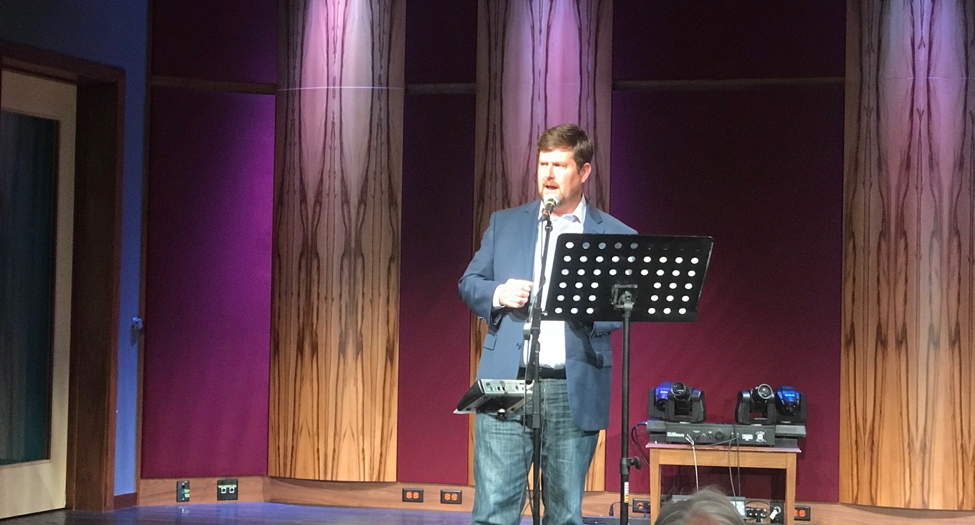 Mayor Lauren Poe address the crowd on why the schools need funding. “We cannot be a successful city, a world class city…unless we have a platinum school system, and that starts with having the best school facilities in the entire state.” (Devoun Cetoute/WUFT News)

It was standing room only at the Half-Cent for Alachua Schools campaign kickoff at the Heartwood Soundstage Thursday night.

Ninety or so people came out to show their support for the Citizens for Strong Schools event. Among them were parents, principals, school board members, commissioners, mayors, business leaders and school advocates.

“We have got to fund our schools,” Mayor Lauren Poe said. “We got to provide schools that all of our children are able to learn in and don’t have leaky roofs or science wings that don’t work because that is what creates a thriving community for the next generation.”

The campaign is for a ballot initiative that will impose a half-cent sales tax increase, which would raise the county’s current rate of 6.5 percent to 7 percent, which is the rate in surrounding counties. If approved, it would last 12 years and bring in about $22 million per year to schools, according to the Alachua County Public Schools proposed project list.

During the event, Poe spoke to the audience about his history in education and why the schools need the funding. Gib Coerper, mayor of Alachua, sent a statement to be read and Matthew Surrency, mayor of Hawthorne, spoke about how the initiative affects his city too.

Michael Gamble, principal of Howard W. Bishop middle school, and Lilliemarie Gore, county teacher of the year, were the next speakers and described how bad the situation is from a first-hand experience.

“We have students eating lunch at breakfast time. Our computer lab right now is closed due to an overgrowth of mold directly in the ceiling,” Gore said. “Lastly, the portable situation at Idylwild is unlike anything I have ever seen in my entire 15 years of teaching.”

Attendees also picked up a lawn sign, a shirt for sale, the ACPS project list or fliers describing the initiative. They were also given the option to donate. Those who did raised $1,960. Online donations will stay open till next Sunday and the final amount will be matched by the Alachua County Council of the Parent Teacher Association.

In the past decade, the state legislature has cut funding from Alachua County school facilities by about $170 million, according to the campaign’s website. This has left schools in disrepair, unsafe and unable to provide the education students need.

“Our facilities are in crisis,” district superintendent Karen Clarke said. “We got make sure that our buildings are able to support the learning that we are expecting out of our children.”

Kathleen Valdes, principal of J.J. Finley elementary school, has over 600 students in a school that was built in 1939. They need renovations to 26 classrooms and the auditorium, security improvements and to construct 16 new classrooms.

“The classrooms and buildings have never been renovated because we don’t have the money to do so,” she said.

Daniel Burney, principal of Westwood middle school, has over 900 students in a school that was built in 1958. They need security improvements, renovation to six classrooms and construction of 55 classrooms and a new media center building.

“This is a disservice. If we truly believe, as a community, that children deserve the best we need to put our money where our mouth is,” he said.

Devoun is a reporter for WUFT News who can be reached by calling 352-392-6397 or emailing news@wuft.org.
Previous Hurricane Maria Caused 2,975 Deaths In Puerto Rico, Independent Study Estimates
Next Sept. 14, 2018: Morning News In 90