By Vanessa Villalobos and Samantha Serbin

Mike Blanchard lives in western Alachua County and remembers the flooding after Hurricane Irma at his property near SW 8th Ave. and SW 91st St.

He’s anxious to see how the flood maps are changing.

“It’s two and a half acres,” he said, and in the hours after the storm, he could kayak around his property.

The Federal Emergency Management Agency (FEMA) is in the process of updating flood zone maps, including portions in and around Gainesville. The current maps can be viewed at FEMA’s website.

Whether or not residents are required to carry flood insurance for their home isn’t determined by the federal government; it’s determined by the mortgage company. If a homeowner has paid off their home, it’s their choice whether to buy flood insurance, but if they have a mortgage and the home is located within the 100-year flood zone map, they’ll be required to carry it.

“Blue is the current one that you’re looking at and pink is the one that is being changed to,” said Lalit Lalwani, an Alachua County civil engineer, in reference to the map.

Alachua County Public Works is holding several informational meetings so homeowners can see if their properties are affected by the change.

“Well, the flood zones are getting smaller, which kind of contradicts what’s happened in reality to me,” Blanchard said.

The public has until Oct. 10 to challenge the new designations, and there will be three more public meetings before that deadline.

If all goes through, the new maps take effect next summer. Civil engineers recommend everyone carry flood insurance, even for homes not in a flood zone.

Hurricanes like Frances, Jeanne and Irma have reinforced that advice.

Blanchard worries about his neighbors being able to rebuild their homes.

“My neighbor is an 87-year-old gentleman who’s had to rebuild his house twice in the last 15 years,” Blanchard said.

The public works office has the proposed maps available to review in person during normal office hours or online using this interactive map.

Vanessa is a reporter for WUFT News who can be reached by calling 352-392-6397 or emailing news@wuft.org.
Previous Marion County Veterinary Center Offers Acupuncture For Horses
Next Sept. 5, 2018: Afternoon News in 90 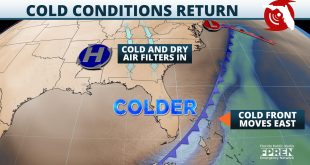 The storm's track shifted considerably overnight and into Wednesday morning, with an expectation that it's now headed for Florida's West Coast and into the north central part of the state on Wednesday and Thursday.