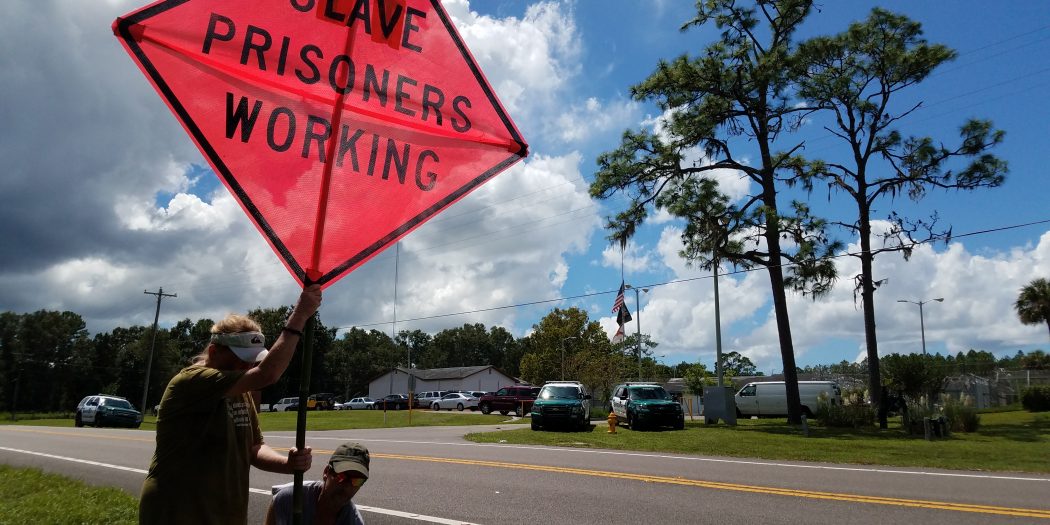 In 2000, Justin Wildes entered the Florida prison system as a 25-year-old telemarketer from West Palm Beach. His 12-year sentence for armed robbery separated him from his partner of about five years, Karen Smith, and their 2-year-old daughter.

Wildes didn’t begin life behind bars as a drug user, Smith said. But he left as one.

Then, 16 months after his release in 2012, he died of an overdose at age 38 in Gainesville, said Smith, 44 and a city resident. “He couldn’t reconcile that world with this one,” she said.

Smith is a prisoner rights activist and secretary of the Gainesville chapter of the Incarcerated Workers Organizing Committee. She helped organize the “Labor Day Camp Jam”: a group of cars and canopy tents across from the Gainesville Work Camp on Northeast 55th Boulevard.

Activists from the committee joined other organizations – among them, the Campaign to Fight Toxic Prisons, the Tampa chapter of Occupy ICE, the Alachua County Labor Coalition, Gainesville Antifascists and the Central Florida chapter of the Democratic Socialists of America – to establish the camp on Saturday as a show of solidarity for the national prison strike that began Aug. 21.

The camp will continue in place until Sept. 9, the last day of the strike, Smith said.

Jailhouse Lawyers Speak, an anonymous incarcerated group of prisoner rights advocates, called for the strike in response to a riot at a prison in South Carolina in which seven inmates died.

Work stoppages, hunger strikes and commissary boycotts have also occurred at 20 U.S. prisons and at least one in Canada, the Campaign to Fight Toxic Prisons posted on its Facebook page Monday. Palestinian and German prisoners have also shown solidarity.

“It’s definitely been successful so far,” Amani Sawari, the Jailhouse Lawyers Speak media representative who is based in Seattle, said in a telephone interview. “Our prisoners are really excited and people are really excited.”

The Florida Department of Corrections said that none of its institutions have seen strike activity.

“All operations are normal at those facilities and none of them were on lockdown,” Patrick Manderfield, a spokesman for the department, said in an email Tuesday.

Smith said that most state prison systems refuse to admit any such strike activity so as not to encourage inmates elsewhere to become emboldened.

“Strike activity, just like all activity in prisons, is hidden,” she said. “It’s hard to see and it’s hard to quantify.”

In April, Jailhouse Lawyers Speak posted on social media a list of 10 demands from inmates held in state and federal prisons as well as detention centers for undocumented immigrants. The demands range from improved conditions in prisons to “an immediate end to prison slavery.”

Smith said the local chapter of the Incarcerated Workers Organizing Committee does not know whether strike activity is underway at the Gainesville Work Camp. She said, though, that it is less likely because work camp populations house inmates soon to be released.

That didn’t stop organizers from showing their support near the work camp Saturday.

As cars sped by at 60 mph, a multigenerational gaggle of about 30 people gathered on the grass to eat, drink and be merry. Activists huddled beneath the shade of polyester tarp, erected protest signs and babysat children through drizzling rain and humidity that stuck clothes to the skin.

Sloan, Smith’s 8-year-old daughter, passed out Polish candies. Ely Roberts, 5, and his brother Keylan, 6, drank juice pouches while playing with Panagioti Tsolkas, an activist with the Campaign to Fight Toxic Prisons. The strike is “a long overdue movement to end the continuation of slavery in this country,” Tsolkas said.

Clad in shorts, Birkenstock sandals and T-shirts that read “prisons are for burning,” activists beat drums and blasted punk music. Performing as “11:59,” Jeremy Hunter, 23, a local high school music teacher, strummed his guitar and sang before a megaphone aimed at the work camp. It was his first time playing music at a protest.

“I just wanted to be part of helping create momentum as far as issues involving prisons,” Hunter said. He added, “Next time, I’ll bring a louder instrument.”

The event remained cheerful despite the somber realities of mass incarceration.

“It’s a capitalistic scheme to profit off our backs,” said Juan Zapata, 22, a senior electrical engineering student at the University of Florida and an activist with the Incarcerated Workers Organizing Committee. “It’s just wrong on top of wrong.”