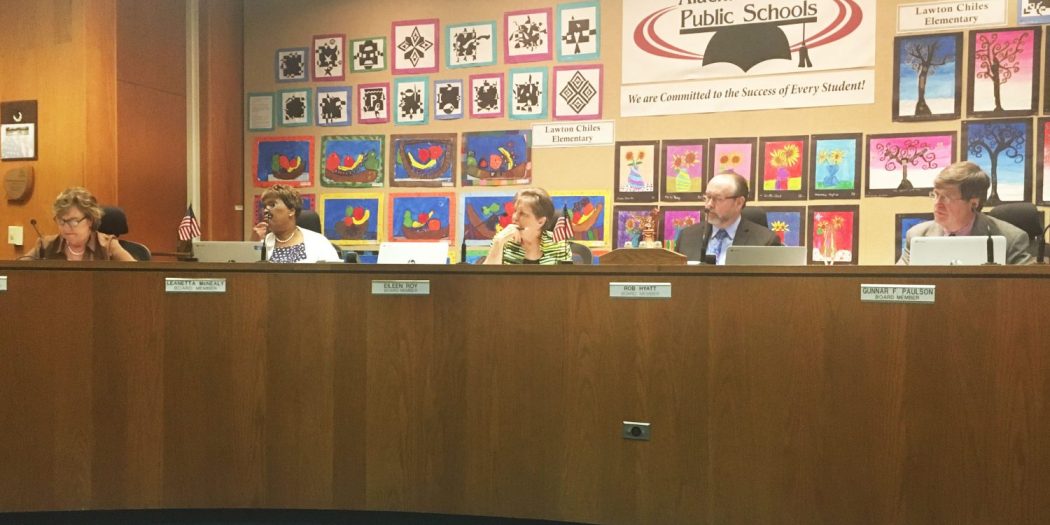 School board members statewide would have faced term limits if voters approved Amendment 8 in the November 2018 election. A judge in August instead threw the question off the ballot. (WUFT News file photo)

TALLAHASSEE — A Leon County circuit judge Monday knocked a proposed education constitutional amendment off the November ballot, saying the wording failed to inform voters of its impact on the creation of charter schools.

The proposed amendment, placed on the ballot by the Constitution Revision Commission, would impose eight-year term limits on school board members and would require the promotion of “civic literacy” in public schools.

But the provision that drew a legal challenge from the League of Women Voters of Florida would have allowed the state to operate and control public schools “not established by the school board,” wording that opponents said would have led to the expansion of charter schools. The proposal was aimed at overturning a 2008 appellate court decision that found the Legislature’s creation of a statewide commission to authorize charter schools was unconstitutional.

“The failure to use the term voters would understand, ‘charter schools,’ as well as the use of a phrase that has no established meaning under Florida law, fails to inform voters of the chief purpose and effect of this proposal,” Circuit Judge John Cooper wrote in a 12-page ruling, removing Amendment 8 from the Nov. 6 ballot.

Cooper called the challenged provision “a significant change” that was not explained by the Amendment 8 ballot summary, which is wording that voters would see when the go to the polls.

“The current Constitution and implementing laws provide district school boards the exclusive right to make the initial determination of whether schools, charter or not, are needed and desirable in their counties,” Cooper wrote. “Without understanding the current role of school boards in approving new schools, voters cannot understand the important change they are making to local democratic control of education.”

He also said the ballot measure “incorrectly implies” that it is strengthening or maintaining the school boards’ role “instead of weakening it by removing a power.”

But the legal fight about Amendment 8 could be far from over, with the expectation that Cooper’s ruling will be appealed. Erika Donalds, a Constitution Revision Commission member who was the key proponent of Amendment 8, called the court’s ruling “disappointing.”

Donalds, a Collier County School Board member who leads the group 8isGreat.org, which is promoting the amendment, said the League of Women Voters “fundamentally opposes empowering families to choose the education setting that best fits their child.”

“Despite the speculation and bunk they’ve spread, I hope voters will be able to make their own decision in November,” Donalds said in a statement. “It is disgusting how many misrepresentations the opposition is willing to put forth to block student-centered school choice options.”

Cooper said voters would have had “a clearer choice” if the Constitution Revision Commission had advanced the charter-school provision as “standalone revision,” rather than grouping it with two other constitutional changes. The commission, which meets every 20 years, is not bound by the one-subject mandate that applies to constitutional changes advanced by the Legislature or by voter petition.

“It chose to bundle the three proposals together to increase, in its view, their chances of passage,” Cooper wrote. “But this court can only permit it to do so if it fully and accurately described all three proposals in the ballot title and description. That it failed to do.”

Cooper also found the ballot measure to be “affirmatively misleading,” since the summary talks about giving the state the power to operate and control schools, but it does not mention authority could be given to other entities, including private companies.

He said the measure was “conspicuously silent about who or what” would be responsible for schools not established by local school boards.

“Contrary to the language of the ballot summary, the amendment was intended to permit that power be given to a wide variety of third parties, potentially including private entities,” Cooper wrote.

“Amendment 8 would have used the feel-good language of civic education and term limits to lure voters into voting ‘yes,’ while wresting local control of schools,” Patricia Brigham, president of the League of Women Voters, said in a statement. “We were confident that the courts would see through the charade and are thrilled that they agree.”

Along with Cooper’s ruling, Amendment 8 is one of six Constitution Revision Commission ballot proposals facing a separate challenge at the Florida Supreme Court. That lawsuit is asking for the state’s highest court to remove the amendments from the November ballot, arguing that the commission overstepped its authority by combining multiple constitutional changes into single ballot items.

A circuit judge has already ordered the removal of Amendment 13, another commission proposal that would ban commercial greyhound racing in Florida. That decision is now being appealed at the state Supreme Court.

In total, 13 proposed state constitutional amendments were placed on the Nov. 6 ballot, including the eight advanced by the commission and five advanced by the Legislature or through petition drives. Each amendment would require support from at least 60 percent of the voters to be enacted.