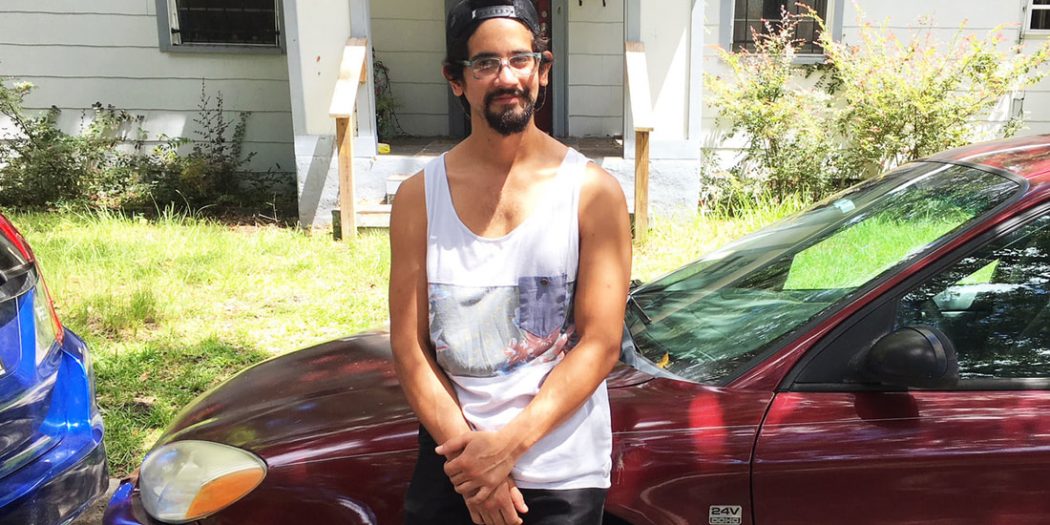 Miguel Barreiro, of Gainesville, had his unlocked car burglarized earlier this year. Now, he says, "It’s better to be safe than sorry and just lock your car." (Stefano Ferreyros/WUFT News)

Gainesville Has Had 575 Car Burglaries So Far In 2018, And Drivers Still Aren’t Always Locking Their Doors

Miguel Barreiro left his house, on Northwest Third Avenue near the University of Florida campus in Gainesville, around noon one Sunday in June, aiming to go to a supermarket. But when Barreiro opened the door of his Ford Taurus parked out front, something wasn’t right.

The glove compartment was open, its contents strewn everywhere. Two to three dollars in change were missing from the center console.

Barreiro, 25, a service technician for a fitness equipment company, then looked for the keys to his work car, a KIA Soul parked 10 blocks away, under the arm rest. They, too, were gone.

Though the thieves didn’t take his work car, he said recently, “I couldn’t work for a whole week.” But while Barreiro avoided being the victim of a car robbery, he is one of a growing number of people in Gainesville whose vehicles have been burglarized this year.

“I never thought it would happen to me, until it actually happened,” Barreiro said.

Girard said another concern is that people are leaving their vehicles unlocked with weapons inside. Twenty-four firearms have been taken from such cars in the city so far this year.

More people are leaving their cars unlocked, which is making them easy prey for perpetrators, especially juveniles, said Officer Ben Tobias, a spokesman for the department.

“A lot of thieves and criminals are not breaking car windows anymore,” Tobias said. “Yeah, we’ll get a window smash every now and then, but the majority of them are juveniles that are actually going through parking lots of businesses, of apartment complexes, residential areas and just trying door handles – and if the door is open, they go in.”

The act of people going from car to car in a neighborhood to see if they are unlocked is called “car-hopping,” said Sgt. Stephen Girard, who leads the department’s criminal investigations unit.

Girard describes the situation as a perfect storm: “We’re short on officers, juveniles know that really not a lot is happening to them when they get arrested or get taken to [juvenile detention center], and parents not knowing their kids are gone in the middle of the night.”

To try to solve the issue, Tobias said, GPD has been posting on its Facebook page admonitions against leaving cars unlocked. And when time permits, police officers will distribute what are called vehicle security report cards. That essentially calls for an officer to test a car door to see if it’s unlocked. If it isn’t fine. But if it is, then a card is left on the car, Tobias said.

GPD officers are also going into local schools to try to stop juveniles from committing crimes.

“They’re trying to work in the schools to say, ‘Look you must think it’s just pulling a door handle and stealing change out of a car, but that’s a felony,’” Tobias said.

After his unfortunate experience, Barreiro urged the public to be more careful about their cars.

“It’s better to be safe than sorry and just lock your car, especially if you have valuables and weapons in there, too,” he said.

On Tuesday afternoon, GPD posted this surveillance video showing a burglary suspect making rounds in Midtown. The department is asking for help in identifying him.

Stefano is a reporter for WUFT News. He can be reached at 352-392-6397 or news@wuft.org.
@stef_ferr95
Previous 2018 Candidate Roundtable: Alachua County School Board District 5 Seat
Next Two ‘Gun Dogs’ Are Helping To Sniff Out Trouble on Alachua County’s School Buses This Year