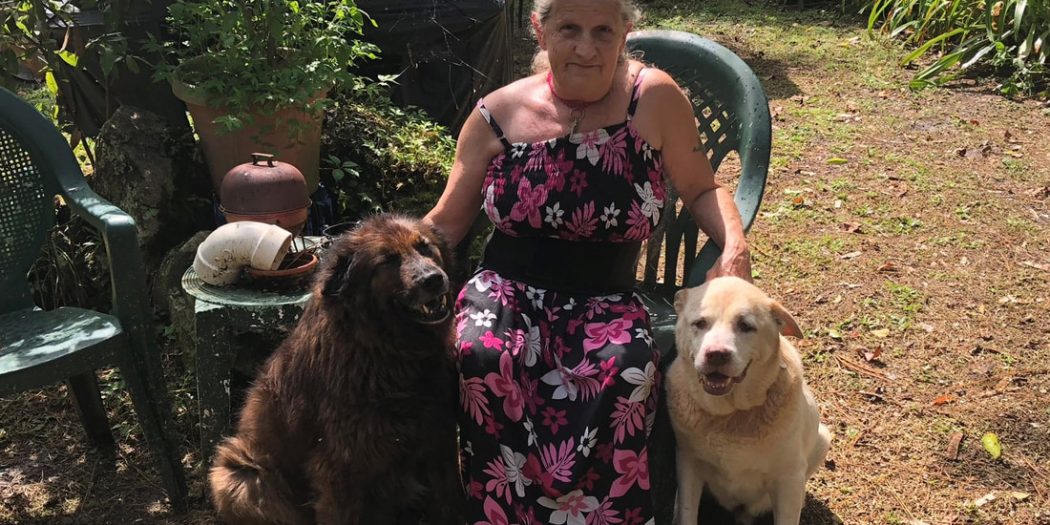 Donna Brannen, 69, with her two rescue dogs, Bear-Bear (left) and Shadow, in her backyard in Hidden Oaks in Gainesville. (Madison Rubert/WUFT News)

The Number of Dog Bites Rose The Past Four Years In Alachua County. No One Quite Knows Why.

Donna Brannen was rushed to an emergency room in April after another woman’s black Chihuahua jumped up and bit her right buttocks at an animal clinic in Gainesville. She was prescribed antibiotics but left with an unwanted scar.

“There are no bad dogs, just bad owners,” Brannen, 69, a former bookkeeper who has been rescuing animals from abuse and neglect for a half-century, said recently. She was at the clinic to get treatment for her eight rescue pets when she bent down to pet the dog that bit her.

In June, the same dog bit her again, this time on the foot, at the same clinic, Brannen said.

She’s had it with this four-legged creature: “My life is about animals. I do not believe in murdering any animal for any reason— however, there are exceptions to the rule.”

Many more Alachua County residents may be feeling the same way. The number of animal bites in the county – and dog bites in particular – has increased dramatically over the past few years.

According to statistics from the Florida Department of Health, there have been 519 animal bites reported in the county the first seven months of this year. That’s on pace to far exceed the 756 documented in 2017. Last year, there were 477 dog bites. So far in 2018, there have been 312.

Animals are not getting more aggressive just in Alachua County. The American Veterinary Medical Association estimates that about 4.7 million people across the U.S will be bitten by a dog this year, with the majority of victims being children. Eight hundred thousand of them will require medical treatment for dog bites each year, according to the association.

All medical facilities encountering someone reporting an animal bite must notify the state. That’s regardless of how one might get to an emergency room. Alachua County Fire Rescue received 44 calls for dog bites in 2017; this year, it was 27 as of this week, Assistant Chief Jeff Taylor said.

One factor causing the escalation in dog bites is the increase in animal adoptions.

The Alachua County Humane Society reports that 1,153 animals have been adopted as of July, compared to 1,591 all of last year, said its development coordinator, Danielle Cummings.

Peruyero attributes the escalation to both less preventative care for the animals and proper guidance for owners and people in general.

“Ninety percent of dog bites are a result of human error,” he said. “It’s not in their nature to actively seek a person to bite.”

Suggesting that a dog having poor health and not being neutered before age 2 as additional factors, he said, “If a dog feels uncomfortable or nervous, it lashes out and becomes aggressive. … You add testosterone and estrogen to that mix and it’s a formula for failure.”

Claire Hedrick, director of The Greater Gainesville Dog Fanciers’ Association, said most bites happen to people who are tending to a hurt dog, or breaking up a fight involving two or more.

“What would cause an increase would be most likely human behavior,” Hedrick said. “Your dog reads your mood and feelings and responds accordingly.”

Dr. Terry Curtis is a clinical behaviorist at the University of Florida Department of Small Animal Clinical Sciences. She said that although unattended health issues could make a dog feel discomfort or pain, it is not a major reason why dogs bite people. Fear is the issue, she said.

While examining children bitten by dogs who were getting treated at a Jacksonville hospital, Curtis said, she noticed that all the injuries were to the face, hands or arms of the boy or girl.

“Bottom line: Dogs bite people because they are afraid, not because they’re attempting to exert dominance over people.”

Madison is a reporter for WUFT News who can be reached by calling 352-392-6397 or emailing news@wuft.org.
Previous Gainesville Community Redevelopment Agency To Pilot $400,000 In Midtown Security Positions
Next August 10, 2018: News in 90