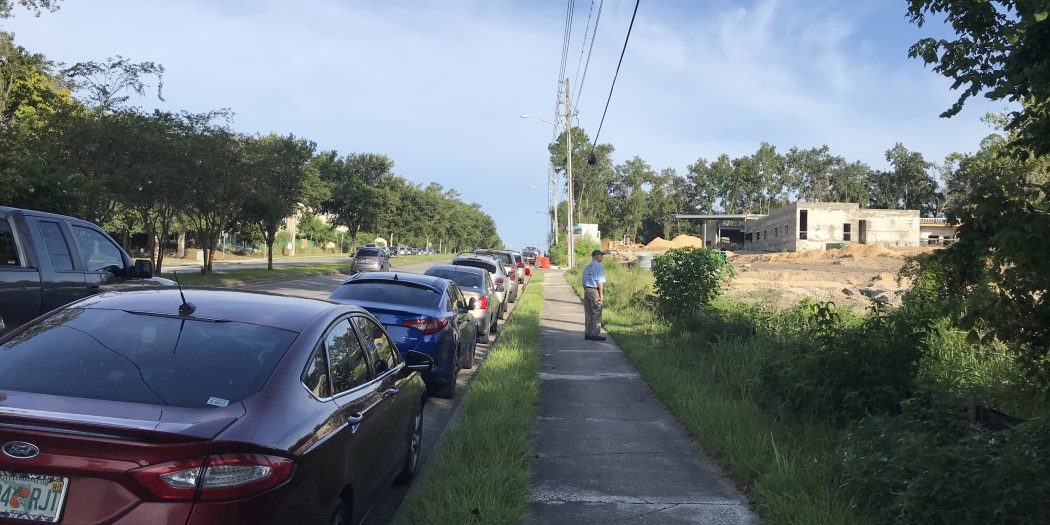 The line of parked cars continues to fill up, as cars arrive as early as 7 a.m., while construction of the St. Anne Early Learning Center continues, Monday, July 30, 2018. Once construction is finished the learning center will only increase the demand for parking in the area. (Edgar Chavero/WUFT News)

The Florida Department of Transportation has been shuffling through more than 350 comment forms of public feedback over the last few weeks. While they’ve been filled with a mixed bag of opinions, FDOT has still approved a preliminary cost estimate for an urban development plan for West Newberry Road.

The proposal is expected to be put up for final approval within the next three months, according to Troy Roberts, a communications specialist at FDOT.

Almost 50 people were present at the meeting, including nearby business owners and activists, along with FDOT representatives and Alachua County officials.

The current proposal would convert the 109 on-street parking spots along both sides of the road into seven-foot bike lanes. FDOT set the estimated cost of the project at $375,000.

After the meeting FDOT asked residents to provide feedback on the new proposal.

226 people wrote that they were in favor of keeping the on-street parking spots, and only 37 people wanted them turned into the proposed bike lane. These public comments were sent to FDOT before they published their records on July 23.

“The budget and construction plans are now in place, but FDOT has to make sure that the project is something the county wants,” Roberts said. “It wouldn’t be done overnight, or in a few days, because it’s something that the people affected still want to fight for.”

He added, that FDOT will not make any final decisions or begin construction on the project before communicating with Alachua County and its residents.

“We take the comments residents have given us into consideration moving forward,” said Roberts. “Business owners have made their thoughts clear. What’s important is to make a decision that will benefit the entire county.”

Most of the residents that contacted FDOT continued to cite the importance that the parking spots have for employees of nearby businesses.

“Designated parking spots for clients and employees are limited,” said Mark Coleman, a Doctor of Veterinary Medicine at the Suburban Animal Hospital located on West Newberry Road. “Additional street parking is often valued as an only option or used for convenience.”

However, some officials, activists, and local residents expressed their support for the proposal.

“The proposal is a great idea, as it would connect the bike lanes on either end of the busy corridor,” said Alachua County District 3 commissioner Robert Hutchinson. “And as a general principle, the government should not be using taxpayer’s money to pay for parking for private businesses.”

“I support the connectivity that closing the gap in bicycle infrastructure will bring,” said Kristen Young, the vice president for Gainesville Citizens for Active Transportation (GCAT), credited with championing the new proposal. “West and Northwest Gainesville has poor connectivity for bicycle commuters. The census map showing commute rates reflects this, showing some of the lowest bicycle commute-to-work rates in the city.”

Alachua County officials and FDOT will meet again next week to potentially set up a date for FDOT to make a final decision. The department’s mailbox remains open for residents to share their comments on the issue.

“The feedback we’ve received in favor of the parking spots are very important to us, and the issues those employees are having will be brought to the forefront of the discussion if FDOT decides to go through with the project,” Roberts said. “The county will look to improve alternative parking options for these areas as well.”