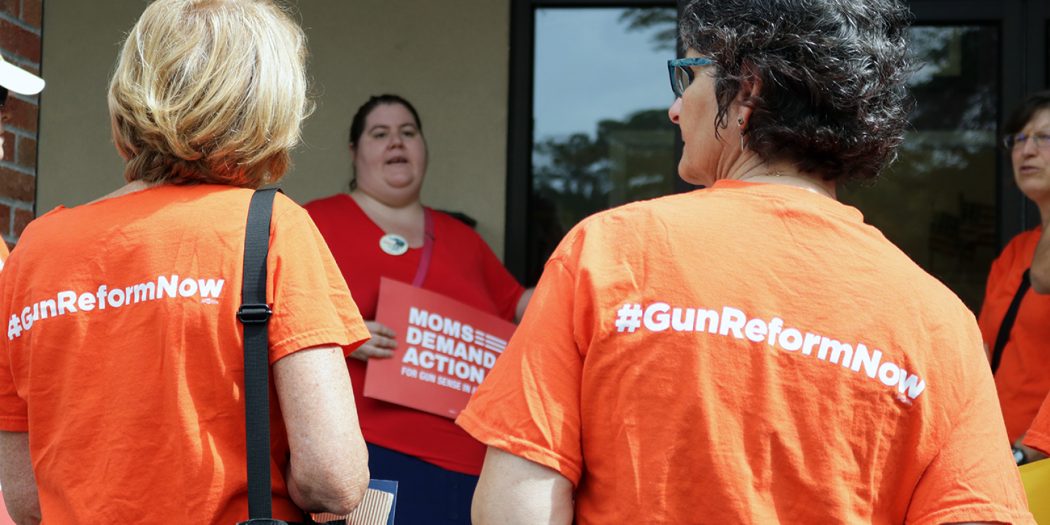 Protesters could be heard chanting “we demand change” outside of U.S. Rep. Ted Yoho’s office on Thursday, July 26, as students from March For Our Lives stopped in Gainesville on their Road to Change Florida bus tour aimed at educating young voters and ending gun violence.

The group outside of Sen. Keith Perry’s office brought signs that showed support for the Parkland students and demanded gun reform. One addressed the Marjory Stoneman Douglas High School shooting directly with the words “Never Again” while another read “Make America safe.”

The crowd’s energy grew as more protesters showed up, but before any chants could begin, Perry came outside to address the crowd himself.

The students from the March For Our Lives group asked if they could join him inside to have a conversation and he allowed five of them in.

“They also have had serious inaction since their promises for gun reform after the Marjory Stoneman Douglas school shooting,” said Natalie Alatriste, manager of media relations for the March For Our Lives Florida tour, about the politicians that protesters addressed on Thursday.

According to the March For Our Lives website, the goal with the Florida tour is to “register young people to vote and end gun violence.” They are visiting every congressional district to encourage political leaders to work toward that goal.

“I’m here today to stand up to the politicians who aren’t doing the right thing,” said District 8 Senate candidate Dr. Olysha Magruder who attended the protest outside of Perry’s office.

“I think it’s important for him to see that there are candidates running against him that are doing this,” said Magruder.

After almost an hour, the students emerged from Perry’s office to a round of applause from the protesters.

Perry was met with many questions.

“I have a lot of opinions,” said Perry, when asked what his opinion was on an assault weapon ban. “Opinions are different than making policy that is going to affect your life and the children’s lives.”

While he did not give any specific details about his stance on gun reform, he said the students gave him a list of ten points that he was going to look over and research.

Over 1,000 people responded to the Facebook event set up by Jovanna Liuzzo, an Eastside High School senior, promoting the full day of activities in Gainesville revolving around educating and registering student voters while continuing the debate for gun reform.

Survivors from the Parkland, Florida, school massacre announced in early June that they would be embarking on a two-month summer tour across the nation to call for more action on gun control and stage voter registration drives along the way.

Their journey, with 50 planned stops in 20 states, began in Chicago on June 15 and will end in Newtown, Connecticut, on August 12.

According to the March For Our Lives website, the separate Florida bus tour will visit all 27 Congressional Districts in Florida before August 1.

The two tours are scheduled to meet for the first time in Tallahassee for a “Rally in Tally” on Saturday, July 28.

“We are really encouraged by the young people speaking out and we want to be here to support them,” said Veronica Donoso, a leader with Indivisible Gainesivlle.

The local organization was created after the 2016 election and often supports other organizations that aim to help the community.

A Q&A with local students and those from Marjory Stoneman Douglas High School took place from 4 p.m. to 7 p.m. at the Gainsville Woman’s Club, 2809 W. University Ave.

The Alachua County Supervisor of Elections will have a booth throughout event to register and preregister citizens to vote, update registration and will have vote-by-mail forms available.

Kaitlin is a reporter for WUFT News who can be reached by calling 352-392-6397 or emailing news@wuft.org.
Previous Judge: Release Florida School Shooting Suspect’s Statement
Next Two Years Later, The Family of A Gainesville Homicide Victim Copes With Their Loss