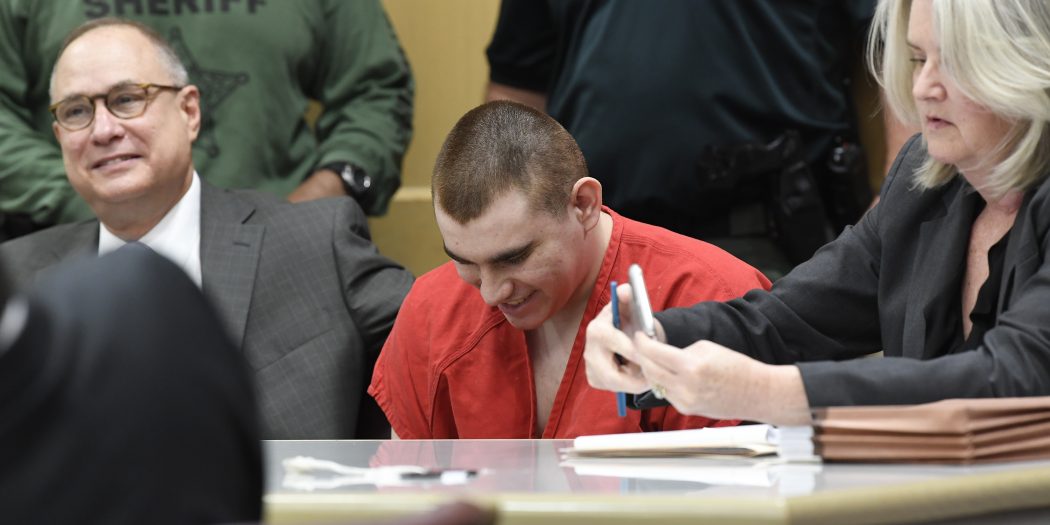 School shooting suspect Nikolas Cruz, center, sits in the Broward County courthouse in Fort Lauderdale, Fla., Friday, June 8, 2018. Cruz's attorneys are arguing against the release of his full confession. His attorneys cite concerns over causing more trauma to the Parkland community and harming their client's right to a fair and impartial trial. Cruz, 19, is charged with 17 counts of murder and 17 counts of attempted murder in the Feb. 14, 2018, school shooting at Marjory Stoneman Douglas High School in Parkland, Fla. (Taimy Alvarez/South Florida Sun-Sentinel via AP, Pool)

Much of the hours-long statement given by Florida school shooting suspect Nikolas Cruz to investigators just after the Valentine’s Day massacre that killed 17 people should be publicly released, a judge ruled Thursday.

Broward Circuit Judge Elizabeth Scherer said in her order that much of the “non-confession” portions of the statement should be released in 10 days, barring any appeal by the defendant. Public Defender Howard Finkelstein said in an email that a decision on appeal will be made after Cruz’s lawyers see the final version edited by prosecutors.

Media outlets including The Associated Press sought release of the statement, arguing that Florida’s broad public records law required it. Cruz’s attorneys wanted all of it suppressed, contending disclosure could jeopardize the 19-year-old suspect’s right to a fair trial in such a high-profile case by unduly influencing potential jurors.

But Scherer sided with the media in her decision.

“While it is true that this case has gained vast and widespread media coverage, this fact alone does not demonstrate that closure of the statement is required,” the judge wrote. “The fact that the instant matter may be considered high-profile does not in itself give the defendant the right to close the flow of information to the public.”

Cruz is charged with 17 counts of murder and 17 counts of attempted murder in the Feb. 14 shooting at Marjory Stoneman Douglas High School in Parkland. His attorneys have offered a guilty plea in return for a life sentence, but prosecutors are pursuing the death penalty.

The statement Cruz gave to detectives after his arrest began shortly after 6 p.m. and lasted until about 5:13 a.m. the next morning, according to the judge’s order. All of it was videotaped.

Scherer ruled that the statement can only be released after specific redactions to both the video and the transcript that removes comments that appear to be Cruz’s confession. Under Florida law, the “substance of a confession” cannot be released before trial.

Cruz’s lawyers argued that so much of the statement contained elements of a confession that the entire thing should be suppressed, in addition to their fair trial arguments. Scherer said the news organizations’ argument in favor of as much disclosure as possible was correct.

“Extensive details about the defendant, his history, his behavioral history, and his actions during and after this incident, have already been widely reported,” she wrote. “Withholding the non-confession, non-exempt portions of his statement from the public will not prevent further coverage of these proceedings.”

The Associated Press is a wire service to which WUFT News subscribes.
Previous After 35 Years in Public Radio, NPR’s Only A Game Host Has Many Plans For Retirement
Next Parkland Students Lead Protests In Gainesville