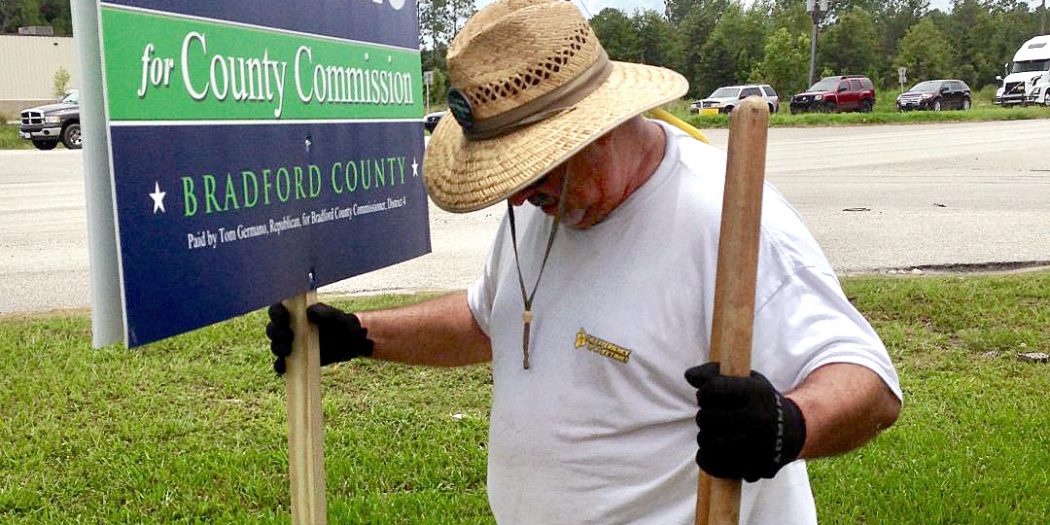 As the weekend rain fell across Bradford County, Tom Germano, rain-soaked and dripping with sweat in his beige hat and black gloves, loaded his pickup truck with campaign signs to plant in the muddy grass around Melrose.

With the primary election just over a month away, Melrose residents have nine candidates, one unopposed, running for county commissioner in the four different counties — Putnam, Bradford, Alachua and Clay — that govern the area. Majority of Melrose falls under the jurisdiction of Bradford and Putnam counties.

Town residents are able to vote in county elections where their property is located.

Clay County, which shares a very small sliver of the town with only five homes, has three candidates running in District 4: Cheryl Owen, Democrat, and Republican candidates Smitty Huffman and incumbent Gavin Rollins.

Larry Harvey and Tom Williams, both Republicans, are running for District 4 in Putnam County.

“Bradford is a very challenging county,” said Rudolph. “We always go to the meetings, bring evidence of various issues, and we get ignored.”

The candidates have a few top priorities in common for improving the city: fixing roads, protecting the water and improving infrastructure and tourism.

Elizabeth Saccheti, 62, said that getting the roads fixed is of the utmost concern.

“On my street, there’s a huge pothole that’s always a pain for me to drive over,” Saccheti said. “I have to always drive around it, and I end up driving over grass, which gets really annoying really quick.”

Riddick, current Bradford County District 4 commissioner, has a method to improve the roads of not only Melrose, but all of Bradford. Riddick said the board of commissioners recently approved a proposal to place chip seal, a special protective wearing surface, on county roads.

“So we recently got approved for a company to come in early August and install chip seal on the roads,” Riddick said. “Inserting the seal will help the road last around 10 to 12 years without any problems.”

While the project is in test phase, only six roads will get the sealant. Should the project succeed, it will be implemented county-wide.

For Putnam County candidates Williams and Harvey, their ideas start with simply listening to the community members to see what ideas they have.

“Well, the first thing we have to do is go to their meetings and find out what would satisfy them,” Williams said.

“It’s a town that wants to be listened to, but nobody wants to listen to them.”

“Melrose is a very unique community,” Harvey said. “The biggest thing to me is that they want to get the recognition they have been asking for and want to bring ideas to the board.”

Bradford candidates Germano and Rudolph want to protect waterways, which they say is vital for Melrose to flourish.

“We want to drive tourism in the town, and we do so by protecting our waterways,” Germano said.

One of the biggest perceived threats to the town’s water system comes from proposed phosphate mining in Melrose.

“We want to hold these proposed miners accountable for coming up with a plan that doesn’t negatively harm the environment,” Rudolph said. “There’s no proof that it doesn’t strip the land and negatively impact the aquifer surrounding it.”

“Water protection for me is a huge concern,” Saccheti said. “I don’t want to end up having to go to an emergency room because of poor and dangerous water ending up in my supply.”

For Carlos Chardon, 39, and Danielle Aragon, 37, water is a way of life for their family.

“We like to come out to the lakes every weekend with our kids and go boating,” said Chardon. “We don’t want to come out here and know that our kids’ health could be at stake when they go in the water.”

Riddick wants to further protect Lake Santa Fe by eliminating old septic systems that could be leaking sewage into the lake by converting those homes to city water.

“With how close the houses and wells are, which are only 75 or 100 feet away from each other, we have to try and provide an option to tie in the waters and protect Lake Santa Fe,” Riddick said.

Aragon said water protection is her prime concern for who gets her vote.

“My vote is simply coming down to whoever is going to do the most on keeping the waters clean,” said Aragon. “The last thing that needs to happen is one of my kids getting sick because no one wants to protect the lake water.”

Rudolph’s focus is on better ecotourism for the town and county. She sees Bradford County as an opportune location for Keystone Heights’ new trailhead.

“If we give them a place to stop and leave their cars for the trail, that will improve ecotourism in Melrose,” said Rudolph. “We can do that by adding a bike trail or a walking trail.”

Putnam County’s Williams wants to highlight the town’s nature and outdoor activities by working with the county’s kayaking club and the rail-to-trail committee to boost ecotourism.

While the candidates are looking to improve ecotourism and infrastructure within Melrose, some residents stress they do not want the city’s historical nature to disappear.

“I moved to Melrose for the historic feel and aesthetic of this town, and I don’t want anyone to mess with that,” Saccheti said. “Hopefully they can improve some of the underlying issues at no cost to what makes Melrose the town that it is.”

Harvey, who is also involved with the historic community, is looking to ensure that the boundaries of Melrose’s historic district remain intact.

“Melrose is a very important community and they like their individuality,” Harvey said. “We need to promote the historical side of it, as well as all of the good parts of the county.”