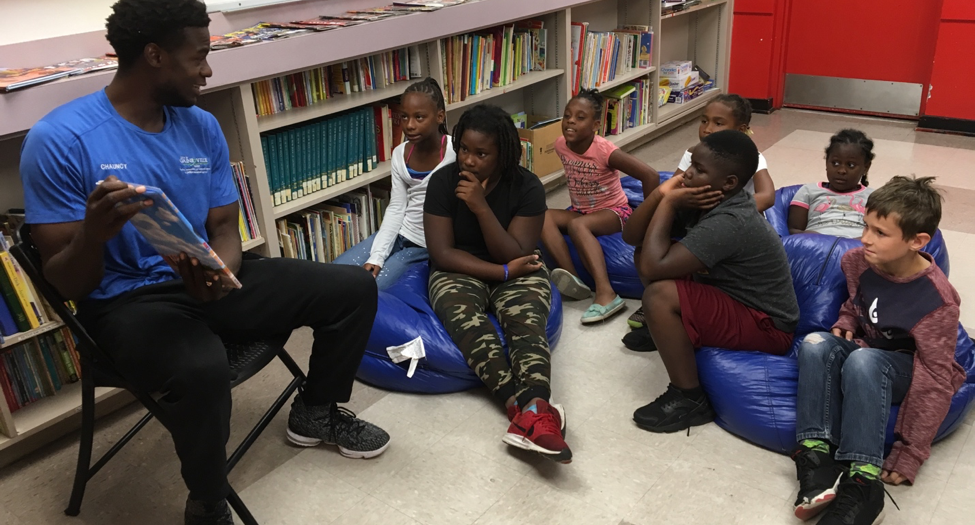 The seven boys and girls plopped down on purple bean-bag chairs inside Porters Community Center in Gainesville one morning this week and began reading children’s books.

Omarion Johnson, 9, read “Those Shoes,” about a boy named Jeremy who desperately wants the newest, coolest shoes. Everyone else at Jeremy’s school has them, but his grandma couldn’t afford to buy him a pair. Omarion could relate – he wears his Nike Jordans almost every day.

But the fourth-grader at J.J. Finley Elementary School also understood the book’s message, saying, “He just realized he had his own shoes and it didn’t matter what it looks like.”

“I liked that it was history,” said Cerenity, a fourth-grader at Lawton M. Chiles Elementary School. “I like history books and biographies.”

The children were taking part in a new program aimed at spurring African-American children to read more. Called I-Read, the city Parks, Recreation and Cultural Affairs Department (PRCA) has incorporated the initiative into its summer camp curriculum at its six community centers.

The program is also seen as one step toward lowering the achievement gap between white and black students in Alachua County, officials said.

The Rev. Gerard Duncan, pastor of Prayers by Faith Outreach Ministries, created I-Read. Duncan said he was inspired because his 8-year-old daughter was going into third grade, one of the most stressful years in terms of reading and testing. Doing research taught him that African-American children read less when the books at their disposal don’t speak to them.

“Children of color would be more engaged in reading if they can identify with those books,” Duncan said. “The reality of that (is) that the textbooks that most minority kids are reading – ‘Jack, Sally Sue, we went to the zoo’ – these kids ain’t going to no zoo.”

The pastor said he compiled a list of books that he deemed more relatable to children of color. The Panhellenic Council at the University of Florida donated the books, and The Rinker School of Construction built and donated bookshelves to all community centers, he said.

Five of the community centers that offer I-Read are in East Gainesville and serve a total of about 200 children, said Ben Dillard, the PRCA recreation supervisor. Between one to two hours a week is dedicated to I-Read, depending on the schedule, Dillard said.

The English Language Arts (ELA) achievement gap between white and black students in Alachua County did not improve during the 2017-2018 school year.

The Florida Department of Education assessment showed a 45 percent difference in passing rates between the two groups in grades pre-K through 12th-grade. Seventy-four percent of white students passed the test, while only 29 percent of black students did so.

Kevin Berry, a curriculum specialist for Alachua County Public Schools, said a number of barriers contribute to the achievement gap, and that the district’s equity department is working with different community members to solve the problem.

“Our children belong to all of us, and so it’s going to take all of us to really work through this,” Berry said.

Dillard said volunteers at the community centers read to the children as part of I-Read.

“If we can read a little bit to them, they can start hearing part of the story,” he said. “Then we give them the book, and they want to know what happens next, and the only way to do that is to finish the book.”

Recreational aide Chauncy Walker read “Ron’s Big Mission” to the children gathered at the Porters center on Wednesday morning. The book is based on the true story of Ronald McNair, the nation’s first black astronaut, who as a child in the 1950s was not allowed to check out books at his local library in South Carolina because of his skin color.

“That’s not fair,” the children shouted as Walker read the part where a librarian denied the young McNair, who, by the way, after standing up to the librarian, the police and even his own mother, eventually got his own library card and checked out the books.

“So, what if little Ron would’ve never got to check out those books?” Walker asked the children.

They looked at him attentively, but didn’t offer an answer. Walker then suggested they look to McNair, who died during the launch of the Space Shuttle Challenger in 1986, as a role model.

Dillard said his department hopes to continue I-Read as part of its afterschool programs once the academic year starts in August.

Catie is a reporter for WUFT News who can be reached by calling 352-392-6397 or emailing news@wuft.org.
Previous July 18, 2018: News in 90
Next Liberty Phoenix Makes New Music With Folk Super-Group Pine