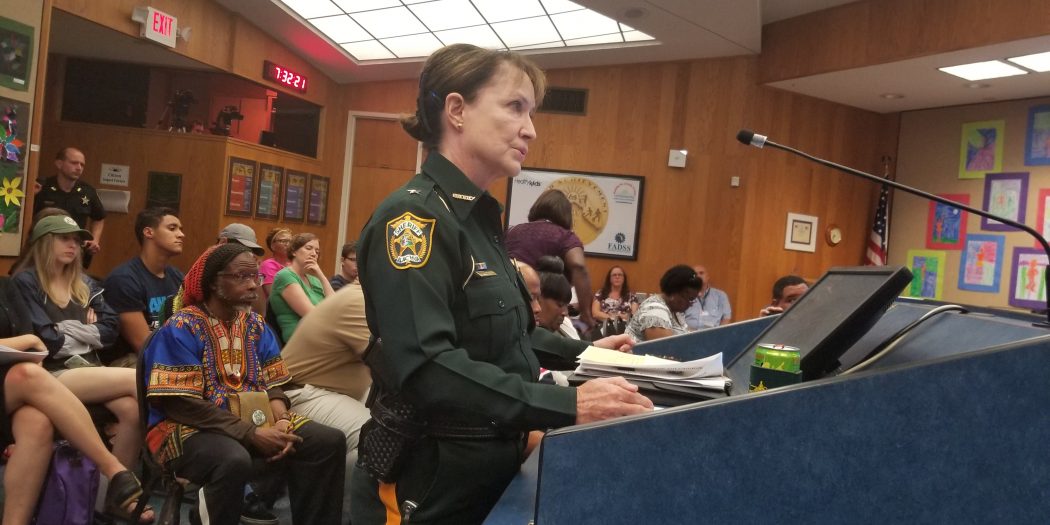 Alachua County Sheriff Sadie Darnell said that when she came into today’s meeting, she was ready to walk out on a deal she didn’t agree with. However, Superintendent Karen Clarke’s offer was just high enough for her to accept. (Matthew Arrojas/WUFT News)

In a workshop last week, Sheriff Sadie Darnell asked the school board for an additional $430,000 for her school resource officer program on top of the $680,000 the school board initially offered her. School board members were hesitant to commit this money, with many citing the fact that the extra money would need to come out of the board’s general fund.

Still, during the board’s meeting Tuesday night, the board unanimously agreed with Superintendent Karen Clarke’s suggestion of $215,000 compromise for ACSO. That’s about half of what Darnell was asking for, summing to a grand total of about $895,000 for the 2018-19 school year.

“I was kind of reviewing my notes from previous meetings saying, ‘Where can we go?’” Clarke said after the meeting. “I went back and looked at the presentation from the workshop and the sheriff made a point to say, ‘We’re quibbling over $430,000.’ So I said, ‘Well, if that’s how far apart we are, let’s meet in the middle.’”

After factoring in the raises the board will have to give the other police agencies providing SRO services, the board will be contributing $430-440,000 total, Clarke said. The money will be coming out of the board’s general fund.

Darnell accepted the offer, although she said that she wants to move toward a more even split of the SRO costs between the school board and the Board of County Commissioners for next school year.

“The superintendent was willing to find the middle ground,” Darnell said after the meeting. “I don’t necessarily agree with it, I don’t think it’s enough – I believe 50-50 is the fair share – but let’s work with it. School’s starting right around the corner and it boils down to the safety and concern for young people in our schools.”

Board members Gunnar Paulson and Eileen Roy were unhappy with the final deal, although they ultimately voted in favor of the compromise.

“I want to be on record here and say I think this is more than we should have offered,” Paulson said. “But, to make sure we get it done, and have our children, to make sure that they’re safe, and our employees, I’ll go along with it.”

“I also second that remark,” Roy said. “I am voting for it, but under duress, only because we are desperately in need right now for coverage of our schools.”

After the meeting, Roy said the board was left without very many options. The Marjory Stoneman Douglas High School Public Safety Act that the Florida legislature passed this spring requires school districts to have law enforcement present at all public schools, and with the upcoming school year one month away, she said the school board was desperate to strike a deal.

The High School Public Safety Act gave the school board more money to fund SRO programs, so the school board doubled the amount of money they were giving to all four police agencies that were providing school resource officers the prior year. Roy said that the Gainesville, Alachua and High Springs police departments all accepted the extra money, though Darnell did not.

As part of the motion that the board unanimously agreed on, the other three police agencies will be receiving the same per-officer raise that the school board offered ACSO, Clarke said.

“It’s not fair to do it for one agency and not the others who are in our schools every day also,” she said.

Darnell said the Board of County Commissioners was pressuring her to strike a more equitable cost-sharing deal with the school board in the wake of the extra state funds. That’s why she has been so adamant on getting more money, saying last week that the commission might cut her funding if she doesn’t negotiate a deal to their liking.

“I don’t know if the Board of County Commissioners will harm my law enforcement budget if I accept this amount, but I agree with it and I accept it,” she said.

After the meeting, she said she thinks the commissioners may be happy with the deal for this school year, but will almost certainly push harder next year for a 50-50 split in funding. With the deal voted for in Tuesday’s meeting, the county will be paying about 64 percent of the SRO program costs for the 2018-19 school year, according to documents provided by Darnell.

While the sheriff is looking for a 50-50 split, multiple county school board members suggested exploring alternative options for the 2019-20 school year. After the meeting, Clarke said the board will examine what other school districts did as a result of the High School Public Safety Act to see if there is a more cost-effective and equally secure method of complying with the law.

For now, all the board members agreed that the need for a safe school environment outweighed the board’s desire to negotiate a more economical contract with ACSO.