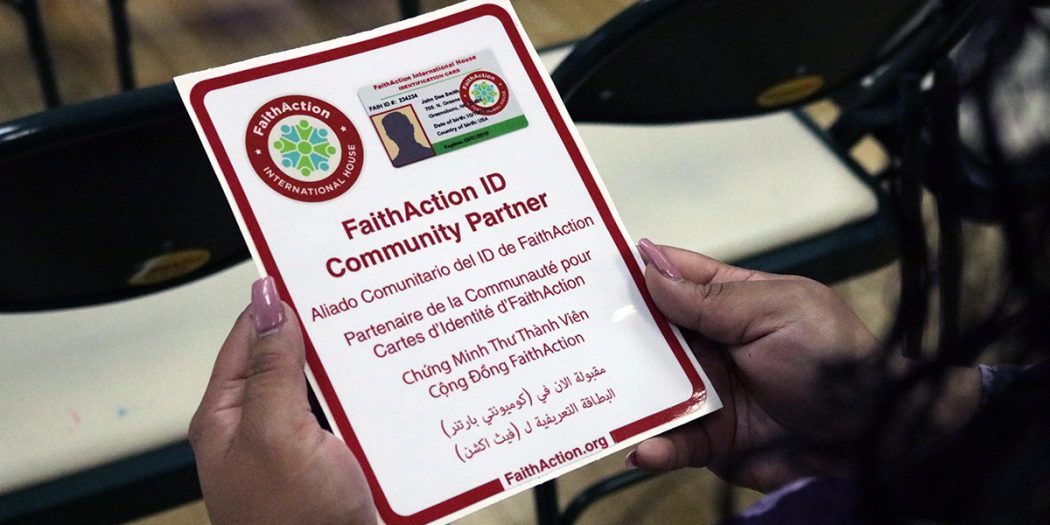 A woman looks at a sign that was passed around at the Madres Sin Fronteras meeting Monday, July 16. This sign is available for businesses to put up to show they accept FaithAction IDs. (Kaitlin Hall/WUFT)

Madres Sin Fronteras and the Human Rights Coalition of Alachua County have proposed the idea of a community ID system to Gainesville residents. This system would allow people with limited access to state-issued IDs to receive locally-issued ones.

The Rev. David Fraccaro from FaithAction International House came to Gainesville Monday, July 16 and Tuesday, July 17 to speak with community members, elected officials and law enforcement about the FaithAction ID Initiative that has been running in Greensboro, North Carolina since the summer of 2013.

“I am here because of my nationality,” said Macarena Carretero, who attended the Monday meeting to gain a better understanding of the ID system. “I have met a lot of immigrant workers that have had to live in the shadows and I know how hard it is for them.”

According to the FaithAction website, their intention with this initiative is to provide IDs for any resident in a community that may not have access to government-issued forms of ID. This includes immigrants, youth, elderly, the LGBTQ community and special needs.

This initiative began five years ago when FaithAction sought to bring together the immigrant community with law enforcement and create a better relationship between the two by building bridges of greater understanding, trust and cooperation. It led to the creation of a locally-issued ID system in Greensboro, North Carolina, that allows residents to have access to certain services and feel a type of security they were lacking without identification.

“When people are afraid to report a crime, it is less safe in the community for all of us,” said Fraccaro during his presentation.

FaithAction works to ensure law enforcement participants that their role is to serve and protect all residents in a community. This includes those without state-issued IDs.

The FaithAction ID does not replace a driver’s license, does not provide access to any social welfare services, and cannot be used to vote. While it does include a photo, name, address and date of birth –  its purpose is to help better identify, serve and protect community members. It does not to have the same credibility as a state-issued ID.

Depending on what sectors and businesses choose to accept the FaithAction ID, this is a form of identification that can be used along with other forms to receive health care, enroll in school, turn water and electricity on at the recipients’ address and even open bank accounts in some cases.

“This is not an immigrant ID card,” said Fraccaro. “This is a community ID card for any resident.”

Over 13,000 FaithAction IDs have been issued in North Carolina since 2013. In this group of recipients, immigrants from 65 countries are represented. While those from Mexico did constitute the largest group, the United States came in second.

According to Fraccaro, this is because many homeless and elderly U.S. citizens do not have access to the documents the DMV requires to receive a state-issued ID.

By encouraging all members of a community to receive a FaithAction ID, not just those that need it, the organization ensures that the IDs cannot be used as a tool to profile recipients.

FaithAction encourages more participation by teaming up with businesses in the community. In Greensboro, over 30 businesses accept FaithAction IDs and provide special offers when they’re used.

From restaurants and stores offering discounts to the local YMCA waiving the guest fee, anyone in the community can benefit from having the card.

There is a vetting process for receiving one of these IDs that local law enforcement is closely involved with.

Cards cannot be obtained fraudulently, and they must be renewed after one year.

In Greensboro, ID drives are held from every month to every six weeks in some areas where community members must fill out the application, have their photo taken and then wait to receive the ID in the mail. Law enforcement is present at these drives and typically use that time to connect with residents waiting in line.

“Crimes have been solved because people feel humanized,” said Fraccaro, who claims the ID system has built more trust between the community and police officers, allowing more people to come forward when there is a crime to report. “They like the law enforcement they meet at drives.”

The drives have become a space for members of the community to receive counseling and health care they may not be able to afford elsewhere.

According to Fraccaro, the program would cost anywhere from $10,000 to $15,000 a year. Madres Sin Fronteras said the program would not be funded by the government, these funds would be raised by local organizations.

The issue will be discussed at the Gainesville City Commission meeting Thursday, July 19 at 1 p.m. in the City Hall Auditorium.