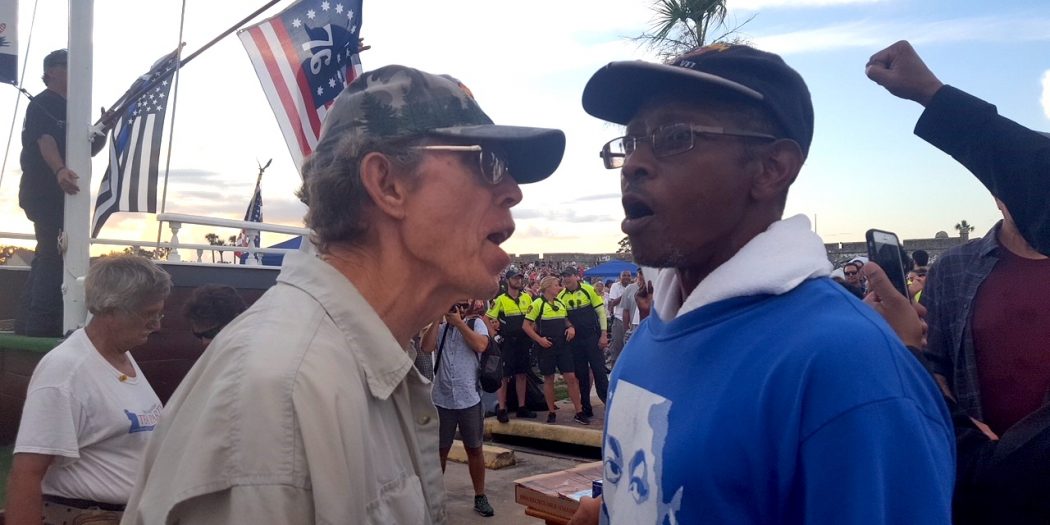 A group of protesters in St. Augustine marched for the removal of an obelisk honoring the Confederate cause.

The July 4 protest near the city’s bayfront also featured a call to the University of Florida as part of the protesters’ chants.

“The whole idea was disruption, and I think anyone who saw it would agree,” Rev. Ron Rawls, the 51-year-old leader of St. Paul AME Church, said. He led a crowd of about 25 people through the city’s bayfront with flyers and chants, asking for the removal of the obelisk in the Plaza de la Constitucion — a state-owned property governed by the University of Florida’s Historic St. Augustine Board.

Thomas Bryant III has lived in the city for twenty years.

“This issue is around the Confederacy, and the lack of compassion or consideration of what it means to the black community and what it represents,” the 61-year-old Bryant said. 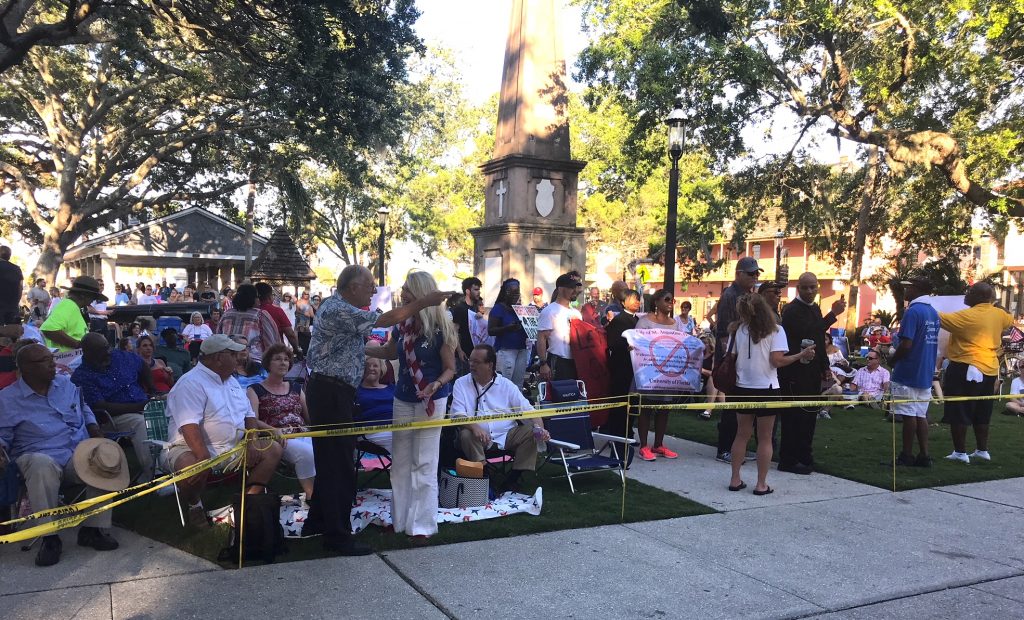 About a month ago, the board voted unanimously to keep the memorial, which also includes the ashes of Confederate Gen. William Loring.

“The board believes it’s there to interpret history, not change it,” UF spokeswoman Margot Winick said. “And so, we want to bring in other groups that can enhance the understanding of our history, especially for future generations.”

“Ron Rawls is a race baiter, OK? A race baiter, and he is stirring up a lot of poop with a very small amount of people,” Heimbold, 78, said.

Victoria Gerry, 41, a local woman waiting for the annual fireworks show, said, “I understand the protests are about the black community, and that’s fine, and I respect it, but to me honestly it’s about all people — of all color, of all races — we should come together.”

Protester Nicole Sparrow, 31, brought her 6-year-old daughter out to march. She said she believes her very existence is in jeoprady, and it’s not as simple as all people coming together.

“It’s important that I show my children what the issues are that I’m going through, because in the near future, they will have to do this same type of organization and this same type of marching to get the same type of justices served for their communities,” she said.

Some people cheered them and asked questions and accepted the flyers demanding the city and UF board reconsider their decision to allow the marker to remain.

“UF is one way in Gainesville. In Gainesville, they take monuments down,” Rawls said, referring to the removal of Old Joe 11 months ago from outside the Alachua County government building. UF had no role in that, nor in the subsequent renaming of the Alachua County School District office. “In Gainesville, they rename buildings that are named after Confederate soldiers because they understand that they were traitors. But over here, UF does not use the same mantra.”

Other people on the bayfront attempted to remove flyers from protesters’ hands, others yelled insults, and some followed them around. Rawls said they will be back again

“We will do this about every month or so in the tourists’ district — just to disrupt — so that disruption can become the norm in St. Augustine until they can become a little more human.”

Shamarria is a reporter for WUFT News who may be contacted by calling 352-392-6397 or emailing news @wuft.org
Previous Tuesday Mornings
Next Tax Deal Between Alachua County And Airbnb Imminent