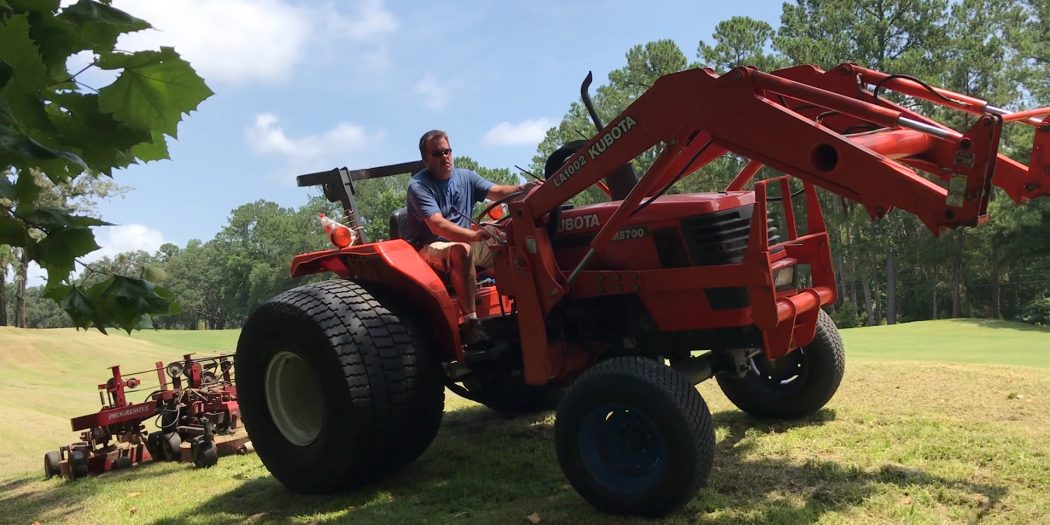 Scott Johnston, 49, of Gainesville, Florida, tends to Meadowbrook's rough on a steamy Thursday, June 20, 2018. The plowing tractor is one of the many pieces of equipment purchased by owner Chris Marcun.

Owner Chris Marcum took over the course about two years ago and, according to Meadowbrook groundskeeper Scott Johnston, recently acquired more than $60,000 worth of water-pumping equipment to deal with future floods.

The course had to close a year ago when water flooded a trio of holes on the back nine, then again following Hurricane Irma’s deluge.

Robert Roberts has called the Meadowbrook community in Gainesville his home for 28 years and remembers both of those floods, plus another bad one back in 2005.

“Before, Meadowbrook would have to wait for Alachua County workers to come and clear floods for us, but now they at least have the resources to handle flood issues themselves,” he said.

Marcum initiated the repair of the course’s irrigation system, purchased the new water pumps, and trimmed many of the trees that were damaged by Hurricane Irma.

Johnston began working as a groundskeeper at Meadowbrook when Marcum took over. The 49-year-old said that the equipment purchased was necessary because the club couldn’t continue to depend solely on the county to deal with floods.

“Meadowbrook’s main pump was down when Chris took over, and now it’s fully equipped with a pipeline system that helps with drainage,” Johnston said. “The new pumps will help prevent severe floods during periods of heavy rainfall.”

Even with the effects of Irma mostly in the past, Gainesville’s weather hasn’t been particularly kind to residents in 2018.

According to the National Weather Service of Jacksonville, this past month marked Alachua County’s fourth wettest May since 1959.

Mike Doctor, a consultant at Meadowbrook, also began working at the course when Marcum took over. The 62-year-old feels the golf club is now better prepared to handle flood issues than ever before.

“Flooding will always be an issue in this area. It’s an unfortunate fact, but it’s reality,” said Doctor. “Our job is now to prevent a serious crisis from happening even before Alachua County’s aid arrives.”

While Meadowbrook has had its fair share of flooding issues in the past, all 18 holes are currently open for play.

The Alachua County Board of County Commissioners in December discussed the flooding of the Meadowbrook area and the nearby Robin Lane homes.

Alachua County Engineer Ramon Gavarrete said county leaders recently approved a stormwater project to cover flooding costs in the area, though the exact funding amount hasn’t yet been determined. Gavarrete said the added funds will help improve the county’s response times if flood warnings continue in the area. He said the county wants to use the funds to repair damaged homes and ruptured street pavements.

Don Wales is a longtime homeowner at Meadowbrook and said he understands the county government can’t always help everyone.

“It would be hard for them to send assistance every time we suffer from poor weather,” Wales said. “It’s Meadowbrook’s responsibility as well to attend to those issues, and (Marcum) has now shown that he has the knowledge, and now the equipment, to do it.”

Edgar is a reporter for WUFT News who can be reached by calling 352-392-6397 or emailing news@wuft.org.
Previous Gainesville Teen Involved In High-Profile Traffic Stop Makes Initial Court Appearance
Next High Sea Adventure Awaits On New Bears And Lions CD