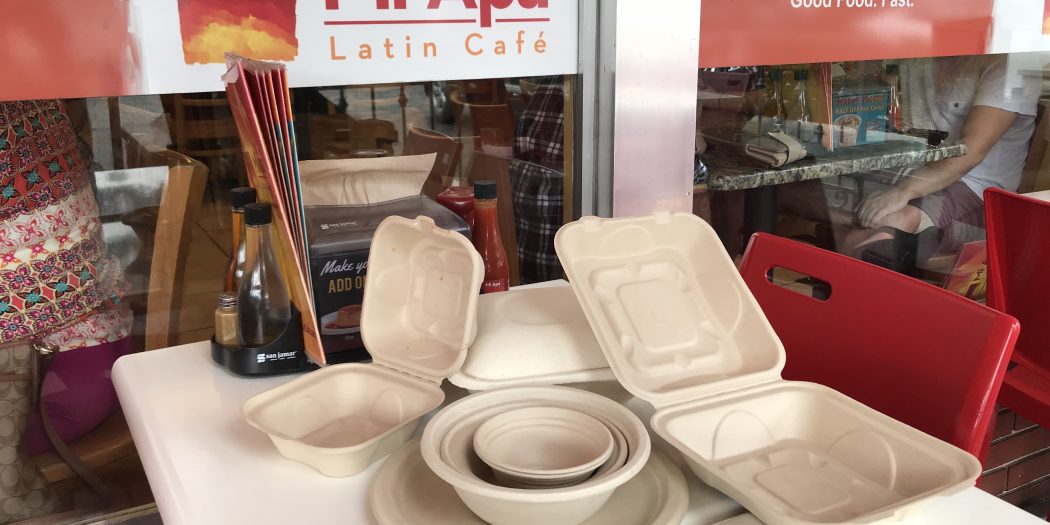 A collection of biodegradable paper to-go plates, bowls and containers that Mi Apa owner Peter Ynigo decided to use for his business. (Joshua Baker/WUFT News)

For Peter Ynigo, owner of two Mi Apa locations in Alachua County, switching to environmentally-safe disposable products has added about $100,000 to his yearly expenses.

“We’re doing it because it’s the right thing to do, and because the customers are demanding it,” Ynigo said.

And yet his Cuban eateries are only 75 percent waste free. Why not 100 percent so? The Wisconsin-based manufacturer that makes the preferred paper plates, bowls and to-go boxes can’t meet the demand of his stores and those of restaurant owners nationwide, he said.

The Gainesville City Commission has adopted an initiative aiming for a 75 percent recycling rate by 2020, 90 percent by 2030 and “zero waste” by 2040. The city will host the second in a series of workshops about the new effort for residents and businesses at 5:30 tonight at City Hall.

Paper, plastic and food waste accounted for 63 percent of municipal waste in the county, according to its last decennial study in 2010. Helping local restaurants – Gainesville’s third largest industry – to reduce food and packaging waste is a priority, officials said.

Vicki Gervickas, grassroots engagement manager for the Gainesville Area Chamber of Commerce, said restaurant owners want any changes they make to benefit the environment. But they also want to keep from hurting their bottom line.

All products leaving the Vine bakery on Main Street in Gainesville are reusable or compostable, except for plastic bags used to keep bread fresh, said its co-owner, Teresa Ramthun.

“It’s not better just for Gainesville,” Ramthun said. “It’s better for the world.”

Michael Fiorillo, owner of the Grand Cafe on University Avenue, said his business uses washable plates and silverware, but still relies on foam and plastic for takeout orders.

“We can’t control where it goes when it leaves here,” Fiorillo said.

City Commissioner Adrian Hayes-Santos said that the tentative 2018-19 municipal budget includes a plan to split with the county the cost of a strategic plan for the zero-waste policy and a waste composition study. These would cost the city $50,000 and $20,000, respectively, he said.

The $85,000 cost for a new city sustainability manager is also budgeted, Hayes-Santos said.

Joshua is a reporter for WUFT News who can be reached by calling 352-392-6397 or emailing news@wuft.org.
Previous Micanopy Farm Seeks Foster Homes For Horses
Next Which North Central Florida Lawmakers’ 2018 Bills Are Now Law?