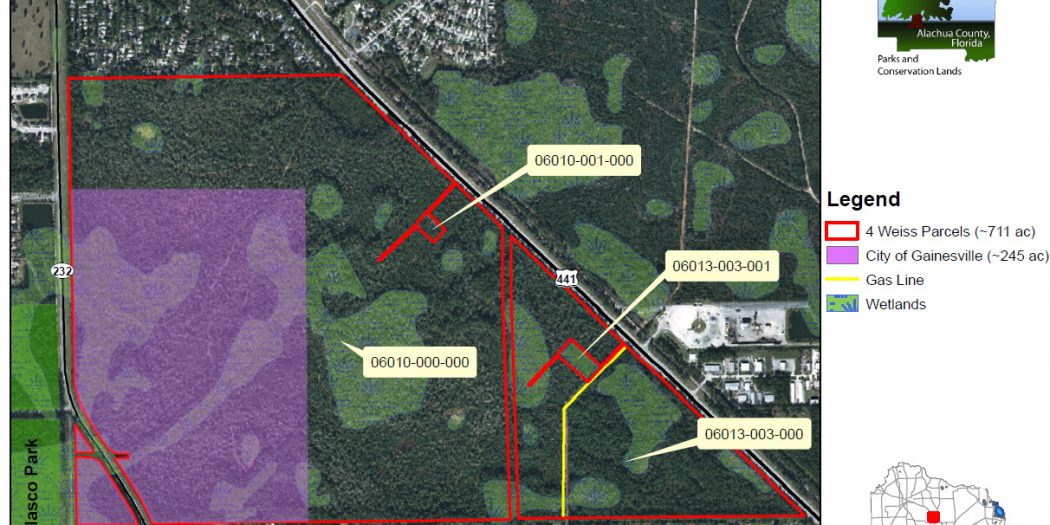 A map shows the boundaries of the 700-acre Weiss property in north Gainesville. (Courtesy of Alachua County)

Alachua County, Gainesville To Decide on $4.4M Purchase Of 700 Acres

What was once to be a 700-acre planned development on Gainesville’s northern edge will likely soon be a conservation and parks area.

During the next 10 days, the Alachua County Commission and Gainesville City Commission will each take a vote to purchase what’s known as the Weiss property for about $4.4 million using Wild Spaces Public Places tax revenue.

Voters approved the half-cent Wild Spaces Public Places tax in 2016. The failed development history of the Weiss property goes back much further.

Its owner, Arthur Weiss, purchased it in the late 1970s. He’s a Boca Raton-based investor and developer who then tried during the late 1990s and early 2000s to build hundreds of commercial and residential buildings on the land. A large portion of it is wetlands, which was part of the reason the city commission in October 2000 voted down his proposed “Greenways of Gainesville” idea.

It remains mostly woods and swamp, with a gas line cutting north to south near its eastern edge along U.S. 441. The county and city will jointly purchase the land, with Alachua County paying $2.9 million for 467 acres and Gainesville contributing $1.5 million for 245 acres.

What will the governments do with it once they own the land?

They haven’t yet decided, but most likely it will be a conservation area with trails. A year ago, only former city commissioners Harvey Budd and Charles Goston expressed misgivings at making all 700 acres off-limits for housing construction. They were voted out of office earlier this year, with commissioner Gail Johnson replacing Budd; Johnson listed environmental protection of the Weiss property as one of her campaign promises.

To the land’s north is the Turkey Creek Forest neighborhood, where Gail Dewsbury lives. Last week, she emailed county commissioner Ken Cornell to convey her hope that the woods remain woods.

“I have been involved in this preservation effort since 2014 and am so happy that it has finally reached this point,” she wrote. “I want to do anything necessary to conserve this wetland.”

Charlie Houder, the county parks director, wrote in response: “The Weiss property is at the headwaters of four different creeks (Turkey Creek, Blues Creek, Possum Creek and Hogtown Creek), so protecting the wetlands and streams is paramount.”

Today, Arthur Weiss is 94. His memory is failing, according to his wife of 10 years, Sandra, who is 72. In April, it was she who signed the $4.4 million purchase contract with the city and county; she said her attorney asked that she not comment publicly on the sale until both commissions finalize it.

At the same June 2017 meeting when Budd and Goston opposed conserving all 700 acres, city commissioner David Arreola summarized the significance of the public purchase.

“I think it’s pretty obvious that the acquisition of this land would be monumental for the city of Gainesville,” Arreola said. “Regardless of what we ultimately decide to do with the portion of land that is actually usable… most of it will be for conservation.”

Alachua County commissioners are scheduled to vote Tuesday at 5:30 p.m., and Gainesville commissioners will likely decide at their June 21 meeting.

Ethan is a journalist at WUFT News. He's a Pennsylvania native who found a home reporting Florida's stories. Reach him by emailing emagoc@wuft.org or calling 352-294-1525.
Previous June 11, 2018: News In 90
Next News in 90: Walk-Off Sends Florida to College World Series