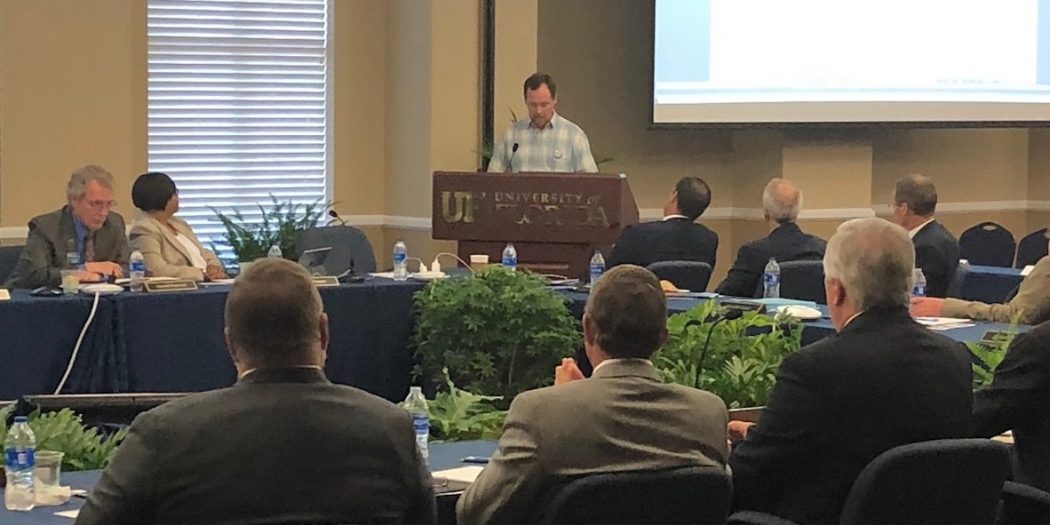 Jason Fults, 42, speaks to the UF Board of Trustees about his experience as an OPS worker 10 years ago. (Madison Rubert/WUFT News)

While University of Florida students and faculty enjoyed Thanksgiving break 10 years ago, Jason Fults, then a program coordinator at the UF Office of Sustainability, worked alone in his Tigert Hall office because he couldn’t afford any unpaid time off.

“After 10 months it became clear to me that continuing to work for the university may be a poor life decision, and so I moved on,” Fults, 42, told the UF Board of Trustees on Thursday.

Fults is now co-chair of the Alachua County Labor Coalition, which brought 25 supporters to Emerson Alumni Hall to advocate on behalf of OPS, or other personal service, employees at UF.

While noting a lack of wage increases, and seeking greater Social Security contributions and paid leave, the OPS employees’ main complaint was being treated as temporary workers despite working full time.

“We’re not asking for the moon here,” Fults said. “But I certainly think they deserve it, and much more.”

Fults, who worked at UF for 10 months in 2008, called on the trustees to increase pay for OPS workers, a day after the university increased its minimum wage from $12 to $13 per hour for salaried staff and permanent non-salaried staff, beginning in July.

According to a coalition document that Fults handed out at the meeting, there are thousands of workers in a total of 56 job titles who are classified under other personal services at UF.

“I think they’re entitled to the same benefits as any other worker,” Fults said. “OPS workers are just as valuable and deserving as everyone else and should be treated the same.”

Cornell urged the board to pay them equal to full-time staff.

UF President Kent Fuchs said in an interview afterward that there has been much discussion the past year about the role of OPS employees on campus. He said the university is reviewing all long-term OPS positions to determine why they have been working full time for so long.

“It takes time,” Fuchs said of the evaluation, while also noting it would be detrimental to many people if the university found itself unable to keep a sizable number of OPS employees.

“All the people would lose their jobs, and so we can’t make a mandate like that,” he said.

Nathan Loher, 26, said before the meeting that he began conducting phone surveys for the university’s economics research bureau last week. Loher said he came to protest the mistreatment of workers and their inability to form collective bargaining units.

“This not only harms the OPS workers,” he said. “It harms UF’s character.”

Community organizer Faye Williams stormed out of the meeting when she was denied the chance to speak, despite sending the board two emails to participate in the discussion.

“I’m very angry about the fact UF would increase income for tenured faculty and staff, and then continue to ignore the OPS workers,” Williams, 62, said. “That’s not right.”

UF Student Body President Ian Green, who is pursuing a master’s degree in international business, said he believes the trustees will do what’s necessary to help all parties involved.

“What’s so great about the University of Florida is that people have a platform to voice their concerns,” Green, 22, said. “It’s really important that we stay as one cohesive community.”

Madison is a reporter for WUFT News who can be reached by calling 352-392-6397 or emailing news@wuft.org.
Previous SWAG Reveals The CHILD Center For Early Learning
Next GPD Investigating Robbery of 24 Firearms From Creekwood Apartments