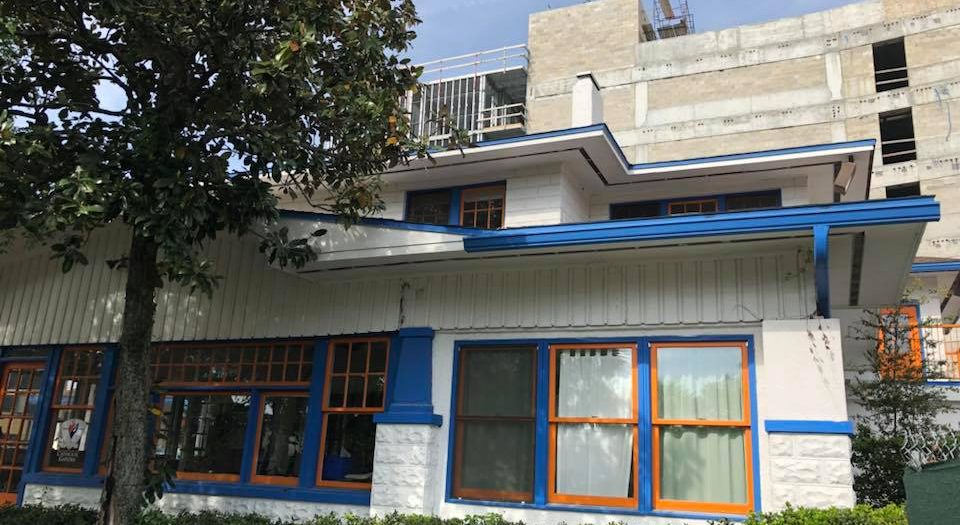 The Hurley House is shadowed by the new construction of Midtown Apartments. The Catholic Gators facility is located at NW First Ave. and NW 17th St. in Gainesville. (WUFT News / Spencer Reed)

The Catholic Gators are preparing for a new home this summer as they say goodbye to Hurley House and anticipate ground breaking for a new student activity center.

Located on the northwest corner of NW First Ave. and NW 17th St., the nearly 100-year-old house has served as the “home base” for the Catholic Campus Ministry at the University of Florida since 2012, according to the Rev. David Ruchinski.

The decision to move came about when The St. Augustine Catholic Church provided land for the new Midtown Apartments to be built on the current site of the Hurley House.  As a result, the student ministry decided to demolish the building and construct a new student activity center.  Ruchinksi said the new center will move to the southwest corner of the block and be about 50 percent larger than the current Hurley House.

Named after the former Archbishop of Florida, Joseph Hurley, the Hurley House offers members of the Catholic Gators a place to study, attend Bible studies and a place to hang out with other members of the student ministry.

Although original house dates back to the 1920s, it is not part of any historical registry. It has been renovated numerous times and was added onto in 2000.

Ruchinski said members of the Catholic Gators have mixed emotions about their future home.

“I like the homeyness of being in an old house,” Ruchinksi said. “But at the same time, there is a lot of maintenance and upkeep that comes with being in such an old house.”

Members of the Catholic Gators have called the Hurley House a second home throughout their time at UF.

“People are sentimental because there are a lot of good memories attached to it,” said senior public relations student Elena Castello. “But it’s also great that we’re getting a new space.”

The date for demolition and construction of the new house is in the hands of the Roger Development Group and Sauer Inc., the developers and contractors working on the Midtown Apartment complex. The Catholic Gators and St. Augustine Catholic Church are hopeful that ground will be broken by the end of the summer.

“It’s not clear when we’re going to be able to start the demolition,” said Ron Marsteller, superintendent of Sauer Inc. “It could be one month and it could be three months.”

Despite the impending demolition, the Catholic Gators will never be without a student center.

According to Ruchinski, the St. Augustine Catholic Church and Roger Development Group reached an agreement that the development group must provide a new or temporary location for the center to move before they demolish the Hurley House.

“Depending on how the construction schedule works out, we are planning on having some type of farewell to the Hurley House,” Ruchinski said. “We’ll be inviting our current members of the Catholic Gators, as well as alumni, to come say their farewells before it’s torn down.”

Spencer is a reporter for WUFT News who can be reached by calling 352-392-6397 or emailing news@wuft.org.
Previous The Conflicting Educations Of Sam Schimmel
Next May 30, 2018: News in 90