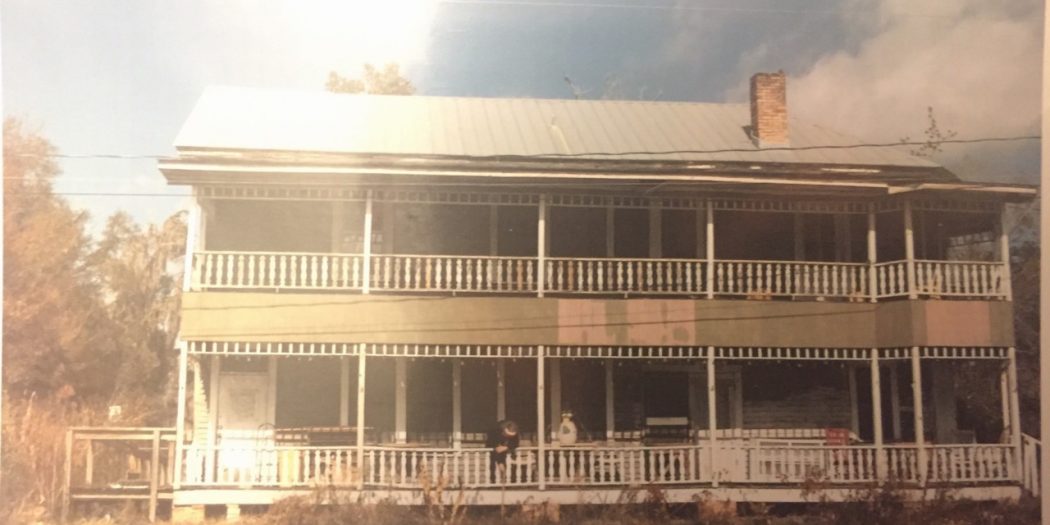 The House of Entenza Cigar Factory was built in 1881. It is now the home of Lucy and Bobby Cook. (Courtesy of Waldo Area Historical Society)

A former University of Florida English professor will publish a 300-page book on the history of Waldo and its people this fall.

Kevin McCarthy, who has published 65 books, many about Florida’s history, said the theme of the book, “History of Waldo,” is about how the city adjusted to change such as the railroad boom that brought an opera house and cigar factory and the closing of Waldo Community School in 2015.

“The railroad is really what put Waldo on the map in the 1850s, and when the railroad stopped, the people of Waldo had to adapt, and they did,” he said.

The Waldo Area Historical Society first came to McCarthy with the idea for the book six months ago. They have been recording interviews, collecting documents and searching for Waldo memorabilia since 2005, said Penny Dodd, the society’s treasurer. Dodd bought a home on her street, where the society stores residents’ historical donations like the green gown resident Betty Brooker wore to President Jimmy Carter’s inauguration and a pamphlet titled “Home Cooking Secrets of Waldo.”

“It’s overflowing,” Dodd said of the house. “You can’t even make it nice-looking because there is so much. Like they say ‘bursting at the seam.’”

Donations are still accepted even though the space is full.

McCarthy said the society’s large collection of Waldo artifacts made the project more engaging. He has gathered photos from Florida historical archives in Tallahassee and reviewed the documents and interviews compiled by the historical society.

“It’s been a fun project for them, and also for me,” he said. “I’ve lived in this area for 50 years, and I’m still learning about it.”

In February, he started visiting Waldo once every two weeks to collect information and interviews.

On Tuesday, he met a former newspaper columnist who wrote about the town and a woman who works as a hairdresser.

During an April 14 visit, when he met Tom Wasdin, who told McCarthy he set the statewide record for most points scored on an outdoor basketball court when he was a guard for the Waldo High School team in 1952. Wasdin later became a basketball coach at Jacksonville University and took his team the national tournaments three years in a row.

McCarthy said it is important to collect stories for future generations now before residents die.

“This is going to become valuable as time goes on because — maybe a hundred years from now — people will do research into their roots and will be interested to know what Waldo was like,” he said.

Dodd, who is the treasurer of the society, said the goal is to account for a complete history of Waldo from the 1800s to now.

“There’s so much history here in Waldo that we really need to get this documented,” she said.

McCarthy said he first learned about the Alto Canal that connected trade between Melrose and Waldo when he was writing a book about Melrose. He said his book describes how economically prosperous the city became from the transportation of goods and people from the canal’s steamboats to the railroad station located downtown.

“Once a product reached Waldo, it was loaded on a train and sent all over the nation,” he said.

Linda Vlacos, the secretary of the historical society, said the economic boom made Waldo one of the first major cities in the area.

“Waldo is one of the oldest cities in Alachua County, and it used to be a booming town, so it’s got a lot of history,” she said.

Dodd said the book describes the extravagant lives of the Waldo visitors. Women, wearing beautiful gowns, would get off the steamboats on the canal and visit Waldo’s opera house. The opera house is no longer there.

Kim Worley, Waldo’s city manager, said the city is now working to bring back the food, music, and fun it was known for during that era.

“Back in the day, Waldo was the playground of the area,” she said. “All of that would be so cool to bring back.”

The society keeps its railroad memorabilia, including uniforms and tools used to build the railroad, in a red caboose on Waldo Road. The caboose was acquired by the city in 1986.

The group has also collected photos and stories of The House of Entenza Cigar Factory, also known as the El Toney Cigar Factory, built in 1881 and now the home of Lucy and Bobby Cook. Bobby paints sayings on a white sign on Waldo Road next to the house every month.

“Dig the well before you’re thirsty,” it read early this summer.

Dodd said Mr. Entenza, who owned the factory, would allow the women he employed to roll cigars to bring their children to work. He would hire someone to read the children.

McCarthy said education was important throughout the history of Waldo. Accomplishments of residents like Wasdin, who had a 15-year career as a coach, exemplifies how the people learned lessons from their small community, he said.

“(Wasdin) learned a lot of the traits of being a successful person from growing up in Waldo,” McCarthy said.

His uncle and aunt raised him on their chicken farm outside of Waldo.

“We were poor, not real poor, but we didn’t know it,” he said. “We had food, clothes and a lot of love in the family. It felt like I had a silver spoon in my mouth.”

He said the town raised him. Once, when he got in trouble with the school principal for shooting spitballs at a guest speaker, his uncle already knew about it when he got home.

Their farm didn’t have electricity or plumbing, but Wasdin’s uncle later bought a home with a television and toilet on U.S. 301 when Wasdin was in junior high school. When he watched the black-and-white screen at the new house, he saw there was more outside of Waldo, Wasdin said.

“I started seeing the world, and I thought there had to be something I’d rather do than working on a farm,” he said.

He went to the University of Florida and completed his bachelor’s and master’s degrees in physical education, health and recreation in 1963.

Another resident, author Ben Campen, wrote books called “Waldo Wisdom” about what traits, such as getting along with others, he took with him into his careers in the armed services and flea market business.

“Some commonalities (of successful Waldo residents) are getting a long with a wide diversity of people in a small school, learning how to compete, realizing the importance of education,” he said. “Many graduates of the Waldo school went onto college and universities.”

The Waldo Community School, which was built in 1922, was shut down in 2015 due to budgetary reasons, but there are plans to reopen it as a charter.

The book also tells the story of Waldo’s schools from the first record of black and white schools in 1887. The Waldo Community Center, built in 1955, used to be the black school’s cafeteria.

“The African American and white communities have worked together well, better than other places in this county,” he said. “I don’t know why that is.”

Vlacos writes down what her parents tell her about growing up.

“These kind of things are interesting,” she said. “These people that talk to us tell us why they came, what they did, how they lived.”

The book will include lists of all the veterans, mayors, police chiefs and other key figures in the town, McCarthy said.

The last book written about Waldo was “East side of Eden” published in 1976, Dobb said. The book has limited copies and is hard to come by.

“It’s just time for an update,” she said.

McCarthy has promised all profits from the book will be given to the society, which is a non-profit. Dodd said they need funding to move their collection to a larger space that the public can access, like a museum.

The society raises money with a spaghetti dinner every September and a monthly newsletter, which costs $12 a year to subscribe to. They usually make about $1,000 each time they host a dinner.

McCarthy said the books will cost between $10 and $15 each.

Vlacos organizes documents and conducts research twice a week for the book. She said she looks forward to giving Waldo a piece of its history back.

“I hate to say it, because I love Waldo, it’s a great place to live, but it’s run down,” she said. “It’s like it’s a ghost town almost. We just figured we need to do something to help.”

Meryl is a reporter for WUFT News who can be reached by calling 352-392-6397 or emailing news@wuft.org.
Previous Cade Museum Opens In Gainesville As Hub For Invention
Next May 22: News in 90