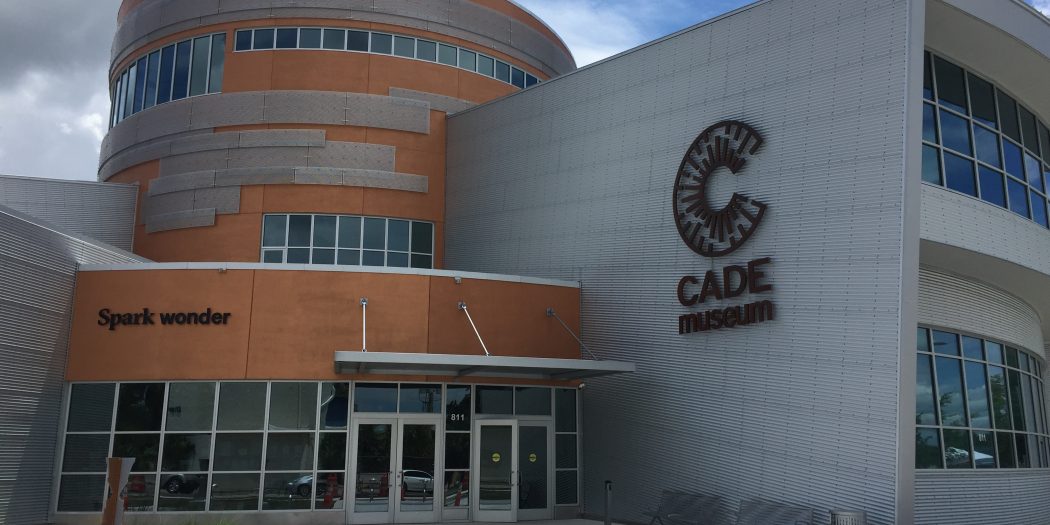 The Cade Museum on South Main Street in Gainesville is now open to the public. (Dennis Johnson/WUFT News)

Cade Museum Opens In Gainesville As Hub For Invention

The revitalization of downtown Gainesville continued on Saturday with the grand opening of The Cade Museum for Creativity and Invention.

Some 100 visitors took to exploring the 26,000-square-foot intellectual oasis on its inaugural morning.

Dan Randall brought his son Byron to the museum, and says that he’s been waiting a long time for it to open. The two were watching intently as Andrew Belz pulled down the lever on a 160-year-old Gutenberg printing press, producing a print. Byron got a chance to pull the lever himself.

“We’ll be spending a lot more time here. We’ll probably become members,” Randall said. Belz, whose family gifted the press to the museum, said he’s had a close relationship with the Cade family for many years.

The museum is the result of 13 years of fundraising and $9.2 million on the part of the Cade Museum Foundation. The foundation carries on the philanthropic and scientific legacy of the late Gatorade inventor and UF medical professor, Dr. Robert Cade. The two-story building is impressive in scope and design. It features windows that bathe the interior in light, and details around every corner inspired by the Fibonacci sequence. Bordering the walls on the second floor are large multicolored plaques honoring inventors such as Nikola Tesla, and the man who invented the zipper.

“Our tagline is ‘spark wonder, invent possible,’ and I think we want people to come in, be curious and to walk out having learned something new or been inspired by something,” Stephanie Bailes, the museum’s executive director, said.

The museum seems to appeal to a variety of ages; children created fluorescent colored slime in the museum’s laboratory, while adults were hearing about the latest advancements in the use of antibodies to combat cancer from expert Dr. Gerry Shaw. A new inventor from fields as diverse as business, science, and medicine will debut at the museum every Saturday.

And then, there’s the Gatorade exhibit. The exhibit tells the story of the drink’s founding and its impact on UF, as well as the sports world as a whole.

“Our whole goal here is to help people find an inventive mindset. So maybe they don’t need to become a scientist or a researcher, but now that they’ve been sparked by going through the Cade museum they can eventually leave with that mindset and feel like, ‘maybe I can create something, or maybe I can do this,’ just changing their perspective,” Elizabeth Gist, the museum’s inventor coordinator, said.

Dennis is a reporter for WUFT News and can be contacted by calling 352-392-6397 or emailing news@wuft.org.
Previous Florida Voices | Naomi Glaser, Still Here
Next Waldo’s History Chronicled In New Book