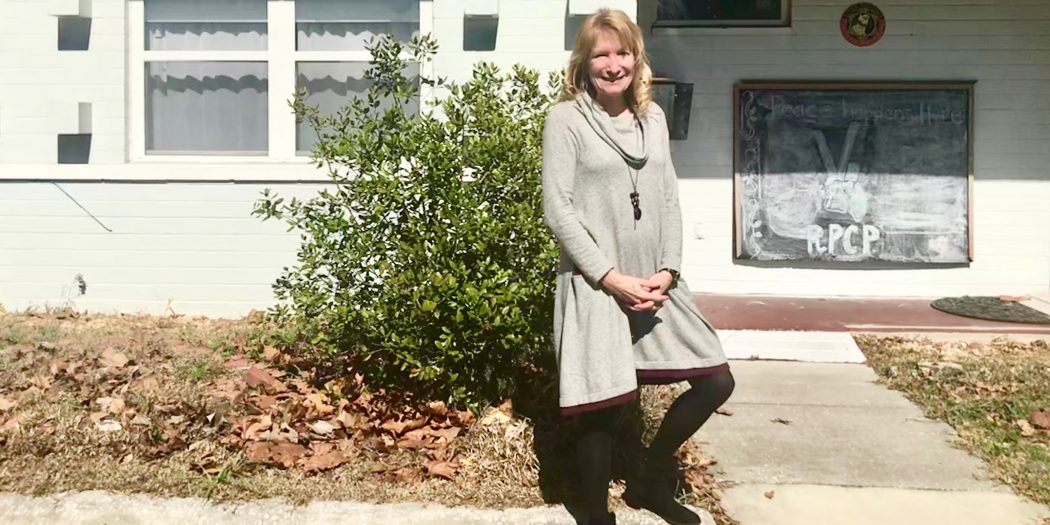 Gretchen Casey stands outside of the River Phoenix Center for Peacebuilding, where she works during the day. (Brooke Henderson/WUFT News)

A stranger broke into her apartment, tied her down, and gagged and raped her at knifepoint.

“I felt enormous shame for not being able to protect myself,” said Gretchen Casey, a longtime sexual assault victim’s advocate in north central Florida.

In 1984, Casey became the third of four people raped by a man who would be later be sent to prison for those attacks. When she told people what happened in the months and years afterward, their reactions made her feel ashamed for different reasons, she said.

“I recognized that shame places a hundred percent of the responsibility for someone else’s behavior that was directed at you, on you,” she said. “I just don’t think that’s fair.”

In 2014, Casey, 57, outreach and advocacy director at River Phoenix Center for Peacebuilding, founded the Unshame campaign in Gainesville to support rape victims around the world.

Over 1,000 people follow the Unshame group page on Facebook. The platform provides resources for healing, positive messages and information about local events – all designed to enable victims to move past shame and redefine themselves as survivors.

Through Unshame, Casey also conducts restorative justice circles, which are meetings in which a victim meets her or his attacker in a structured setting. The goal is to give both sides closure.

Elle Wayne, 31, of Gainesville, has followed Unshame since its launch. Calling herself a victim of intimate-partner violence, Wayne said many groups devoted to victims have flowery names, but the path to recovery isn’t pretty or easy. Unshame gives power back to the victim, she said.

“I like that the name kind of is instructing people, ‘Hey, you’re not going to pass the blame here” from attacker to victim, Wayne said. With embracement as a goal, she added, “You’re not only going to not shame the victim, you’re going to Unshame them.”

Because others still adore her abuser despite what she says he did to her and other women, Wayne said she often must remind herself that it is not her shame to bear.

Carolyn Cleveland, 53, of Gainesville, calls Casey her hero. With Unshame’s help, Cleveland said she stopped hating her perpetrator and thinking she was at fault for being molested.

“She’s changed the very core of the person I am,” Cleveland said. “Gretchen has freed me in so many different ways in my life. Kindness really does change the way we see the world.”

Casey has experience working with victims through the State Attorney’s Office in Gainesville. Bright, teal pins litter her office. In white letters, they read “#MeToo.”

The University of Florida alumna is a huge advocate for the recent #MeToo movement. But Casey said people for whom the hashtag applies represent only a fraction of survivors.

“Even though there were over 6 million people that posted #MeToo, that was probably only the tip of the iceberg,” she said.

With so many coming forward, Casey said there is an even greater need for restorative justice circles. They allow victims and offenders to discuss their encounters with the help of a facilitator. Sometimes, the attacker shakes with nerves, realizing for the first time the victim has a face, Casey said. Sometimes, the victims don’t want their attackers jailed – only answers.

In a recent survey shared on the Unshame Facebook page, nearly 90 percent of victims who responded said they would have wanted a restorative justice circle if they had known about it.

“If you don’t know how you have harmed someone, what’s to stop you from doing the harmful behavior over and over again?” Casey said.

Casey never got to talk to her attacker. He once had agreed to do so, but then rejected the idea, she said.

In 2016, she came up with an alternative. Her life partner, Kevin Robinson, gave her a book titled “How to Write a Screenplay in 21 Days.” It took her 21 hours to write her own first draft.

Her screenplay, “Somewhere Beyond,” allowed Casey to have the meeting she wanted.

These are just a few of her questions: What happened to you that made it possible for you to think that this was OK? Did you not know this was hurting people? Why did you pick me?

“Being able to contact and provide a little piece of mind, a few soulful words to victims or survivors of any kind of pain, I think it means the world to Gretchen,” he said.

Brooke is a reporter for WUFT News who can be reached by calling 352-392-6397 or emailing news@wuft.org.
Previous ‘In God We Trust’ To Be Displayed In Public Schools
Next Florida Voices | Stella’s Story, One Special Pig