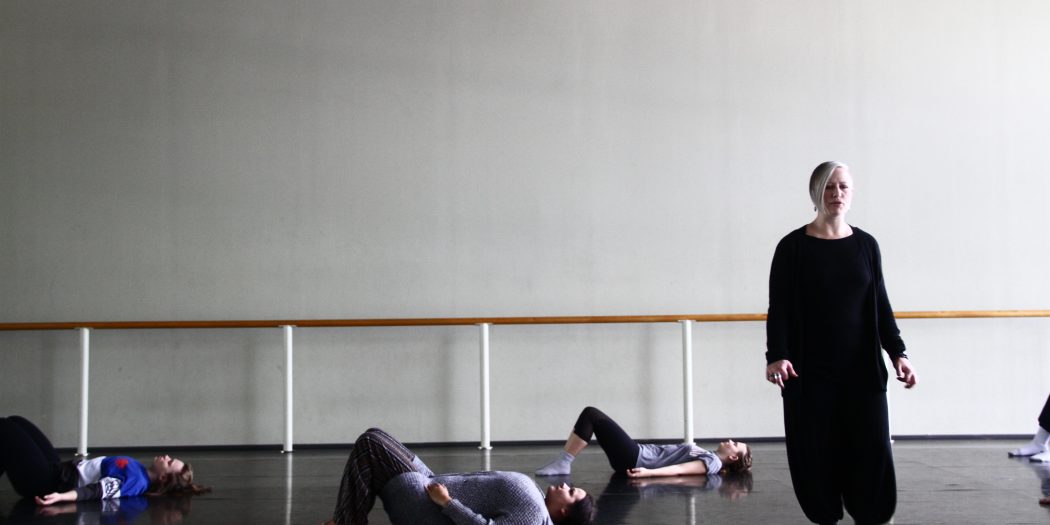 Before coming to the University of Florida, Alex Murphy had never taken a dance lesson.

He enrolled in a basic ballet class as a sophomore and struggled. Murphy said he had trouble adapting to the strict ballet technique and understanding dance fundamentals.

Two years later, Murphy is now a dance major and plans to graduate next fall. He said a pivotal person who helped make a dancing career achievable is his first dance teacher, Elizabeth Johnson.

In basic ballet, Johnson broke down ballet’s rigid language for Murphy into easy to grasp terms, like explaining how heels and hips work together to achieve perfect ballet posture.

“She’s kind of helped me realize what dance is and think more in depth about technique,” the 21-year-old said, “and how to apply that to my own body.”

Johnson, 49, became a dance professor at UF in the fall of 2016. Though she’s been with the university for a short time, students and colleagues agree that Johnson is a trusted and committed teacher.

Her office in the School of Theatre and Dance building is clean and sleek, lit only by two dim lamps. Her desk and walls are mostly empty, with a few picture frames and notepads scattered throughout.

Beneath a purple “My Little Pony” plush doll is a cabinet stocked with healthy snacks like almonds and crackers; she’s trying to watch her blood sugar.

“Sometimes I have to choose between sleep and food,” Johnson said. “I usually choose sleep.”

With swooping light blond hair and soft but determined eyes, Johnson has the posture of a prima ballerina but the demeanor of a familiar, inviting friend.

A plethora of projects have her attention, but Johnson remains laser focused in her mission to broaden the minds of dancers.

She joined in when it was time to gently rise from the ground and stretch. Johnson casually held a handstand against the mirror, stretched her legs into a straddle, came down to the ground and took a sip of coffee.

When teaching, Johnson, whom many students call “Lizzie,” is playful but precise. A student attempted a new stretch Johnson introduced and let out a quiet, “Oh, Jesus.”

When students struggle, she breaks down movements and describes what each body part should be doing. When students do well, they get, “Isn’t that super fun?”

The teaching style Johnson developed came from what she cherished and lacked from her own instructors.

Johnson joined the North Carolina School of the Arts at 15. She said the conservatory dance training she received there was brutal and emotionally abusive.

Often, instructors’ qualifications came in experience dancing, not teaching. This meant they didn’t explain techniques and movements, they just demanded them to be correct.

“The teacher is the conveyor of knowledge, and that knowledge is not to be questioned,” Johnson said. “You just try to do your best to understand even if they’re not a clear communicator.”

Johnson enrolled at George Mason University with this mindset and said she was shocked by the open-minded environment and creative approaches to dance she experienced.

She discovered new methods to choreography, was exposed to different culture’s dance styles and studied anatomy.

She became so invested in dance’s relationship to the body that she became a certified teacher of the “Alexander Technique” and a certified “Laban Movement” Analysist, two educational processes and methodologies that describe, visualize and interpret human movement.

Trent D. Williams Jr., a UF dance professor, was on the search committee that hired Johnson. He said the college is in desperate need of a dance kinesiology, study of body mechanics, program, and Johnson’s expertise in the area made her stand out from other applicants.

“She is definitely a person who has a great wealth of knowledge about the body, and she really gives that to her students,” he said. “I think all emerging choreographers, dancers, pre-professional dancers should have a sense of knowing themselves, as well as their bodies.”

As a university dance professor, Johnson takes the discipline and specificity of conservatory teaching and mixes it with the improvisation skills she mastered in university dance.

Back in her modern class, Johnson played U2 and Rihanna as students repeated choreography.

One sequence involved twisting the lower and upper halves of the body to sit up from the floor, a deceivingly complex move Johnson performed in one fluid motion.

Her students, on the other hand, struggled and laughed at themselves. Johnson told them the principles of the move are used constantly in their choreography, which she wanted to improve.

“Instead of just doing it, I want you to understand what your choices are,” she said.

“I want more. I want more from your thinking, from your creativity,” she said. “I’m giving you the tools to which you can recognize what you’re doing.”

Advanced modern is Murphy’s sixth class with Johnson, and he said classes with her often feel like collaborative experiences.

“She introduces the concepts with the phrases, we do it, then we talk about it to make corrections upon our own body,” he said. “Then we apply those corrections based off of what’s she’s given us or what we notice in our body.”

Johnson doesn’t reserve her attentive nature for classes; it’s a part of who she is.

Empathy is a central characteristic of Johnson’s. She keeps a handful of cards from the UF Counseling and Wellness Center in her backpack and gives them to students.

And when she saw the first pictures of Syrian refugees fleeing their country, she choreographed a dance in the hopes of bringing awareness to their hardships.

Johnson said as she gets older she’s trying to direct some of her empathy and care toward herself and focus on things that bring her joy.

Those joyful things sometimes stray far from dance. She loves pop culture, poetry and late ‘70s rock ‘n’ roll, which she believes is some of the last great rock music. Queen, Led Zeppelin and Heart are favorites.

Her husband is director of the University of Utah’s School of Dance and lives in the state. They’ve been married for 14 years, spend summers together and visit when they can.

Also, her three children are in their 20s and in college. Her two youngest, 22 and 20, are pursuing careers in the arts, and she insists her oldest, a 24-year-old law student, is a terrific dancer.

A mentor once told Johnson that she treats her dances like her children, and sometimes she just needs to put them to bed.

“And I thought, ‘OK, so that’s how she treats her children. How do I treat my children?’” Johnson said.

Unsurprisingly, Johnson treats her dances with the same nurturing, understanding and excitement she seems to use in all aspects of her life.

Grace is a reporter for WUFT News and can be contacted by calling 772-708-5532 or emailing graceokenny@gmail.com.
@gracekenny11
Previous Tiny Beds, Big Impact
Next Gigi Simmons Beats Incumbent Charles Goston in District 1 Runoff