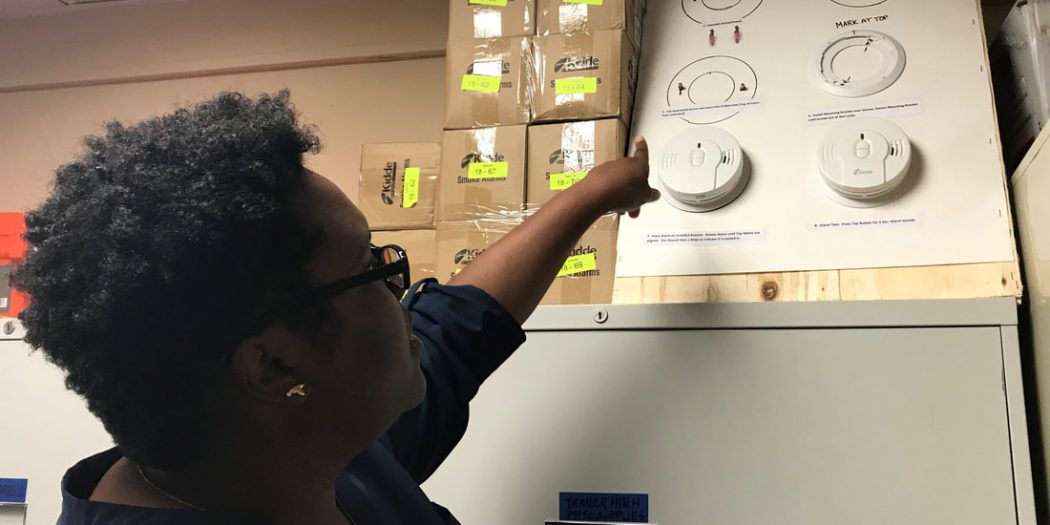 During a 12-hour period in October, Gainesville Fire Rescue responded to three separate fires with one common denominator: No working smoke alarms were found inside the homes.

One person was seriously injured and all three dwellings – two single-family houses and condominium – were damaged, according to the fire department, which said a home sprinkler system and smoke alarms could have minimized the harm.

Fire safety officials and advocates are working toward funding programs aimed at soon putting smoke alarms in as many as 150 homes across Gainesville.

Saturday, the American Red Cross will begin a two-week home fire safety campaign that would have 100,000 detectors installed across the country.

The organization will focus its northeast Florida efforts via a “Sound the Alarm” initiative in Jacksonville, said its regional communication director, Amber Bierfreund.

The National Fire Protection Association recommends that the average home have five alarms that cost about $20 each. For the 36 percent of residents who live below the poverty line in Gainesville, that can add up creating more requests than the city can handle.

According to the Gainesville fire department, about one-third of the 41 single-family home fires battled between 2013 and 2015 did not have a working smoke alarm.

“A lot of the new (recommendations from the National Fire Protection Association) say that you have a have 10-year battery as opposed to the standard throw-away batteries, which makes the alarms more expensive,” Assistant Fire Chief Michael Cowart said. “It’s about triple the cost.”

The department has provided low-income families with free detectors, funded by the state as well as private contributors, for about a decade. However, the program named “Project Get Alarmed” does not have enough supply to meet the demand without taking away money for improvements for fire trucks and stations, Cowart said.

The department is seeking is seeking $12,000 from the federal government to buy 610 standard smoke detectors for local dwellings, plus $5,800 for alarms for residents who are deaf, hard of hearing, and the blind, and $6,480 for carbon monoxide detectors, according to District Chief David McIntire. It also hopes to be awarded another $64,165 toward better marketing a home sprinkler campaign, and installing a software package that would track statistics in real time for improved safety mapping, McIntire said. The grant application is still pending, the fire officials said.

In 2014, the national Red Cross began its effort to reduce home fire-related deaths and injuries by 25 percent by 2020. In October, the program gave away its one-millionth smoke alarm, said Bianca Esprit, the Gainesville Red Cross’ disaster program manager.

Often, a Red Cross volunteer will visit a house needing a detector with a fire department representative for an installation and education session, Esprit said. Ideally, the family is required to make a fire safety plan, which includes doing escape drills.

“There are tips that you would think are common sense, but people become lackadaisical,” Esprit said. “Like no smoking in bed or don’t plug a large appliance into a power strip.”

For Esprit, who started as a Red Cross volunteer and has done installations across the state, there is a large sense of relief after an alarm is affixed.

“Most often, I see gratefulness,” she said.

Can Turn Lanes Help Limit The Hundreds Of Traffic Crashes On State Road 121 In Gainesville?

One 4-mile stretch of State Road 121 through Gainesville has had nearly 900 reported car crashes in the past three years.