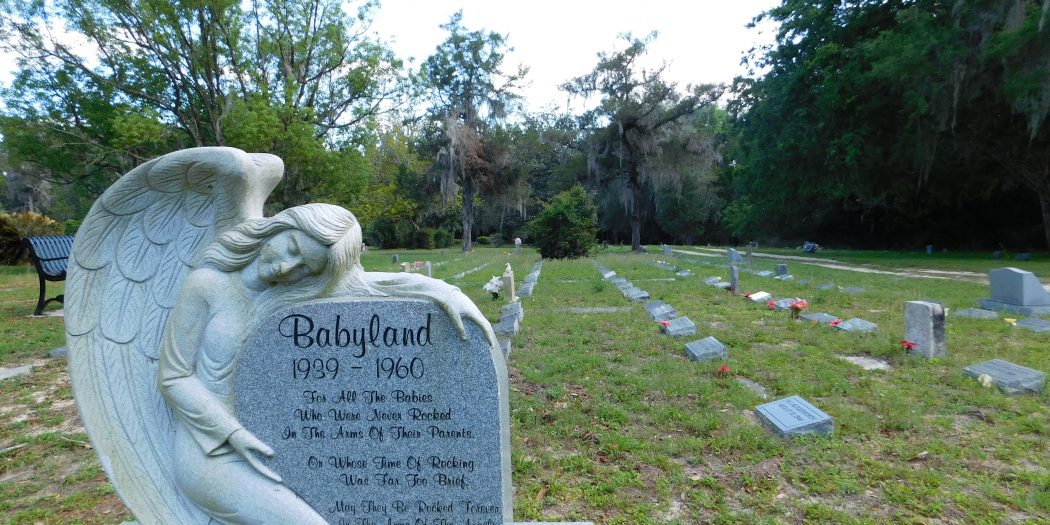 An angel statue overlooks the graves of over 200 infants in Evergreen Cemetery’s Babyland. (Emma Witmer/WUFT News)

Remembering The Forgotten Children Of Babyland

When Mary Blake and her dog Sophie first walked through Evergreen Cemetery, the pair stumbled across something that Blake couldn’t quite get out of her head: seemingly countless infant graves, many of which were buried without a name.

Blake has been biking the Gainesville-Hawthorne State Trail in preparation for a cross-country cycling trip from Chicago to Los Angeles with the all-female bike tour company, WomenTours. On her rides, Blake said she always keeps an eye out for places to walk Sophie. That’s how the two found themselves at 401 SE 21st Ave. – Evergreen Cemetery – on April 18.

“It made me feel better to have Sophie with me in a place like that, anyway,” Blake said.

What Blake found was a plot of more than 200 graves, each marked by a small headstone. The place is called Babyland.

In a quiet stretch at the very back of the cemetery, these long-since passed babies have been laid together in neat, uniform rows.

In the past, families would often come to Evergreen Cemetery with no money, but in need of a place to lay their infants to rest. Between 1936 and 1960, more than 200 infants were buried in the cemetery, often at no cost to the family, said Evergreen Cemetery president and historian Burton J. “Jimi” Brown.

“If there’s families who had spaces, their children, if they lost an infant, would have been buried in their family space,” said Brown. “However, the general population couldn’t afford it. That’s what Babyland was provided for.”

Most of the headstones in the lot look quite the same: 8-inch by 16-inch granite slabs. Many of these engraved stones were paid for by the cemetery with community donations as part of a 2016 renewal initiative.

Few of the children lived more than a day, so their markers only bare one date. Even fewer were named.

Brown said that what information they could find is on the stones, but that isn’t always much. Some list gender and family name, some simply list a date and “baby doe” when the identity of the child was unclear.

Of the three burial lots designated to Babyland, a full lot is designated to infants who died between 1939 and 1945. While this lot took just six years to become full, Brown said that it took 16 years to fill the next two lots.

The reason for this seemingly high rate of infant deaths between 1939 and 1945 is uncertain. However, Brown notes that the time period lines up perfectly with the span of World War II.

“It very neatly tucks into World War II,” Brown said. “’39 and ’40, of course, the United States was not yet involved in World War II, but war pressure was on. I don’t know if people were just in a state of fear and tension.”

Today, the place is guarded by the statue of an angel and placard bearing the words of High Springs’ Margaret C. Myers:

Emma is a reporter for WUFT News who can be reached by calling 352-392-6397 or emailing news@wuft.org.
Previous Reception For Returning Veterans ‘Far Different’ From 20 Years Ago
Next April 25, 2018: Afternoon News in 90