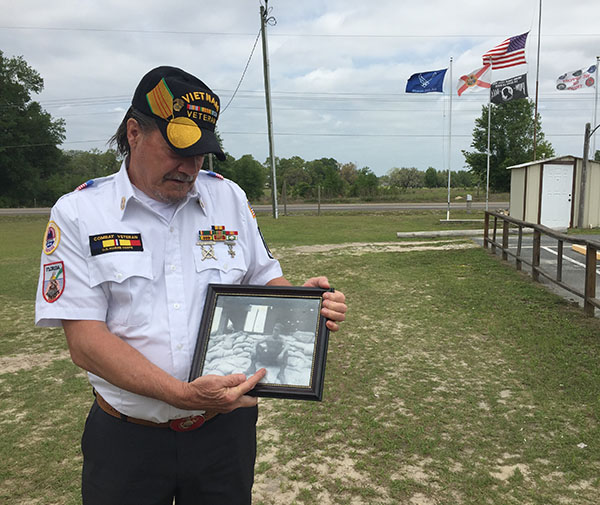 Franklin Tennant shows his only photo of him in Vietnam in 1969. (WUFT News / Visshaael Patel)

Reception For Returning Veterans ‘Far Different’ From 20 Years Ago

Public applause, generous hugs and sincere appreciation greet veterans across the country. But for Franklin Tennant and Dean Richards, times today are far different from what they experienced.

Many who served in Vietnam came back to a country that had turned their backs on them, said Tennant who was with the Marine’s 9th Engineer Battalion. Richards faced a challenging transition with bottled up emotions and mental blocks following his Army deployment in 1989 for Operation Just Cause, the U.S. invasion of Panama.

Yet the two found a sanctuary of support and advice — AMVETS Post 88. Located in Archer at 10050 on Florida State Road 24, the gathering spot has been a place where generations have turned tragic stories into memories for individual progress.

“I found this place and I was comfortable here,” Richards said. “It gave me a reason to pull up my bootstraps and get back in the game, which is a godsend for me.”

Carrying a 14-pound detector in Asia’s monsoon season was no walk on the beach, said Tennant. He said some Vietnam veterans navigated minefields and many others watched friends lose their lives.

Tennant served more than two years and was a lance corporal and second squad leader for his outfit. He remembered the day his friend was killed in a Viet Cong attack, only two months after his fellow soldier returned to Vietnam from a short reunion with his family.

And for Richards, it has been two decades and death is still no stranger. Richards recounted the hardest experience he ever had to do in life: burying a soldier and presenting the flag to his mother.

Tennant said it was an era when people yelled and called him names. It was a feeling that people didn’t care if you got shot or not and, at times, he said he even felt like going back.

“Why stay here if you’re going to get treated this way? Go back to where at least you were living day to day on your own, and you didn’t have any of that in your face,” Tennant said.

Without a smooth transition and genuine conversation, emotions and feelings were bottled up, and Tennant said he “still gets angry” with how veterans were treated. Most times he avoided deep conversations about what happened in Vietnam because he simply didn’t want to have to deal with any of it.

Richards agreed that it was still difficult to open up and get back on your feet. After coming home, he said he avoided close interaction as personal difficulties piled up. He remembered living out of his car, without support and no income.

Tennant noted that today’s generation of soldiers have programs to help take on post-return challenges. But he said that sometimes returning service members are not taking that help.

“We did it alone because we didn’t have a step-down program to help us transition,” Tennant said. “For people coming home today, it is something you have to do. It’s a must.”

Richards credited the Archer AMVETS post as a crucial step towards finding work and carrying out a normal life.

“You may not even like the guy but you respect the fact what he went through,” Richards said. “You can talk to him, even though you don’t like him, and you’re on the same wavelength.”

Even with generational differences, the experiences are what connect us, said Richards.

Visshaael is a reporter for WUFT News who can be reached by calling 352-392-6397 or emailing news@wuft.org.
Previous Gainesville Cohousing Offers Alternative Community Lifestyle, Partners With UF Landscape Architecture Students
Next Remembering The Forgotten Children Of Babyland