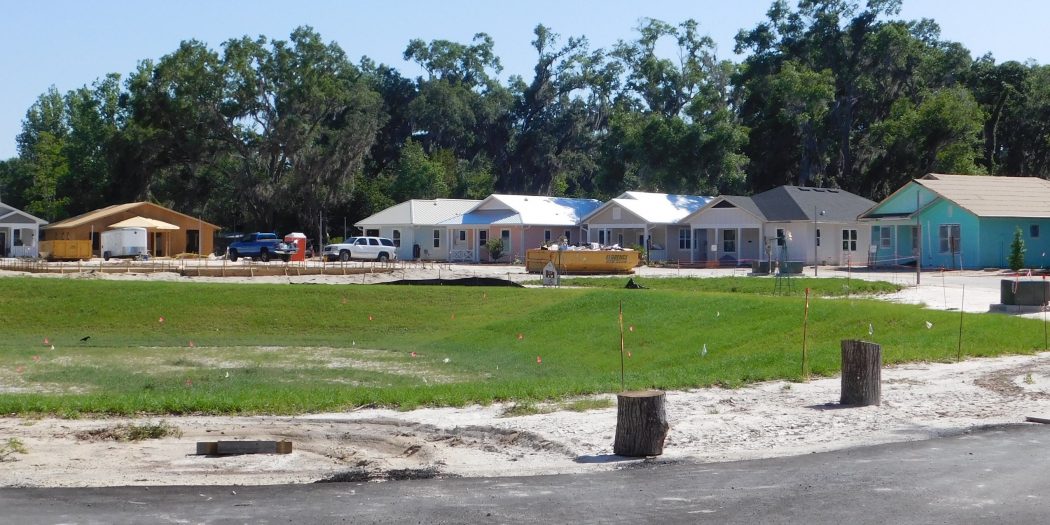 Gainesville Cohousing, the first community of its kind in in Gainesville, is partnering with University of Florida students to complete its development.

Cohousing refers to a community designed to promote communal living, said Gainesville Cohousing founder Brooks Nelson. Residents of Gainesville Cohousing, located at 4500 NW 27th Ave., will share access to a common house that Nelson describes as a “clubhouse on steroids,” as well as a community garden, pool, lawnmower, kitchen and dining hall where they will share biweekly meals.

“The ‘co’ in cohousing is for cooperative,” Nelson said.

When Nelson and his wife decided to develop a cohousing community in Gainesville nearly seven years ago, they received interest from friends and local businesses. Twenty-three of the 24 home lots have now been filled, and two families have already moved into the community. Nelson said Gainesville Cohousing is an intergenerational community, though the current demographic shifts toward older adults.

By the end of 2018, Nelson projects that construction, which is now about halfway done, will be completed and all of the residents will be moved in.

One thing that sets Gainesville Cohousing apart from similar communities is that it was predominantly designed and developed by the community members who plan to live there.  Members meet weekly to discuss the progress of the development and vote on different aspects of design and community welfare.

To become a member of the Gainesville Cohousing community, potential residents must become a “participating member,” through a process that includes paying a $250 nonrefundable fee. After becoming a participating member, potential residents can apply to become “equity members” for a $7,500 fee that goes toward their home in the community. On average, homeowners spend $250,000 to live in the community, with the primary cost being a custom home.

In line with its focus on cooperative living, Gainesville Cohousing aims to create an environmentally conscious community with the help of the UF Office of Sustainability, Nelson said.

The majority of Gainesville Cohousing residents will be using solar power, although some will be using natural gas. Many residents plan to use rain barrels to save water, and the community has agreed to cut down on waste by composting and managing a community garden.

“Small homes is actually one of the most important things you can do (to be environmentally friendly) from both building products and energy footprint, so our homes generally are smaller and we take advantages of the shared public space,” said Robert Christianson, a Gainesville Cohousing homeowner and project manager for construction.

The square footage size of Gainesville Cohousing homes range from 772 to 2,344, according to the association’s website.

Christianson explained that each home is being constructed with sustainability in mind at every step. Sustainability measures include well-insulated homes, metal roofing and high-efficiency heating and air systems.

The community will also offer charging stations for electronic cars, and it is implementing Florida-Friendly Landscaping protocol to create a functional landscape with minimal environmental impact, Christianson said.

Students in the University of Florida’s landscape architecture graduate program are designing a portion of the community landscape.

“We invited ourselves to be the subject for a class this semester,” Christianson said. “They are doing an overview vision landscape architectural plan for our entire community, and they’re also doing individual home landscaping plans.”

The plans will be complete by the end of April, Christianson said.

Michael Volk, a research assistant professor in the department of landscape architecture, is overseeing the students working with Gainesville Cohousing. Volk has been meeting with Christianson and other community members since the fall of 2017 to organize the collaboration.

Volk said that the students in his planting design studio have tackled the project by visiting the site, investigating what plants would be both beautiful and functional within the existing environment, and by consulting with the community residents on their particular preferences. They then compiled the information to create plans for the site.

“We had a number of the residents come to the University of Florida, to our studio, and we had presentations,” Volk said. “They were informal presentations where we invited a lot of feedback, and we wanted feedback from them.”

Students used that feedback to alter the final community design.

“We want to create landscapes that increase the quality of the community and the ability for people to interact with each other and to build a sense of community among the residents,” Volk said.

Emma is a reporter for WUFT News who can be reached by calling 352-392-6397 or emailing news@wuft.org.
Previous April 25, 2018: Morning News In 90
Next Reception For Returning Veterans ‘Far Different’ From 20 Years Ago