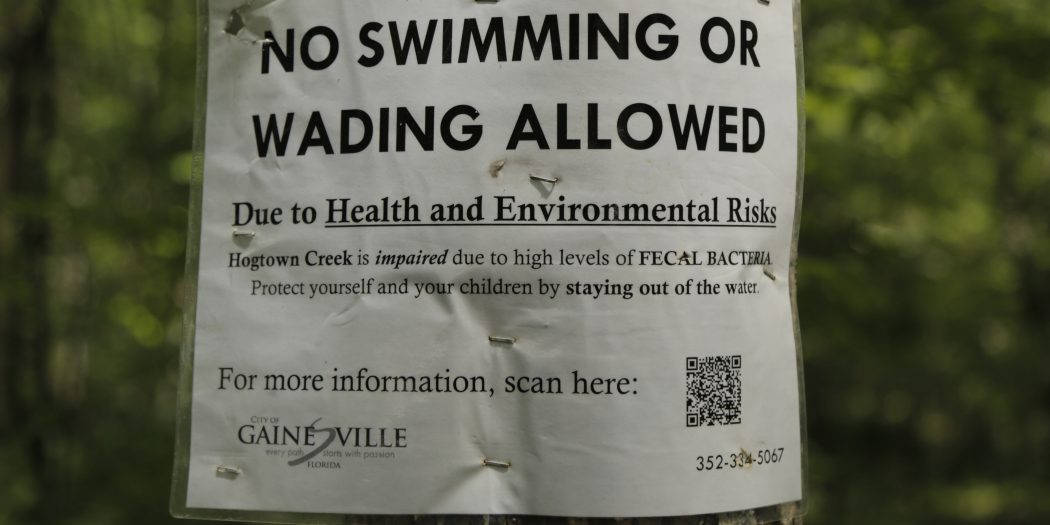 A notice is posted on a tree entering Loblolly Woods Nature Park warning hikers to stay out of Hogtown Creek on the northwest side of Gainesville due to high levels of Fecal Bacteria. [Kaila Jone/WUFT]

Volunteers Collect Thousands of Pounds of Trash From Gainesville Creeks

As many as 150 volunteers with Current Problems Inc., a non-profit organization with a mission to protect water resources in North Florida, recently collected 6,590 pounds of trash from creeks around Gainesville.

With most of the trash coming from Hogtown Creek and its tributaries, volunteers picked up 1,184 pounds of trash from an area of the creek at Loblolly Woods Nature Park north and south of Northwest Eighth Avenue.

Megan Black, executive director of Current Problems, said that back in December the group cleaned up over 200 pounds of trash from the same area.

“This is an ongoing thing. The area floods easy,” Black said.

Ellen Staples, a resident living along Hogtown Creek on the northwest side of town, said she had concerns of the trash accumulation following Hurricane Irma, which Black thinks most of the trash came from during the recent trash collection.

“There was trash everywhere – In trees, over your head –  because the water was so high,” Staples said.

Staples team collected 821 out of the 1,184 pounds collected from the Loblolly Woods Nature Park.

The creek brought so much stuff from everywhere, she said, including tires, pieces of siding, flip-flops and soles of shoes.

Staples noted the abundance of Polar Pop cups – a styrofoam beverage container available at Circle K convenience stores –  she finds floating down the creek that flows past her property.

Indeed, Black said, the number one item, that she finds during creek clean-ups are the Polar Pop cups.

“I think it’s because they are so cheap, and they’re so lightweight that they fly away easy,” Black said.

Sally Adkins, Gainesville Clean Water Partnership coordinator, said the organization has financially supported Current Problems for about 15 years. The partnership, in collaboration with Gainesville, Alachua County, and the Florida Department of Transportation District 2, financially invested about $200,000 in Current Problems, a non-profit organization, from 2003 to 2017.

“We came together to collectively meet requirements of the Clean Water Act,” Adkins said.

The U.S. Federal law regulates the release of pollutants into all waterways in the United States.

The partnership meets all the requirements of the Clean Water Act for the National Pollutant Discharge Elimination System (NPDES), Adkins said.

According to the Environmental Protection Agency, NPDES addresses water pollution by regulating the source of the pollution that enters the waterways.

However, Staples said, the larger issue for her than just trash is the fecal contamination in Hogtown Creek.

“I grew up walking in this creek because there are a lot of sharks teeth in here,” Staples said. “Kids are just always in the creek every single day, and I don’t think people are aware of how much contamination is in the water.”

Adkins said, their partnership focuses on pollutants of concern in areas that are defined by the EPA and the State Department of Environmental Protection, which are nutrients and fecal coliforms around the creeks.

“We have identified certain “hot spots” in the Gainesville urban area, that have consistently high fecal counts,” Adkins said.

The partnership works in collaboration with different agencies to try to find the source of these coliforms.

“Everybody is trying to make sure there is not pollutants going into our system and creeks,” Adkins said.

“We want to protect the source of our drinking water,” she said. “We want it to be as clean as possible as it goes into the aquifer. That is something that everybody should try to be aware of minimizing your use of fertilizers, be responsible with your grass clippings and yard wastes, picking up after your pets, washing your car with the least amount of biodegradable soap as possible.”

It’s even better to take your car to a car wash where the water is going to be processed through a wastewater treatment system, Adkins suggests.

Black tells the volunteers cleaning the creeks to be aware of the pollution in the creek and advises them not to enter the water.

“We all live in a watershed,” Black said. “Your water in your yard, even if you don’t live near a creek, can still end up in a creek.”

Black said although she can’t see Tumblin Creek from her home, she still lives in a watershed and anything that she does impacts the creek.

Hogtown Creek is our drinking water, Black said. It flows through Gainesville to Split Rock Conservation Area off Southwest 20th Avenue and goes back down into the aquifer.

“Gainesville is Hogtown,” Black said. “That is the nickname for Gainesville and that is one of our main creeks.”

The non-profit wants more outreach and education on the local fresh water source.

“If you want to have a pretty yard that’s fine, but there’s something you can do to mitigate the problems with adding fertilizers to your yard,” Black said. “If you absolutely have to do it, plant some native plants.”

Native plants along a waterway can help remove nutrients before the water goes down into the creek.

“It won’t entirely eliminate the problem,” Black said, “but it will help greatly.”

Kaila is a reporter who can be contacted by calling 352-392-6397 or emailing news@wuft.org.
Previous April 24, 2018: Morning News In 90
Next County Animal Shelter Kill Rates on Downward Trend for North Central Florida Counties