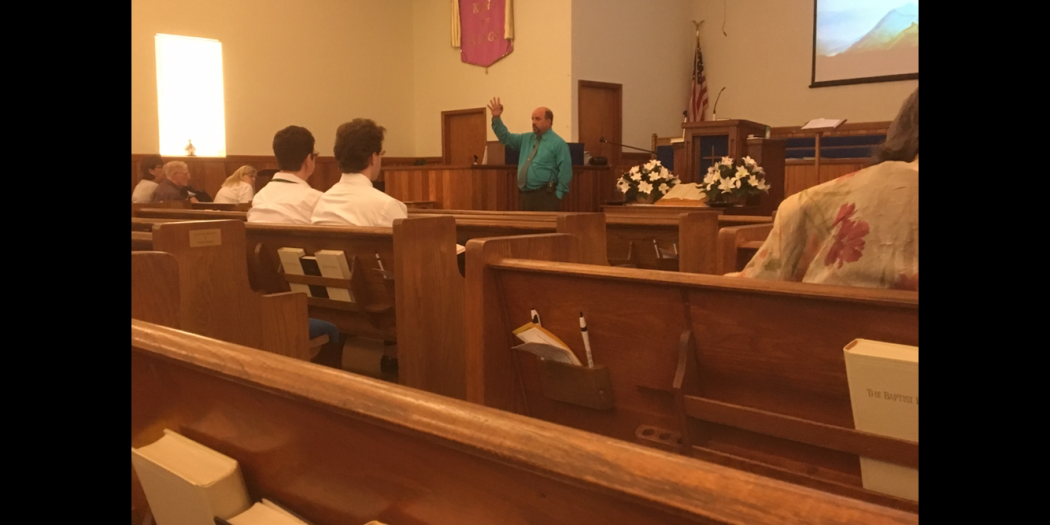 Being a small church with little funding, Slocumb said he faces challenges when it comes to paying some of its bills, including the city’s stormwater assessment fee, which costs him close to $2,000 per year. He pays less than two-thirds of this annually for electricity.

“We’re a small church, and financially, we struggle sometimes to pay our bill,” Slocumb said.

The church is within city limits, so it does not pay the Alachua County stormwater assessment fee, which was passed in 2017. That fee covers unincorporated areas of the county.

“The city’s aging drainage system was in need of significant repair and replacement,” Frieg said in an email. “Existing revenue sources were insufficient to provide the necessary funding.”

Public Works maintains a database containing data on a property’s impervious area. According to the city’s Land Development Code, an impervious area is defined as any property or part of a property with construction that makes it harder for stormwater to seep into the soil. Features that add to this figure include buildings, parking lots, driveways and walkways.

Slocumb said one thing that confuses him is that stormwater runoff is added to the main church building, the sanctuary. But it is not added to the other two buildings on the property, which are used for educational purposes, such as Bible study.

Slocumb claimed that whenever it rains all the runoff collects in the middle of his property and does not go to the stormwater system in the street because the soil is sandy.

Frieg said the fee calculations for the Pine Grove Baptist Church comes out to about $168 per month, which includes the property’s three buildings and concrete walkways.

Additionally, it has a grassed, vacant space used as a parking lot. This increases soil compaction and water runoff, Frieg said.

Since the fee is not a tax, it applies to all properties, even those that are tax exempt.

Chris Bird, director of the Alachua County Environmental Protection Department, said part of the fee is used to help with keeping the watershed and drinking water supply clean.

Water that seeps into the land can typically be cleaned naturally, while runoff typically carries more pollutants such as phosphorus, nitrogen, and dirt, he said.

“The concern is that when you have polluted stormwater running into our lakes and springs, the pollution is very expensive to clean up,” Bird said.

Stormwater runoff can lead to polluted creeks, lakes, streams and aquifers and unsafe drinking water. The city charges the fee to ensure that the water remains clean.

Bird said the aquifer under Gainesville provides water to the springs in the surrounding area. With nitrogen and other pollutants running off into the Santa Fe River, this has caused algae blooms and decreased the water quality of the springs.

Frieg said that some nonresidential property owners, such as Slocumb, may be able to dispute part of their stormwater runoff utility by requesting a review of their fee. The customer would have to provide documentation detailing the property’s topography, site plan, and stormwater management system, all evaluated by professionals, she said.

Pine Grove helps at Grace Marketplace, but struggles to hire services when it needs a roof repair, repainting, floor remodeling or any other maintenance work done.

“We’re not a built church who has money and can buy stuff any time we want it. We have to count our pennies on everything we buy,” Slocumb said.

Still, while Slocumb said he recognizes the importance of the utility for its role in environmental protection, he would like to see his bill reduced by half.

“I know the bill wouldn’t be cut out, but reducing would help tremendously,” he said.

Bryan is a reporter for WUFT News who can be reached by calling 352-392-6397 or emailing news@wuft.org.
Previous County Animal Shelter Kill Rates on Downward Trend for North Central Florida Counties
Next A Blood Plane: How Air Travel Solved LifeSouth’s Distribution Problems