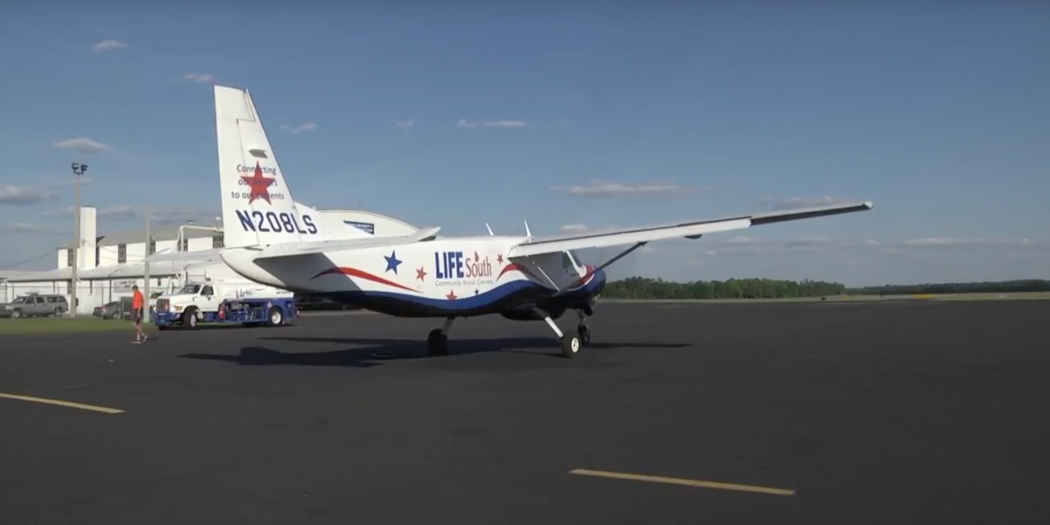 Every night, the blood plane flies from Gainesville to Hudsonville, to Atlanta, Birmingham, Montgomery, mobile then back home, buy a little bit of fuel on the way. (Daphna Krause/WUFT News)

Nicknamed ‘the blood plane’, LifeSouth Community Blood Center’s single-engine turbo prop plane has been saving lives throughout the Southeastern region of the United States for the last 15 years.

The plane transports blood eight hours a night 363 days of the year, completing more than 165,000 missions and counting.

This power house of blood distribution was an idea that grew out of necessity, according to Christine Medina, Director of Recruitment for LifeSouth.

“When I first started with LifeSouth, we used long distance vans to transport products, test tubes, and supplies from region to region,” said Medina, adding that it takes a quarter million donors to supply enough blood to the hospitals they serve.

As LifeSouth’s footprint grew, so did the need for better transportation.

That’s when Dr. Mike Lukowski stepped in, coming up with the idea of buying a plane as a solution. Lukowski, a retired OB/GYN and UF Medical School graduate, is a LifeSouth board member. He is co-founder and owner of the University Air Center, where the plane originates.

“That began our journey that we are on now, where we fly that plane that I’m standing in front of every night but two in the year, for about a thousand miles, to carry blood and blood products around the Southeast to serve all those patients,” Lukowski said.

The plane is housed at the University Air Center at 4701 NE 40th Terr., located near the Gainesville Airport.

“All of its maintenance and flight checks happen in-house, making for a smoother operation,” Lukowski said.

The plane, which also transports organs and staff as needed, solves many of the problems that come with land transport, he said. Drivers don’t need to contend with long, late drives, and traffic won’t stop supplies from reaching their destination on time.

“It also reduced the amount of time it took to get those units tested and available for the hospital,” said Medina. Blood platelets are only good outside the body for 36 to 48 hours, with a large portion of that time going to processing and testing, so air travel allows blood to reach patients faster.

The plane leaves the University Air Center at 6 p.m. every day, completing the trip at around 2 a.m. It services Florida, Alabama and Georgia.

“We’re able to collect the tubes from all of our regions and send them back here for testing,” she said. “We are able to move a limited but necessary amount of supplies quickly and efficiently and our drivers are safer because they are not on the road all night.”

The current plane, with 18,000 hours of air time under its belt, has the capacity to carry about 1,500 pounds of cargo.

“Other people tell us it’s one of the most heavily utilized caravans in the whole world,” Lukowski said.

LifeSouth is more than 40 years old, and had been relying on ground transportation for 25 years.

“Our kind of Cinderella story is that we were started by the Civitan group right here in Gainesville in 1974 and we have just grown as the hospitals’ needs grew,” Medina said.

Daphna is a reporter at WUFT News who can be reached by calling 352-392-6397 or emailing news@wuft.org.
Previous Pastor Owner Expresses Conflict Over Environmentalism, Economics in Stormwater Bill
Next Poe Springs Park, Closed Since Irma, To Reopen By Memorial Day