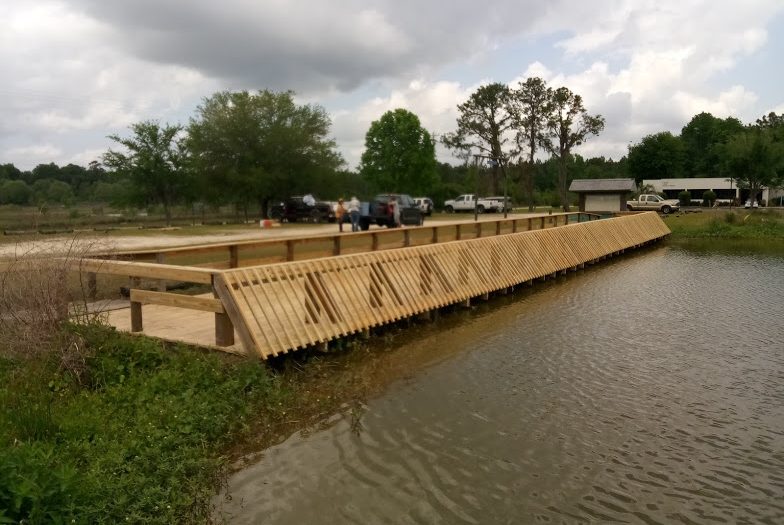 A Gainesville teen on Saturday led a group of more than two dozen volunteers in the rebuilding of the 80-foot-long IFAS Fisheries Dock for his final Boy Scouts rank.

Local businesses provided donations to fund the project, which required over 208 wooden boards and roughly $2,000 in materials.

Felipe Quintana has been a member of Boy Scouts since he was 6 years old. As a Scout, Quintana has progressed through the organization earning six out of the seven possible ranks: Scout, Tenderfoot, Second Class, First Class, Star and Life.

The highest is Eagle, a rank not typically sought after by Scouts under 17, but for the 13-year-old conservation and marine-life enthusiast, seeing the state of the IFAS Fisheries Dock, located at 7922 NW 71st St. in Gainesville, inspired Quintana to take on a project worthy of the Eagle achievement.

“It was when I came out here for service hours for Boy Scouts, we were cleaning up some hydrangea bushes, we were filling up hot dog bags, we were redoing some cane polls,” Quintana said. “This dock has been here for about 16 years, and we kind of noticed how run down it was.”

Ricky Quintana, Felipe’s father, said after his son got the idea, he started reaching out to IFAS staff and community members to see how he could make the project work.

“He had to organize it, he planned it, and it’s been going on now for about a year,” Ricky said. “To be able to get his Eagle Project, he had to design a plan and go to a committee and have it approved before he could do anything.”

Quintana was able to organize the project through Fishing for Success, a part of IFAS’ Extension and Outreach Program which works to educate children about aquatic environments and how to fish. The program hosts free fishing days for families, a monthly event which has brought Quintana and his father to the site since he was 3 years old.

Through FFS, Quintana met biologist and Events and Education Coordinator, Crystal Hartman, whom he first approached about the project. The two previously worked together for his Life rank conservation efforts and she immediately thought of the dock and suggested the idea to Quintana and his mother, Kelly, Hartman said.

“Felipe and his mom really stepped up and took a hold of the project,” Hartman said. “In a matter of 8 hours, they basically have stripped the dock and almost completely rebuilt it.”

Dr. Charles Cichra, Fisheries Specialist with IFAS and director of FFS, said the facility’s man-made ponds see around 8,000 kids and about 4,000 people a year who come out to fish, a number of whom are handicapped and in wheelchairs.

“The big issue is that it was almost 20 years old and it was becoming unsafe. There were screws sticking up and boards warping and splintering,” Cichra said.

He said the new dock will provide an updated place for people to use without worrying about getting hurt.

For the final step in his Eagle Project, Quintana will host a fish fry and educational day at the IFAS Fisheries on May 12 to recognize the sponsors and offer an opportunity for the public to use the dock. He said that although it was for his Eagle Project, rebuilding the dock was a way for him to give back to the community.

“I wanted to bring that to a better state,” Quintana said. “It gives a lot of people the opportunity to learn what I did: how to fish and a lot about aquatic life.” 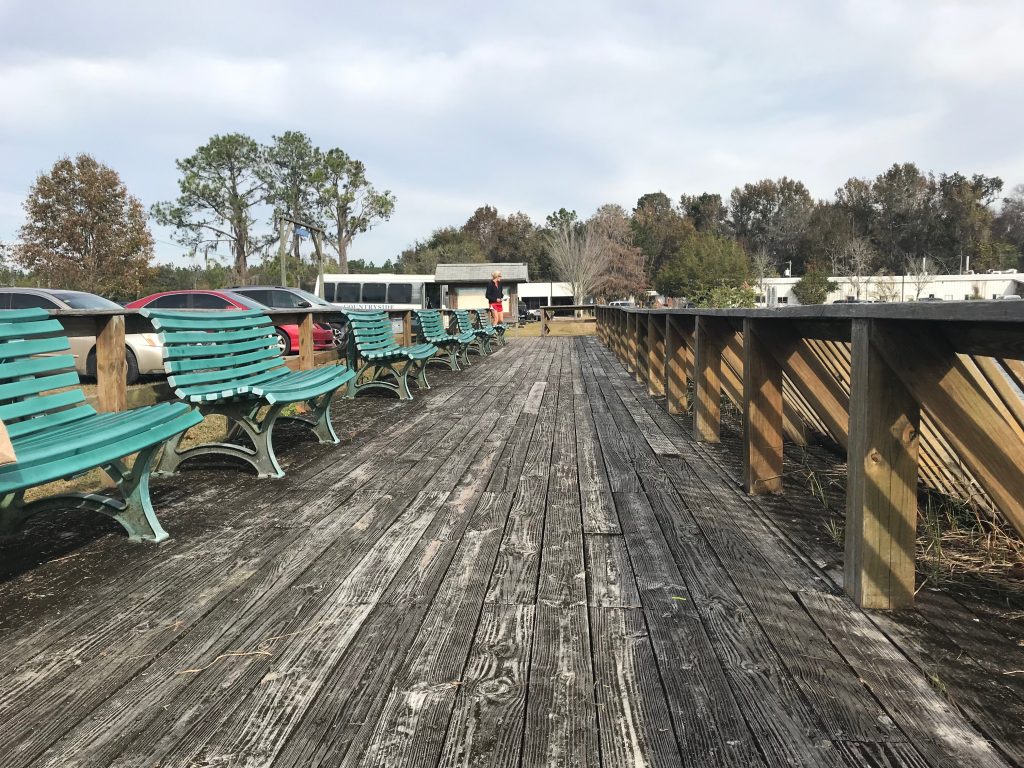 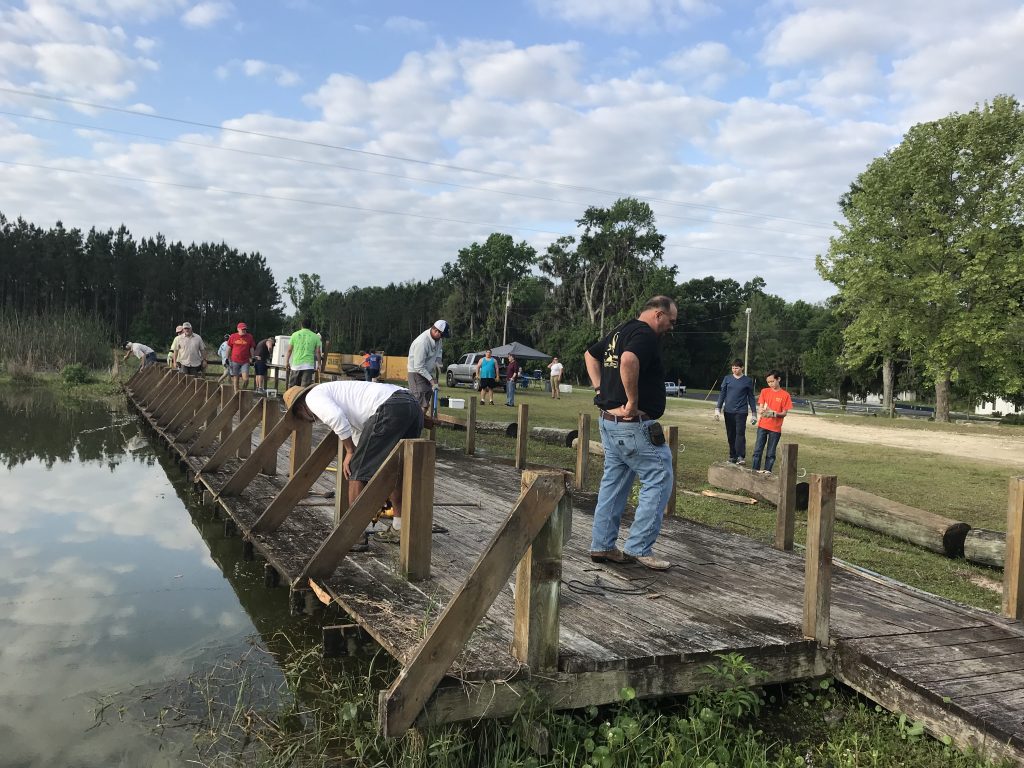 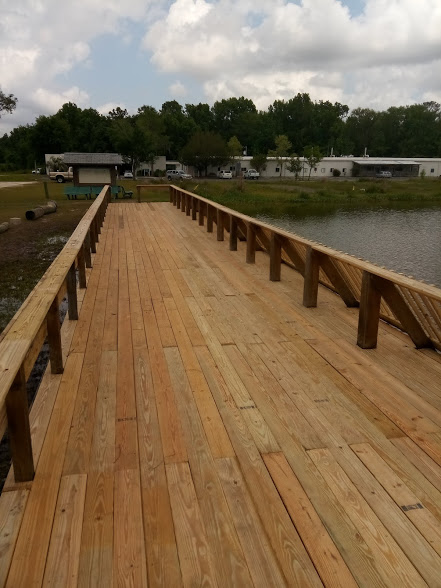 Valerie is a reporter for WUFT News who can be reached by emailing news@wuft.org or calling 352-392-6397.
Previous UF Health And Art Students Team Up For Unique Solutions For Medical Issues
Next Apr. 23, 2018: Morning News In 90