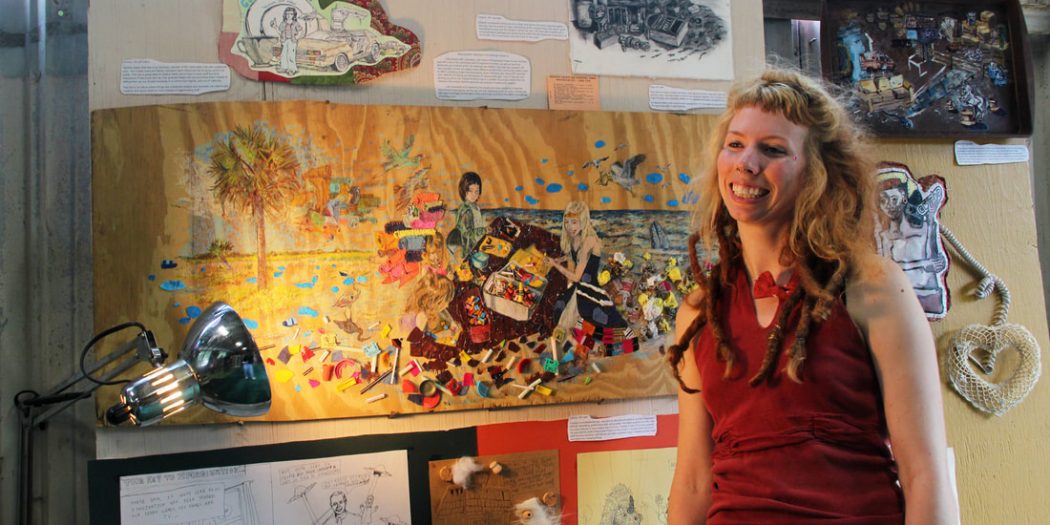 When Sarah Goff walks along Calf Pond Creek near her home in Gainesville, she isn’t looking for pretty stones or exotic plants. She’s looking for garbage to turn into art.

It was a coming-out party for a new gallery featuring art made from at least 75 percent reclaimed and recycled materials.

Dozens of eyes gazed upon what Goff, 41, a co-founder and artist at Repurpose Project, a nonprofit organization located on Northeast 23rd Avenue, had produced, even if some of them didn’t know at first what they were looking at.

The gallery was nearly four months in the making. Located next to Repurpose, it was created to expand the facility’s reputation beyond that of a thrift store.

Goff co-founded Repurpose in 2011 and believes that after seven years of growth it’s ready to move forward with a community center that would promote the togetherness, mindfulness and creativity lost in a society imbued with technology and consumerism.

Peyton Huff, 26, an employee at the facility, said the center is intended to be a multifunctional space that hosts community workshops, art showcases and live shows.

“Part of our mission is diverting useful resources,” Huff said. “We want to focus on the other part which is teaching people how to do so.”

The gallery opening will be the first of many events to take place in the “ever-shifting space,” Goff said.

Also popular at the gallery opening was a series of drawings by Kylee Jo Skimore, 25, a spring art intern at Repurpose. Skimore’s art, “The Trash Princess, Skye,” was inspired by the interviews she conducted with workers, volunteers and customers at the facility. It was based on the alias of another project employee, Trash Princess, who teaches children the importance of waste management in a dress made of reused materials. It was pieced together from used plastic, straws and cotton pinched and twisted into strips, squares and circles.

“My drawings are really interested in the impact and spirit of this place,” Skimore said. “I’m interested in evoking the sense of community.”

Skimore and fellow intern Yaneisy Reyes helped restore what was once a storage room.

“Gainesville is so green literally,” said Reyes, a UF junior majoring in graphic design and visual art studies. “It only makes sense that we become greener eco-friendly wise.”

She said she’s proud to help build a space where people can learn to take control of objects and find creative uses out of them. She believes the internship has made her more aware of how her art already deals with these issues. She’s used Scantrons from old exams in past artworks, and continuously stuffs empty cereal boxes under her bed for future projects.

Inspired by her Cuban-American upbringing, in which people developed “creative ways of filling the gap of want versus need,” Reyes said she most wants to educate customers on environmental issues and how to find treasure in someone else’s trash.

She debuted her series, “Reconsumerism, 2018, pen, coffee and dried markers on paper,” which she said was designed to combat the “pervading attitude of ‘new is better,’” and document items found around the facility and imagine ways to repurpose them.

“By reimagining and recreating the way we use our stuff, we can save our money and our planet, accomplishing way more by using way less,” Reyes said.

UF students unveiled a mobile maker’s space that they spent over 90 hours turning a demolished trailer into a place to house art-appreciation workshops for children. The space includes an overhead made with a reused pegboard that architecture major Alex Dominguez, 21, calls the “disco door.” On sunny days, light comes through each hole, creating a disco ball effect.