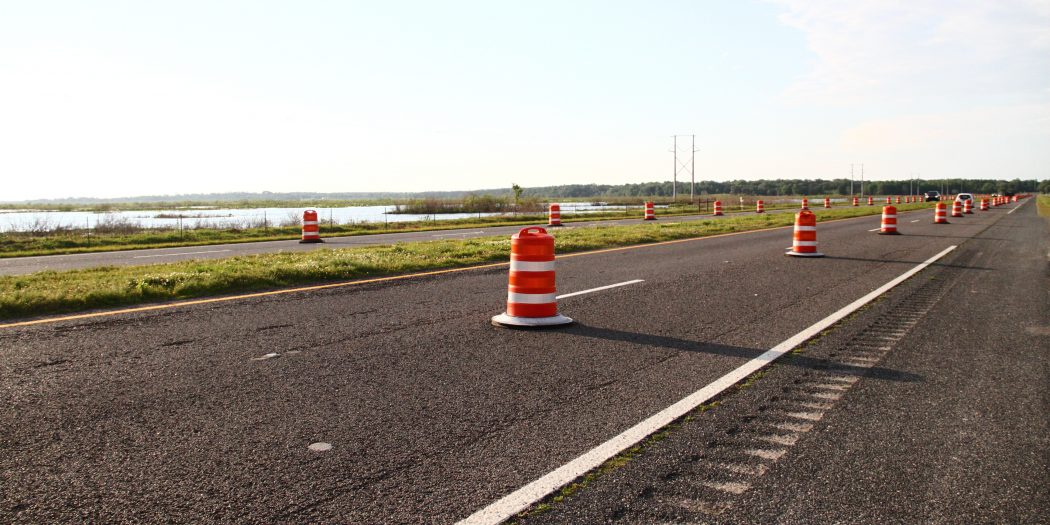 Why U.S. 441 Across Paynes Prairie Is Still Just One Lane

This story is a part of Untold Florida, a WUFT series based on audience questions.

As rainy season is fast approaching, the two outside lanes on 441 beside Paynes Prairie will remain closed until sustained dry weather arrives.

Florida Department of Transportation (FDOT) spokesman Troy Roberts said tests on the strength of the road are conducted every few weeks, but with recent record-breaking rainfall on April 10, there is no hope for opening the lanes until dry weather returns.

“As far as I know, I don’t think we’ve ever seen anything like this,” Roberts said.

The two outside lanes on 441 south of Gainesville have been closed since the end of September 2017, after Hurricane Irma caused major flooding in the area.

Even though there isn’t visible water on the road, the base layer underneath the asphalt has been absorbing water like a sponge, weakening the road, he said. If cars were allowed on that part of the road, it may damage it, forcing FDOT to shut down the road again to resurface it.

Above: A timeline shows the impact flooding has had on 441 over the course of time before and after Hurricane Irma.

“We are at the mercy of mother nature – we can just hope we get drier sunny weather to dry the base layer,” he said.

The lanes may not be open, but Roberts isn’t concerned about the upcoming rainy season.

“Unless it’s a particularly rainy season, let’s say we open the road in two weeks, it would take a significant amount of rain to impact it again,” he said.

However, if it does get to the point where FDOT must close the road again after reopening it, that’s what they will do, he said. Once the outside lanes are reopened they will test the inside lanes as well to ensure that they’ve held up also.

“The good news is we haven’t really had a lot of complaints about the road being closed,” Roberts said. “We haven’t had any traffic impacts.”

I-75 and the lanes that are open on 441 have been able to manage the traffic that is on the roads, he said.

Meanwhile, animals of Paynes Prairie are enjoying the high water, according to park manager Donald Forgione.

“Now that it’s spring, the pastures are green and the animals are happy,” he said.

The high water in the prairie is a cyclic condition, Forgione said. The last time the prairie saw water levels like these was after Hurricane Jeanne in 2004.

“Since man has been recording, this land has been called Paynes Prairie or Alachua Lake, depending on what condition it was in when they saw it,” he said.

The park staff had been providing the horses, bison and cattle with hay for three months, but since Spring, there was no need to keep feeding them, he said.

“The water has gone down in the prairie, that gives them more room and spring has arrived so they have more to feed on,” Forgione said.

Residents nearby said there hasn’t really been any effect on their land. Michael Miller, a worker at Goodwin Company reported buffalo on the property, but only back in Fall of 2017.

In regard to the levee breach from Orange Lake to Newnans Lake, the flooding it caused was only temporary, and it was fixed shortly after Hurricane Irma.

Cat is a reporter for WUFT News and Fresh Take Florida who can be reached by calling 954-657-3385 or emailing cgloria@ufl.edu.
Previous April 17, 2018: Morning News In 90
Next New Agricultural Program Seeks To Benefit People With Disabilities